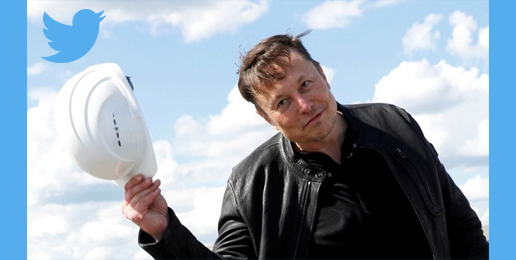 The ugly truth about leftists is that their desire for freedom extends only to members of the hive. Only worker bees enslaved to the drag Queen should be permitted to speak in the virtual public square. If Americans didn’t realize that before, they sure know it now from the unhinged responses of leftists to Elon Musk’s purchase of Twitter. They don’t fear that Musk will clamp down on speech, or that he’ll create new algorithms that censor “progressive” speech, or that Twitter will ban news stories. No, they fear Musk will allow free speech on Twitter, including speech leftists hate, which leftists call “hate speech.” They unjustifiably fear Musk might treat leftists like Dorsey and Zuckerberg have treated the right.

One of the most eye-popping responses to Musk’s purchase came from MSNBC host Ari Melber who appeared completely ignorant of the irony dripping from his lips:

If you own all of Twitter or Facebook or what have you, you don’t have to explain yourself, you don’t even have to be transparent, you could secretly ban one party’s candidate or all of its candidates, all of it nominees. Or you could just secretly turn down the reach of their stuff and turn up the reach of something else and the rest of us might not even find about it till after the election.

Twitter employee and proud illegal “Latinx” Laura i. Gomez shares Melber’s concern that a free Twitter may prevent leftist candidates from being elected:

A M*sk-owned Twitter is one of the greatest threats to the 2022 and 2024 elections. We are f*cked if this happens.

What leftists most hate is the possibility that Americans will now be able to express freely their beliefs about topics like homosexuality, marriage, “trans”-cultism, and racist “anti-racism.” Leftists think conservative beliefs on these topics are offensive, destructive, and dangerous and want them censored, while they—leftists—should remain free to share their beliefs, which half the country finds offensive, destructive, and dangerous. Leftists arrogate to themselves the right to decide for the entire country which beliefs are hateful, dangerous, and should be censored.

Since the lion’s share of banning and shadow-banning by social media platforms pertains to dissent from their views of sexuality, a few words on that topic are in order.

For the umpteenth time, believing homoerotic acts or cross-sex impersonation are immoral and harmful does not constitute hatred of persons. Nor are public expressions of those beliefs calls to violence.

(As a relevant aside, no public schools promote “acceptance” of these forms of “love”—not even in the service of diversity, inclusion, and tolerance. And here I thought to leftists “love is love.”)

The so-called “freedom” that Twitter, Facebook, and Ari Melber fancy is not the freedom Americans once cherished and led to the ACLU’s decision in the 1970’s to defend the right of neo-Nazis to march in Skokie, Illinois—the home of many Jews and survivors of the Holocaust. The “freedom” leftists love is the tyranny that fascists everywhere love.

If Americans didn’t fear loss of employment over speaking freely, there would be even more free speech in the virtual public square. And if the ability to make a living in America—particularly in an America run by corporate behemoths—depends on censorship of ideas that leftists hate, the First Amendment means nothing.

Free speech is the bedrock of a functioning democracy, and Twitter is the digital town square where matters vital to the future of humanity are debated.

The ACLU once believed that. In 1968, Eleanor Holmes Norton, a young black attorney working for the ACLU, defended the right of the National States’ Rights Party, a white supremacist group, to hold a rally. Looking back on her decision, Norton said,

Eleanor won that case nine nothing in the U.S. Supreme Court. Ultimately anyone can be silenced. It depends who’s in power at a given moment, who they want to silence, whether they want to silence them for political reasons or for corrupt reasons. There can be all kinds of reasons to want to cut off somebody’s speech. And the only way to prevail in free speech cases is to stand for the principle of freedom of speech, to say that freedom of speech cuts across all ideological concerns, all other concerns, and that if anybody is denied the right to speak, it threatens the right to speak of everybody.

While the left blathers on about justice, they mete out injustice at every turn. For example, leftists talk a lot about the wealthy paying their fair share, but they talk little about how much of their money the wealthy voluntarily redistribute to projects that likely do a more efficient job of alleviating suffering than would a bloated, inefficient, corrupt government bureaucracy unaccountable to the public whose money they waste.

I, for one, am very glad that Elon Musk had a few billion dollars lying around to spend on a worthy project that will help preserve First Amendment rights that leftists have their deceitful and desperately sick hearts set on destroying.