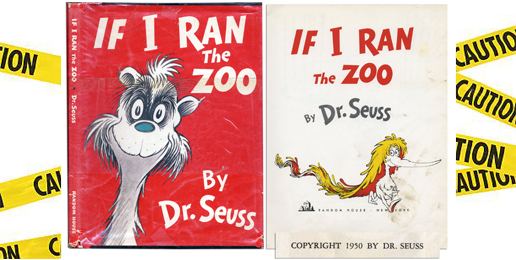 This September 19-25, 2021, the displays in public libraries for the American Library Association’s annual Banned Books Week are going to be overflowing with banned books. In addition to Ryan T. Anderson’s book When Harry Became Sally, and Abigail Schrier’s book, Irreversible Damage, there will be not one, not two, not three, but SIX Dr. Seuss books.

Historically the American Library Association has deemed a book “banned” if a few parents asked for it to be removed from the children’s section to another section of the library. Such a “banning” throws them into a tizzy after which they fall onto their fainting couches. Just imagine how they must feel now that book-burners managed to get the publisher of Dr. Seuss’s books to stop publishing SIX of them. Get those guy, gal, and sexually ambiguous librarians some smelling salts STAT.

What, you may be wondering, did Dr. Seuss write or draw that led to today’s book-burners—also known in Ray Bradbury’s novel Fahrenheit 451 as Firemen (Gotta burn that book next year. “Firemen” definitely hurts somebody’s feelings).

One of the allegedly offensive books is If I Ran the Zoo in which young Gerald McGrew imagines traveling the world to collect exotic never-before-seen animals from faraway places for his zoo. The drawings most intensely drawing leftist ire are one of Asian characters with yellow skin and slanted eyes wearing traditional Asian clothes and using chopsticks, and the other is a drawing of two Africans wearing loin cloths and nose rings as many members of African tribes have historically done.

There is also a drawing of Persian princes wearing Persian garb and one of a Russian soldier with a big bushy beard wearing a Russian military uniform and carrying a bird called the “Russian Palooski whose headski is redski.” But those stereotypes don’t seem to bother leftists all that much.

CNN editor-at-large Chris Cillizza said this about the decision by the publisher of Dr. Seuss’s books to cease publication of six books—a decision compelled by leftist Firemen:

While six of his books will no longer be published, the remaining three dozen or so will still be on the bookshelves. That isn’t a cancellation.

Leftists whine endlessly about stereotyping, suggesting that stereotypes are intrinsically offensive and hurtful. In so whining, they fail to acknowledge that stereotypes emerge from and reflect real phenomena. Stereotypes do not precede and create phenomena. Humans notice differences and categorize phenomena. That’s how the human mind works.

We are expected to worship at the altar of multiculturalism, but multiculturalism is based on the reality that there are distinctives that characterize different people groups. From those differences emerge “stereotypes.” And storytelling often depends on depicting characters that represent the diverse types of groups we observe. That is to say, storytelling depends on stereotypes.

One could argue that the wildly popular television program Will and Grace and movie Black Panther are filled with stereotypes, and yet the presence of stereotypes—that is, characters that represent recognizable types—in those cases is not viewed as either insulting or degrading.

If someone wanted to write a children’s book about a Chinese family, would it make sense to depict the family with big round blue eyes in order to avoid the “stereotype” that Chinese people have brown eyes with slanted monolids?

If we’re going to burn books based on claims that they include hurtful language directed at “authentic identities,” then we’re gonna need one colossal bonfire. Every book that describes theologically orthodox people as “homophobic” or “transphobic” for views on sexuality or marriage central to their identity as Christians needs to be burned.

Former president of the American Library Association’s Office for Intellectual Freedom (ALA OIF), the much-revered Judith Krug, once said this in an interview:

We have gone through periods where our biggest threats have been from the left of center, where people have wanted to remove materials that did not portray, for instance, minority groups in the way that they thought minority groups should be portrayed. … If we [the ALA OIF] have an agenda, it is protection of the First Amendment.

In that same interview, Krug said something even more salient to the issue of banning the six of Dr. Seuss’s books:

[M]any years ago …  Meshach Taylor made a statement … during a panel discussion that I participated in before the opening of The Big River at the Goodman Theater. Now, The Big River is one of the stage versions of Huckleberry Finn. Meshach Taylor was playing Nigger Jim, and one of the questions that came up from the audience during this panel was, “Do you really feel that Huckleberry Finn is appropriate for young people to read? Given the name of Nigger Jim, isn’t it too embarrassing or too frightening, or doesn’t it raise specters for young people that they would be better off without?” And Meshach Taylor answered, “You don’t know how you got to where you’re at today unless you know where you came from yesterday. And if you don’t know where you came from yesterday to get to where you’re at today, you’ll never know how to go forward into tomorrow.”

Here’s an idea: Stop demanding the banning of Dr. Seuss books. Let them be published and purchased wherever books are sold. And leave all of them on library shelves right behind the drag queens reading stories to toddlers and right next to picture books about Heather’s two mommies and tutu-wearing boys. Then moms and dads can decide which books to purchase or check-out, and read to their children.

It makes a difference!