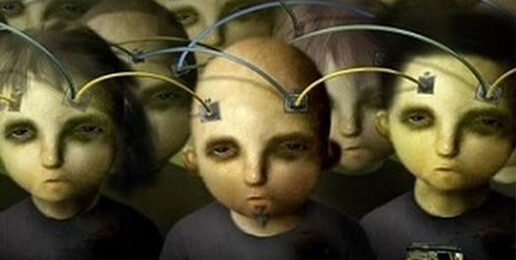 Democrats have long pretended to be the party that fights to protect the little guy, all the while privately cozying up with Big Business, Big Tech, and Big Brother’s Press to oppress the little guys and gals.

Democrat policies decimated the black family and our big cities. Democrats wasted millions of Americans’ hard-earned tax dollars and countless work hours on Russian collusion disinformation and impeachment ruses. And then in de facto collusion with social media mega-millionaires and the corrupt leftist press, the “progressive” Hive threw the election to befuddled Biden and his henchwoman.

But the worker bees shaped by the “progressive” Hive mind are not done yet.

In other words, tolerant, diversity-loving, free speech-devoted leftists seek to ban every outlet and platform for the dissemination of ideas they hate.

Here are the jaw-dropping questions, Eshoo and McNerney are “asking” every company to answer:

1. What moral or ethical principles (including those related to journalistic integrity, violence, medical information, and public health) do you apply in deciding which channels to carry or when to take adverse actions against a channel?

2. Do you require, through contracts or otherwise, that the channels you carry abide by any content guidelines? If so, please provide a copy of the guidelines.

3. How many of your subscribers viewed Fox News on YouTube TV for each of the four weeks preceding the November 3, 2020 elections and the January 6, 2021 attacks on the Capitol? Please specify the number of subscribers that tuned in to each channel.

4. What steps did you take prior to, on, and following the November 3, 2020 elections and the January 6, 2021 attacks to monitor, respond to, and reduce the spread of disinformation, including encouragement or incitement of violence by channels your company disseminates to millions of Americans? Please describe each step that you took and when it was taken.

5. Have you taken any adverse actions against a channel, including Fox News, Newsmax, and OANN, for using your platform to disseminate disinformation related directly or indirectly to the November 3, 2020 elections, the January 6, 2021 Capitol insurrection, or COVID-19 misinformation? If yes, please describe each action, when it was taken, and the parties involved.

6. Have you ever taken any actions against a channel for using your platform to disseminate any disinformation? If yes, please describe each action and when it was taken.

Without a hint of irony, Eshoo and McNerney, card-carrying members of the Ministry of Truthiness, call conservative news sites sources of “disinformation.” No word about the misinformation and disinformation promulgated by Democrats in Congress and their propagandist minions in the press.

And, amazingly, from the crowd that rebukes “judgmentalism” and the notion of objective truth, leftists have arrogated to themselves the right to judge beliefs and then declare for the entire country which ones are true.

Once having declared which moral, ontological, and epistemological beliefs are true for all of America, the bees with their collective Hive mind buzzing, busy themselves with their stinging banning-business. And boy, does it hurt. I mean, girl sexually indeterminate human, does it hurt.

On no issue are the worker bees busier with their banning than on the “trans” issue. And since the minds of Big Business have been melded into the Hive mind, genuine “trans”-truth-tellers–i.e., people who tell the truth about “trans”-cultism–are being censored.

The work of two well-known “trans”- truth-tellers sparked controversial decisions among woke corporate behemoths recently. Those corporate decisions illuminate the dark cultural period the “trans” cult has ushered in, aided and abetted by the cowardice of those who know truth and the ignorance of those who should.

The well-researched and positively reviewed book offers a damning critique of “trans”-cultic beliefs, specifically how the “offensive” and “insipid” redefinition of “female” by the “trans” cult is damaging adolescent girls.

Fast-forward to Feb. 2021 when the news broke that Amazon had quietly stopped selling another important book critical of “trans”-cultism, this one by Ryan T. Anderson and titled When Harry Became Sally: Responding to the Transgender Moment, which Amazon had been selling for three years.

Anderson, founding editor of Public Discourse and president of the Ethics and Public Policy Center, is a political philosopher with degrees from Princeton and Notre Dame. Like Schrier, he is also faultlessly civil and winsome. No forewarning to Anderson and no justification from Amazon representatives when queried about Amazon’s book ban.

Within days of Amazon’s de facto book-banning, Target decided the time was ripe to once again remove Schrier’s book from their rainbow-hued shelves. The sanctimonious, judgmental Target execs refuse to profit from a critique of the “trans” cult that is profiting so handsomely from the confusion, sterilization, and mutilation of children and teens. No siree, those Target execs have standards to uphold—standards that look like a canary-yellow stripe running down their spineless backs. After all, men in dresses can be very scary.

In a December 2020 article titled “Leftists See Orwell’s Novel 1984 As a Blueprint for Progress,” I wrote this:

One of the many remarkable aspects of this time in America is that all the forces of oppression about which George Orwell warned in his novel 1984 are present and growing, and many of the oppressors can’t see it. Ironically, many of the oppressors view themselves as paragons of virtue when, in reality, they’re paragons of virtue-signaling, which constitutes a performative cloak of invisibility that conceals their totalitarianism.

Apparently, leftists read both 1984 and Fahrenheit 451 as blueprints for “progress.”

Some doctrinaire libertarians argue that private businesses should be absolutely free to make any business decision they choose, including choosing to ban tweets, posts, social media platforms, news programs, or books. But such thinking is flawed in an age when the public square is the Internet and gargantuan communication and sales monopolies are controlled by the Hive.

If conservatives cannot disseminate ideas and cannot earn a living if they express ideas the Hive hates, then our first freedoms to speak and exercise our religion freely do not, in reality, exist.

If you appreciate the work and ministry of IFI, please consider a tax-deductible donation to sustain our endeavors.  It makes a difference!

Leftists See Orwell’s Novel 1984 As a Blueprint for Progress