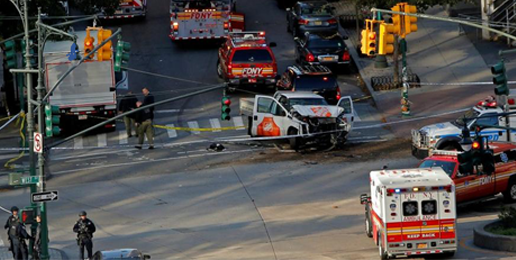 Cultural Marxism and Its Discontents
Written By Robert Knight   |   11.16.17
PRINT

The deadly Islamic terrorist truck attack in New York City on Halloween exposed a cauldron of issues, from national security to immigration policy.

But it’s about much more than that. The attack and its aftermath have shone a light on the Left’s campaign to radically transform America through cultural Marxism. That’s the revolutionary philosophy that aims to cure inequality by destroying traditional Western culture. This includes massive, unrestricted immigration.

Sayfullo Saipov, a 29-year-old Uzbekistan native living in New Jersey, yelled “Allahu Akbar” while mowing down 20 people, killing at least eight on a bike path in lower Manhattan. He came to the U.S. in 2010 via the “diversity lottery” system created as part of the Immigration Act of 1990. Officials say he was “radicalized” by ISIS after moving to the U.S.

As President Trump rightly noted, U.S. Senator Charles Schumer (D-New York), was a prime backer of the diversity program, in which 50,000 foreigners are admitted annually in a lottery. It doesn’t matter whether they love America or hate it.

Before the bill’s passage, Schumer explained that America owes all of the countries of the world a certain amount of guaranteed entry into the United States, an extremely odd quota system that only a fool could advance with a straight face. There is no “right” in the Constitution to immigrate to the United States, and no other nation has embraced this wacky idea.

“There are certain countries that have been left out,” Schumer said.

Schumer’s defenders note that, as part of the Gang of Eight in the U.S. Senate in 2013, he proposed ending the diversity lottery. But it was only because he was trying to ram through a liberalized immigration reform bill.

Why do progressives promote diversity over unity, multiculturalism over American heritage, sexual anarchy over marriage, and applaud when people speak languages other than English?

The answer is that it ripens the field for identity politics and is part of the cultural Marxists’ goal to radically transform America. Like Obama’s former pastor the Rev. Jeremiah Wright, some appear gleeful each time our country suffers a terrorist attack because “America’s chickens are coming home to roost.” We have it coming, right? They actually believe that America is free and prosperous not because of our foundational values but because other countries are a mess and it’s our fault.

Liberals and conservatives used to disagree about means but not so much about ends – a freer, more prosperous society in which character and hard work count more than skin color. But no longer. The hard Left’s cultural Marxism has replaced yesterday’s liberalism. They laugh at equal opportunity and demand racially determined outcomes. Disagree, and you’re a Nazi. Or worse, a Christian.

In Mr. Schumer’s New York City, officials have floated the idea of allowing noncitizens to vote in city elections, just as they do now in at least ten Maryland jurisdictions.

In California, as a recent Washington Times editorial noted, 44.6 percent of residents aged five or older speak no English at home. In Texas, 35.6 percent speak another language at home, and another 14 percent are “English-impaired.” Several states have populations where more than 30 percent do not speak English. In fact, more than one-fifth of the entire U.S. population doesn’t speak English.

Most immigrants are hardworking, here legally, and love America. But unlike earlier immigrants, they are being told by the Left not to assimilate. Can the wholesale rejection of a common language be a good thing? Only if you are sowing the seeds of identity politics and cultural upheaval.

Earlier this month, the Latino Victory Fund unleashed the most vicious political propaganda since the anti-Goldwater spot in 1964 in which a little girl picks daisies as a nuclear bomb goes off.

The ad depicts a driver in a pickup truck with a Confederate flag, a Tea Party license plate and a Gillespie bumper sticker bearing down on minority children. Ed Gillespie was the GOP candidate for Virginia governor. As the truck is about to kill the frightened youngsters, one of them in Muslim garb, a child awakes from the nightmare. Voiceover: “Is this what Ed Gillespie and Donald Trump mean by the American Dream?” The screen says: “Reject Hate.”

This despicable ad that backs Democrat gubernatorial candidate Ralph Northam, who is not mentioned but whose campaign listed it as a contribution, does more than slander Mr. Gillespie and President Trump. It’s aimed at any Americans who resist the cultural Marxists’ campaign to turn America into a socialist Babylon.

The anti-Gillespie “murderous trucker” ad was quickly withdrawn after the terrorist truck attack in New York.

I guess they wouldn’t want people to start thinking too hard about how we came to this.