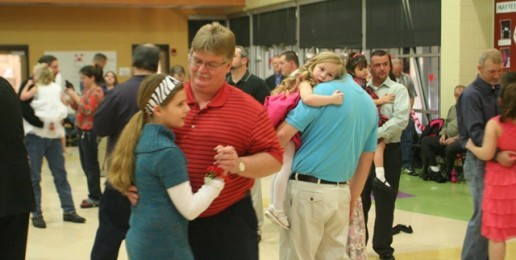 ACLU Attacks Father-Daughter Dances: Why and Does it Matter?
Written By Laurie Higgins   |   10.09.12
PRINT

The administration of a school district in Cranston, Rhode Island, just a stone’s throw from the high school sued by the atheist teen over a banner on which was written a prayer that made her feel “unwanted,” was recently reprimanded for hosting its longstanding annual father-daughter dance because it supposedly violates the city’s anti-discrimination policy which prohibits discrimination based on gender in all school activities.

Although, the dance took place, the district apologized for this grievous offense to the sensibilities of sexuality anarchists.

Discrimination or Stereotyping: What’s the problem?

Even though the school agreed to offer an equivalent activity for boys (i.e., a mother-son baseball game), the gender deconstructionists at the ACLU were not satisfied. They sent a letter to the school which stated in part:

A dance for girls and a baseball game for boys, particularly in light of the stereotypes they embody, are not, we submit, ‘reasonably comparable’ activities….To the contrary; the stereotypes at their core undermine the goal of school anti-discrimination laws.

So, the goal of school anti-discrimination laws is to eradicate stereotypes? By stereotypes, the ACLU means any recognition that there are differences between boys and girls. I wonder what these stereotype-haters think of Will and Grace and Modern Family, which make their bread and butter by recognizing, promoting, and celebrating stereotypes of homosexuals. And since when is stereotype-eradication the proper role of any law?

We ought not impose gender distinctions where they are irrelevant, but that doesn’t mean that society—including public schools—are prohibited from offering activities that recognize gender distinctions. It is ethically legitimate to have women’s book clubs, men’s golf outings, separate bathrooms for men and women, sexually complementary marriage, and father-daughter dances.

I guess the Rhode Island school could have provided a mother-son dance as the reasonably comparable activity for boys, which would have solved the problem of stereotyping. Or better yet, they could have offered a father-son dance, which would have really blown gender stereotypes to smithereens. But why is it inherently better to prohibit all formal recognition that there are differences between males and females than to occasionally recognize that most boys and most girls generally fit within these recognizable gender categories. What sense does it make for homosexual men to say they prefer men over women if there are no gender differences? With regard to dances, generally speaking, more young girls like to get gussied up and go to dances than do  young boys.

Perhaps, however, it wasn’t the promotion of the evil stereotype that girls tend to like dances more than boys do that has the ACLU so incensed. Perhaps the ACLU’s concern is that those who are being raised by single or homosexual parents or who suffer from gender confusion will “feel bad” if there is any activity offered that doesn’t jibe with their circumstances. After all, it is their feelings and beliefs that now control public schools.

This, of course, means public schools are not neutral on the issue of gender confusion, divorce, or families headed by homosexuals. Pretending that little boys are in reality little girls is not a neutral position. Affirming family structures that have only one parent or in which children are raised by homosexuals as equivalent to the traditional family structure in which there is a mother and father is a non-neutral position.

Suffering in Motherless or Fatherless Families

It is tragic that some children don’t have mothers or fathers. The reasons are many ranging from death to divorce and abandonment to the selfish desires of men and women who intentionally create motherless or fatherless children. But the unfortunate circumstances of some children should not preclude society from providing opportunities to celebrate the types of relationships that emerge from sexual differentiation.

The Rhode Island story raises a number of questions:

The fact that a student feels bad when exposed to an idea or activity does not mean that the idea should censored, or that the activity should be prohibited, or that either is wrong. Sometimes our sad (or guilty) feelings are good things. Sometimes they result from recognition that our own ideas and choices or the ideas and choices of people we love are not good. Sometimes our sorrow results from the absence of something good and desirable.

What is the origin of the opposition of gender deconstructionists to gender-related activities? Are they centrally concerned about the sadness children feel because their life circumstances are different from those of their peers? It could be that the ACLU believes that schools shouldn’t play any part—no matter how incidental, remote, or ancillary—in making kids feel bad because of differences in their life circumstances. If that’s the case, then schools must do away with honors nights because some kids can’t garner honors. And swim teams shouldn’t invite parents down on deck on senior night because some children don’t have parents. And health classes shouldn’t teach about the health risks of obesity because some kids have obese parents.

If that’s the case and they win the cultural day, we’re in for a world of hurt. If we think schools are hurting children by holding an after-school, father-daughter dance, imagine a world where little girls and boys are taught that objectively discernible gender doesn’t exist and where all activities that recognize and celebrate gender differences are prohibited.

Father-daughter dances are not merely enjoyable activities for fathers and daughters (or grandpas and granddaughters, uncles and nieces, older brothers and little sisters). They also teach girls how men should treat women. In a small way, they help girls know the experience of being honored and cherished. And maybe in some small way that will help girls later in life reject those men who don’t honor and cherish them—or those who abuse them.

Public schools have no ethical obligation to try to alleviate all suffering, including the suffering that results from the poor choices of adults. Schools can’t lessen the pain that results from missing fathers or mothers. Schools can, however, make it more difficult for children to see the real source of their pain. Schools can also stand in the way of children growing up to aspire to something better. When schools teach implicitly and explicitly that fatherless or motherless families are just as beneficial for the rearing of children as stable families with one mother and one father who are married for life, they make it less likely that children will aspire to such family structures when they grow up.