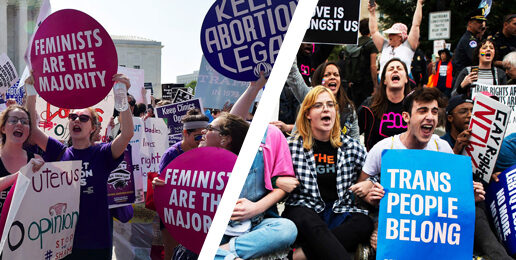 Yes, Abortion and Transgenderism are Two Sides of the Same Coin
10.20.21
PRINT

Recently a transgender activist claimed, “Abortion rights and trans rights are two sides of the same coin.” Jennifer Finney Boylan, a man who identifies as a woman, argued that

In many ways, the decision to terminate a pregnancy is not unlike the decision to go through transition: It is a fundamentally private choice that can be made only by the individual in question — a person who alone knows the truth of their heart, who alone can understand what the consequences of their choices will be in the years to come.

While Boylan is incorrect in how the two movements are two sides of the same coin, it is true that abortion and transgenderism are rooted in the same set of ideas. Both rest on the assumption that one’s “true self” or personhood can be separated from biological realities and both have a distorted understanding of the purpose of medicine.

Just as the abortion movement insists that an unborn child is not a person even though science has proven that life begins at conception, the transgender movement insists that a person’s “true self” can be separate from his or her physical body. In Planned Parenthood v. Casey, Justice Anthony Kennedy infamously stated, “At the heart of liberty is the right to define one’s own concept of existence, of meaning, of the universe, and of the mystery of human life.” In that statement, he captures the mindset that is behind both abortion and transgenderism — the idea that each of us has the “right” to define our own concept of existence.

This so-called “right to define one’s own concept of existence” distorts medical practice in such a way that it is no longer viewed as a means of healing but as a means of forcing, or attempting to force reality to match one’s own desires. This happens in abortion when the reality of an unborn child’s right to life is dismissed in favor of a woman’s “choice.” Instead of doing no harm, abortionists intentionally kill an unborn child while insisting that the child was not truly a person.

Transgender ideology also rejects the “do no harm” principle and replaces it with the notion that whatever the patient believes will lead to personal fulfillment is right, even if it causes direct harm to his or her body. What is “loving” under this view is not what is in the best interest of the patient or what honors their human dignity by caring for their body, but doing whatever the patient feels will give them the most “autonomy” over his or her body. Boylan writes,

The heartbreaking and horrifying irony of this argument is that a writer who is claiming that going through puberty will leave a child “scarred” for the rest of his or her life is literally arguing that children should be given hormone-blockers that prevent their natural development and undergo surgeries that will leave them permanently scarred.

Arguments for “bodily autonomy” as a justification for abortion or transgender surgeries have a very low view of the human body, treating it as a “flesh prison” in the words of some transgender activists, or in the case of abortion, something to be disposed of as medical waste. The truth is our bodies matter and should be treated like they matter. Embodiment is a fundamental part of what it is to be human and we cannot separate our humanness from our embodiment. Because of this, “bodily autonomy” does not make it right to remove or mutilate healthy organs in order to make someone’s body resemble that of the opposite sex. Similarly, “bodily autonomy” is not a justification for taking away the life of another human being, whatever their stage of development, as abortion does.

Far from being about fear or control as Boylan claims, rejecting abortion and the so-called “treatments” offered by the transgender movement is a matter of respecting human life and the human body and living consistently with biological reality. Not only do we not have the right to redefine reality, we do not have the ability to do so. The abortion movement and the transgender movement both deny this and leave destruction in their wake as a result. The two really are two sides of the same coin and in a classic “heads I win, tails you lose” scenario, the “patients” that these movements claim to serve never benefit.