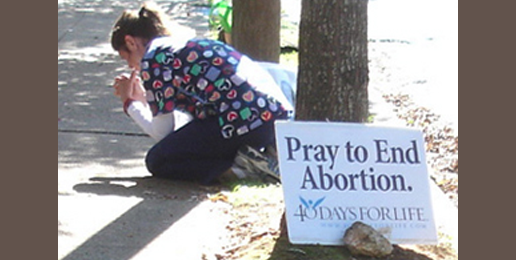 Windows and Fences and Walls, Oh My! Let Us Be Clear about Which Side of the Abortion Divide Is on the Retreat
Written By Terrell Clemmons   |   10.22.19
PRINT

Rae Ellen had been a faithful volunteer with Santa Cruz, California, 40 Days for Life for sixteen campaigns. Confined to a wheelchair, if she couldn’t get a ride, she would take a handicap taxi to the abortion clinic to pray and keep vigil.

One day, she watched as a couple arrived and went inside. She could tell just by watching them through the window that they were ambivalent about their decision. Soon, the boyfriend came outside and asked Rae if he could see her sign. Then he held it up so his girlfriend could see it through the window. He handed it back to Rae and said, “Thank you for being out here,” and soon afterward the couple left without following through with the abortion.

At a different 40 Days for Life campaign on another side of the globe, Edward noticed a flurry of activity near the front door of the London clinic where he was praying. There were police at the door, and several people were shouting and gesturing. He tried to focus on his prayers, rather than gawk at the spectacle, but then he saw another strange disturbance taking place behind one of the front windows. Shawn Carney describes the scene in The Beginning of the End of Abortion: 40 Inspiring Stories of God Changing Hearts and Saving Lives:

At one of the front windows of the facility, a woman was jumping repeatedly, apparently in a frantic effort to get herself high enough to crawl out the open window. Edward stared, unable to look away. Each time, she came a little closer. He turned away to catch the attention of another volunteer, and by the time he looked back, the woman had made it out. …

He watched as the woman sprinted through the parking lot. Edward couldn’t imagine what would happen when she reached the fence – and then he watched her jump that fence and then two more to escape!

Edward later learned that the woman’s name was Julia and that her family had taken her to the clinic against her will. She had told a sidewalk counselor what was happening on the way in, and the counselor in turn had called the police about a case of forced abortion. Once inside, Julia had refused to cooperate, and while the family was distracted with the police, she stole away to the bathroom and made her escape. She later said it was the sight of the people praying outside that had given her courage to fight for her baby.

By now, you’ve probably seen photos of the new Planned Parenthood mega-clinic in Fairview Heights, Illinois — built in stealth across the river from St. Louis, MO. Did you notice this new building’s wrought iron fencing and what looks like mega blockades concealing windows, doors, and even its barriers along the outside walkway? Put some razor wire along the top of that fence, and the compound could pass for a small prison. It’s like they don’t want people on the inside to be able to see what’s happening on the outside. Why might that be?

Shawn Carney told another story in that same book. It was about a history professor he had in college. The professor was rather dispassionate in class, except for one incident:

It was the height of the Iraq war, and our class was discussing global terrorism. It was also the fall of the first-ever 40 Days for Life campaign. In the middle of our class discussion, he abruptly cut the conversation short and said, “If you want to see real terrorism at work, drive by Planned Parenthood and look at the people standing outside praying.”

On the one hand, this came across as comically ironic. Just that morning, Shawn had dropped his new wife Marilisa off at that very clinic to pray. Marilisa … a terrorist?

On the other hand, this gives us a window into the psyche of the abortion-minded. People praying are terrifying. And if the design of the new mega clinic is any indication, preventive measures must be taken to keep patients and clinicians on the inside from seeing those frightening people praying on the outside.

Take courage, pro-life friends. This is an indication that, although abortion is a grave offense against life and the God who created us to live, in the arena of the cultural conflict, abortion in America is on the retreat.