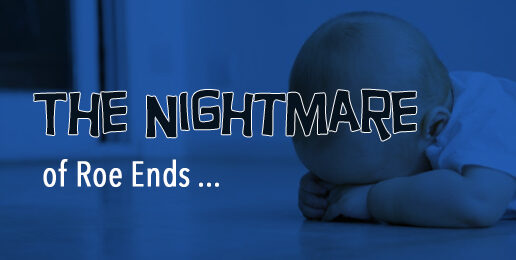 The Nightmare of Roe Ends, But Undoing the Damage Continues
Written By Laurie Higgins   |   06.24.22
PRINT

Today we give thanks to God for the wisdom and courage of U.S Supreme Court Justices Samuel Alito,  Clarence Thomas, Neil Gorsuch, Brett Kavanaugh, and Amy Coney Barrett for holding that the “Constitution does not confer a right to abortion; Roe v. Wade and Planned Parenthood of Southeastern Pennsylvania v. Casey are overruled; [and] the authority to regulate abortion is returned to the people and their elected representatives.”

The syllabus (i.e., summary) in Dobbs v. the Jackson Women’s Health Organization outlines the major arguments addressed by the majority:

Writing for the Court, Justice Alito made mincemeat of the lousy arguments proffered in Roe and Casey, but the political invertebrate Chief Justice John Roberts did what he does best. He tried to swim smack dab down the middle of this roaring river. Hard to do without a spine. The political Roberts voted with the majority but refused to overturn Roe and Casey despite numerous leftist legal scholars acknowledging for decades that Roe lacked any grounding in the U.S. Constitution.

Justice Thomas again renewed his quest to revisit “substantive due process” jurisprudence, which he argues “has harmed our country in many ways,” and, therefore, “we should eliminate it from our jurisprudence at the earliest opportunity.” He shares this view with Justices Antonin Scalia and Hugo Black as well as Robert Bork and many other legal scholars.

The entire practice of using the Due Process Clause to add judicially favored rights to the limitations upon democracy set forth in the Bill of Rights (usually under the rubric of so-called “substantive due process”) is in my view judicial usurpation.

Justice Hugo Black was similarly critical of substantive due process doctrine in Griswold:

[T]here is no provision of the Constitution which either expressly or impliedly vests power in this Court to sit as a supervisory agency over acts of duly constituted legislative bodies and set aside their laws because of the Court’s belief that the legislative policies adopted are unreasonable, unwise, arbitrary, capricious or irrational. The adoption of such a loose, flexible, uncontrolled standard for holding laws unconstitutional, if ever it is finally achieved, will amount to a great unconstitutional shift of power to the courts which I believe and am constrained to say will be bad for the courts and worse for the country. Subjecting federal and state laws to such an unrestrained and unrestrainable judicial control as to the wisdom of legislative enactments would, I fear, jeopardize the separation of governmental powers that the Framers set up and at the same time threaten to take away much of the power of States to govern themselves which the Constitution plainly intended them to have.

Leftists mock Thomas for his substantive critique of substantive due process mischief. They do so because they fear losing the power of the Court to act as a supreme law-making body. Well, they did fear that while they controlled the Court.

But Thomas’ critique is not a fringe critique, and he may have at least one ally on the Court: Justice Neil Gorsuch.

Now, the arduous work of changing hearts and minds that have been corrupted by nearly fifty years of leftist propaganda becomes even more urgent.

We need to donate more money to crisis pregnancy centers, both to help mothers who are considering abortion and to repair damage from domestic terrorists like Jane’s Revenge that promises violence to organizations that seek to protect children in their mothers’ wombs.

We need to pour money into creative, compelling public service/social media campaigns and the arts in order to elicit support for protecting preborn babies.

We need to elect wise, courageous state leaders who stand boldly for the sanctity of lives that pro-abortion activists deem unworthy of life.

We need to pass fiscal and social policies that end—rather than create—poverty, and we need to create a culture that doesn’t think a solution to poverty is baby sacrifice.

And we need to educate our children in places that teach that humans in their mothers’ wombs are sacred and that neither their developmental status, nor their convenience for others, nor their imperfections grant to their mothers the moral right to have them killed.

And we need to pray ceaselessly for the least of these. We must pray that incipient human lives are able to survive the dangerous waters of their mothers’ wombs.