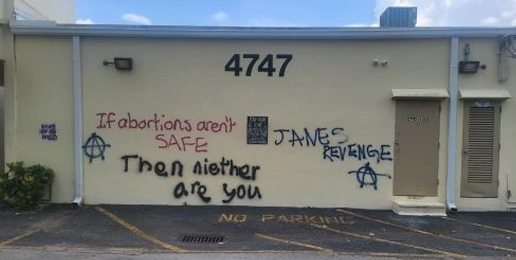 While U.S. House Speaker Nancy Pelosi pretends to be quaking in her Jimmy Choo stilettos about alleged homegrown domestic terrorists, she doesn’t seem to know who they are. Pelosi faux-frets about tragic school shootings and an imagined insurrection, while ignoring the human slaughter she openly supports and the terrorist threats and actions she secretly supports. And she’s not alone on the left, which is why the legacy press and most leftist collaborators remain electively mute as Jane’s Revenge seeks vengeance against any organization that tries to protect the unborn.

Jane’s Revenge, an anonymous anarcho-feminist collective with apparently multiple terrorist cells around the country, has claimed responsibility for the bombing of several crisis pregnancy centers and pro-life organizations and warns via blood-red graffiti that more violence is coming:

If abortions aren’t safe, neither are you.

Abortions were quite safe for women by the 1960s and remain wildly unsafe for tiny humans in the womb today. In fact, abortions are lethal for most—though not all—gestating humans.

In the first communiqué from Jane’s Revenge, titled “NIGHT OF RAGE: AN AUTONOMOUS CALL TO ACTION AGAINST THE PATRIARCHY,” the vengeful urge women to be ferocious in the service of a nonexistent constitutional right to slaughter the unborn:

Why is it that we are so afraid to unleash hell upon those who are destroying us? … Your anger has been stolen from you. To this we say: no more. We need to get angry. We need the state to feel our full wrath. We need to express this madness fully and with ferocity. We need to quit containing ourselves. We need them to be afraid of us.

Last week, an evil creature slaughtered 19 children and two teachers in their classroom in Texas. While some may call this horrific act “senseless” or “random,” we know that’s not the case. We know that this was an act of male domination and patriarchal violence, meant to make women, children and teachers live in fear. We know it is deeply connected to the reproductive violence about to be unleashed on this land by an illegitimate institution founded in white male supremacy.

Say what? The Uvalde shooting is connected to the Supreme Court decision in Dobbs v. Jackson Women’s Health Organization? Allowing states to restrict human slaughter is “reproductive violence“? On what basis do the vengeful Janes make those claims?

(As an aside, I wonder if Ruth Bader Ginsburg thought the Supreme Court is an illegitimate institution.)

Leftists—including women—refuse to arm teachers, refuse to keep criminals in jail, refuse to support the police, refuse to safeguard our borders, and refuse to acknowledge the critical need of children for their fathers. And then the leftist Janes ironically allege the patriarchy (i.e., conservatives) cause harm to children.

Leftists—including women—celebrate the experimental chemical sterilization and surgical mutilation of minor children in the service of an arguable, anti-science, metaphysical superstition and then claim to care about children.

A lone male killer mowed down 19 children, while an army of matriarchal murderesses march in our blood-soaked streets fighting for the legal right of women to mow down close to 900,000 humans in the womb annually.

Leftists shout their voluntary slaughter of their own children and call it “reproductive health care” and freedom.

Jane’s Revenge was named after the Jane Collective (or just Jane), a group of seven young women in Chicago who arranged and sometimes performed illegal abortions in the years 1969-1974, after which their wicked services were no longer needed.

In an HBO documentary titled The Janes, the now elderly Janes claim they were saving women’s lives. What is not mentioned is that, according to the pro-human slaughter Guttmacher Institute, by “1965, the number of deaths due to illegal abortion had fallen to just under 200.” Compare that to the million deaths of human beings in the womb every year since 1973–half of whom are girls and all of whom were denied any choice about being aborted.

The next step is carrying that anger out into the world and expressing it physically. … On the night the final ruling [i.e., Dobbs v. Jackson] is issued … we are asking for courageous hearts to come out after dark. Whoever you are and wherever you are, we are asking for you to do what you can to make your anger known. We have selected a time of 8pm for actions nationwide to begin.

Sounds to me like a call for domestic terrorism—er, I mean mostly peaceful protests.

The second communiqué from the terrorist organization Jane’s Revenge includes a threat directed to crisis pregnancy centers and pro-life organizations: 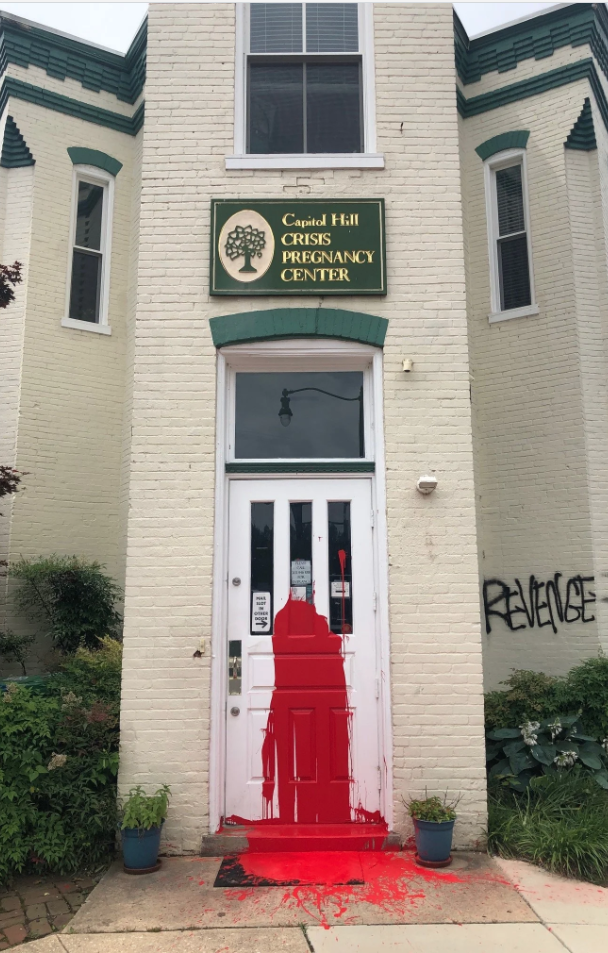 You’ve read the communiqués from the various cells, you’ve seen the proliferating messages in graffiti and elsewhere, and you know that we are serious.

We were unsurprised to see thirty days come and thirty days pass with no sign of consilience or even bare-minimum self-reflection from you who impersonate healthcare providers in order to harm the vulnerable. …

Your thirty days expired yesterday. We offered an honourable way out. You could have walked away. Now the leash is off. And we will make it as hard as possible for your campaign of oppression to continue. We have demonstrated in the past month how easy and fun it is to attack. We are versatile, we are mercurial, and we answer to no one but ourselves. We promised to take increasingly drastic measures against oppressive infrastructures. Rest assured that we will, and those measures may not come in the form of something so easily cleaned up as fire and graffiti. Sometimes you will see what we do, and you will know that it is us. Sometimes you will think you merely are unlucky, because you cannot see the ways which we interfere in your affairs. But your pointless attempts to control others, and make life more difficult, will not be met passively. Eventually your insurance companies, and your financial backers will realize you are a bad investment.

From here forward, any anti-choice group who closes their doors, and stops operating will no longer be a target. But until you do, it’s open season, and we know where your operations are. The infrastructure of the enslavers will not survive. We will never stop, back down, slow down, or retreat.

What was the “honourable way out” that Jane’s Revenge offered pro-life activists? Complete submission to the vengeful Janes’s pernicious will.

Jane’s harpies seem ignorant of the irony in griping about alleged oppression while threatening retaliation if fellow women refuse to sanction the slaughter of the least among us.

Maybe Biden can squeeze in some time between creating Ministries of Truth and spying on wayward parents to investigate Jane’s Revenge who are actually threatening Americans.

Violence in the Name of Jane Roe
b
a
x
r