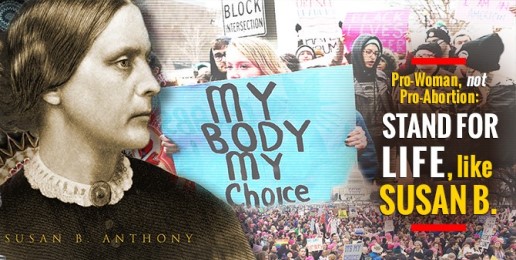 In a recent Saturday Night Live sketch, a group of millennial women visit the historic home of suffragette Susan B. Anthony in Rochester, New York. Devout feminists one and all, they decide before leaving to invoke the ghost of Anthony by saying her name three times. Lo and behold, she appears, played by Kate McKinnon—bun, lace collar, and all.

Hilariously, the modern feminists find Anthony quite boring. She drones on about women’s rights and dignity, while they check their smart phones and argue about dinner. Until finally she says something that wakes them all up: “Abortion is murder!”

Doubtless many modern feminists were taken aback by this Saturday Night slip-up, given the show’s liberal leanings. But as Serrin Foster of Feminists for Life told National Review, all of the “feminist foremothers…without known exception, spoke out against abortion.”

That’s right. The suffragettes—Susan B. Anthony in particular—were fiercely pro-life, calling abortion a “crime against humanity,” “feticide,” and “child murder.” In fact, one of the primary organizations backing pro-life candidates today—the Susan B. Anthony list—does so in her name.

Given how close the unborn were to the hearts of the earliest women’s rights crusaders, it’s troubling to see how unwelcome pro-life women are on the modern feminist stage. We saw this discrimination vividly last week during the nationwide Women’s March.

Muffled but not quite absent were the voices of pro-life women. Several prominent pro-life organizations that applied as partners of the women’s march were either dis-invited or ignored, though several showed up anyway. Even the New York Times, in a surprising and praiseworthy piece, documented the virtual blackout of pro-life messages at the demonstration.

After booting a Texas anti-abortion group, Women’s March co-chairwoman, Linda Sarsour, told the Times, “If you want to come to the march you are coming with the understanding that you respect a woman’s right to choose.”

In other words, pro-lifers not welcome!

“This is what we conservative women live with all the time,” said Charmaine Yoest, senior fellow at American Values: “This idea that somehow we aren’t really women and we just reflect internalized misogyny.”

The Women’s March was, Yoest concluded, a “wholly owned subsidiary of the abortion movement.” And were it not for the unexpected coverage by the Grey Lady, these organizers may have succeeded in drowning out the pro-life message.

But as Bob Dylan sang, the times, they’re a changin’. Just this month, the pro-choice Guttmacher Institute reported that abortions in the United States have fallen to their lowest rate since Roe v. Wade. (Read more here.)

A lot has contributed to this decline, from pro-life legislation and ultrasound availability, to widespread contraception use and the acceptance of unwed motherhood. So the news isn’t all good. But when you consider the growing movement of young people who see the rights of the unborn as a social justice issue, the tired assumption that feminism equals abortion support really begins to falter.

Even pop culture and late night TV are straying from the pro-abortion script. And as Kathryn Jean Lopez wrote in National Review, this may be our chance to reintroduce an older, better women’s movement—one that didn’t pit the rights of mothers against the lives of their unborn children.

This article was originally posted at