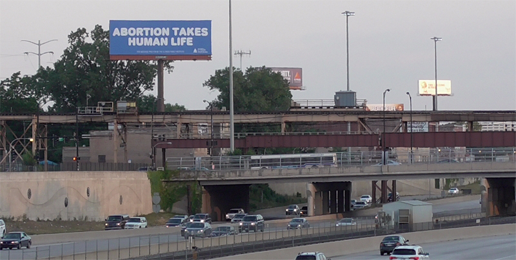 Pro-life Billboard Reaches the South Side of Chicago!
Written By Chris Iverson   |   08.09.17
PRINT

Illinois Family Institute is pleased to announce that we have another large billboard on the south side of Chicago with the message: “Abortion Takes Human Life.”

The billboard is located near at 59th and Wentworth, overlooking the Dan Ryan expressway (I-90/I-94).  It’s located 3 miles south of the White Sox Stadium, Guaranteed Rate Field, and it’s just west of The University of Chicago and the Museum of Science and Industry. The message will be seen 3.86 million times during the month of August, reaching residents all around Chicago’s south side.

This is the fourth billboard with this message in the Chicago area during 2017.  Between February and March of 2017, three billboards reached 12 million viewers with the same message, “Abortion Takes Human Life.”  These were located on three different highways, I-290, I-55, and I-294.    All four billboards are located in Cook County which has a population of 5.2 million. The billboards will reach over 15 million views!

The efforts to reach Chicago area residents with this culture changing message has also taken the form of pro-life overpass events.  During these memorable and sometimes exhilarating events, pro-life friends gather to display this same message on highway overpasses throughout the Chicago area.  It’s during these moments when pro-life advocates have seen the overwhelmingly positive response to this message, with 80 percent of the drivers responding positively and only 20 percent responding negatively.

Donors and volunteers have made it possible to reach millions with this powerful message.  The contributions by the pro-life community are critical if we’re going to save babies and their parents from the life-ending and soul-wounding act of abortion.  The culture can only change if we employ mass communication methods, including clear concise messages on billboards.  More babies will be aborted if we are passive and do nothing.  Therefore, we must act boldly!

Here is a short video taken at the location.  It is narrated by IFI’s Dave Smith.

Donate to the next billboard and let’s reach millions with this politically incorrect, but critically important message:

Are Progressives Targeting Minorities with Abortion?
b
a
x
r