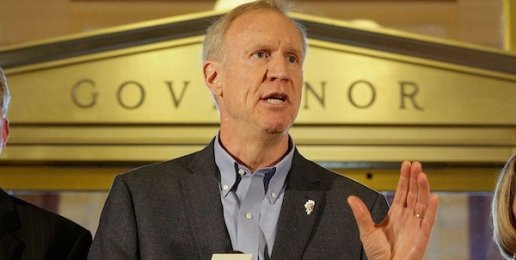 Despite playing coy in a few private meetings during his campaign in 2014, Bruce Rauner turned out to support pro-abortion, pro-LGBT and pro-cultural rot. So his announcement last week that he would veto legislation that would authorize taxpayer funding of abortion – HB 40, should it reach his desk, took many by surprise.

According to Illinois Citizens for Life (ICL), HB 40 removes all prohibitions on using tax dollars to pay for abortions throughout the full nine months of pregnancy under Medicaid and for any reason:

If this bill passed into law, an estimated 15,000 abortions or more each year would be paid for with state taxpayer dollars, since the federal government prohibits paying for abortions other than for life, rape and incest.

This bill has been one of the chief targets of Illinois Family Institute during this spring’s General Assembly session.

According to an article in the Washington, D.C. -based political magazine Politico:

About 20 Republican lawmakers sat down with Rauner in recent weeks to deliver a message on the abortion legislation: if you want us to support you in your quest for reelection, veto HB 40. The meeting came at the urging of social conservatives who wanted a discussion with the governor about his intentions.

“[S]ocial conservatives have not asked for much,” state Senator Kyle McCarter (R-Lebonon) said. “We tolerated a lot and this is one thing that we do expect in order to support the governor in the next election.”

Illinois Citizens for Life reports “survey after survey has shown that a clear majority of Illinoisans, even those who say they are pro-choice, do not want their tax dollars paying for abortions.”

Take ACTION:  Pro-life supporters should let the governor know that they appreciate this decision.

CLICK HERE to send a message to Gov. Rauner letting him know that the pro-life, pro-family community welcomes this announcement.

Unsustainable: Raising Taxes Solves Nothing, Makes Illinois Worse Off
b
a
x
r