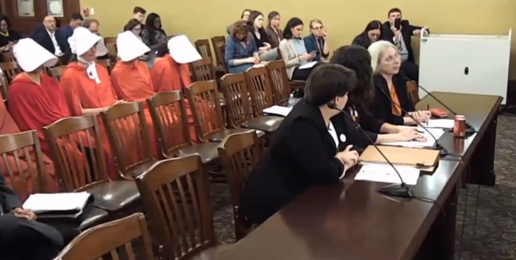 As you may know, our state lawmakers returned to the Capitol late Sunday afternoon to begin their last week of regular session, which is scheduled to end on Friday, May 31st. At 6:08 PM, SB 25 (House Amendment 1) was posted and then scheduled for a hearing at 7:08 PM. This proposal, sponsored by State Representative Kelly Cassidy (D-Chicago) is very similar to the extreme abortion expansion legislation filed by her earlier this year.

It should be noted that this bill was posted and scheduled in the absolute minimum amount of time required to be considered in the Illinois General Assembly and done on a Sunday night in the middle of Memorial Day weekend. Proponents were somehow prepared, however, with legal and medical witnesses to testify and a small group of melodramatic activists wearing handmaid costumes (see picture above) to boot.

For approximately two hours, the committee heard testimony from proponents and opponents, and the sponsor fielded questions from members of the committee. Unfortunately, Committee Chairperson Robyn Gabel (D-Evanston), cut questions short. To this point, State Representative Avery Bourne (R-Litchfield), strenuously complained that she had many more questions to ask about the legislation and pointed out that the committee process was the right place to do it. Yet, questions and answers were severely truncated.

You can watch the entire hearing on the IFI YouTube channel.

In the end, SB 25 was passed out of committee by a vote of 12-7 along party lines. It now moves to the Illinois House floor where it is already on 3rd reading (conveniently teed up) and could be called for a vote of the full Illinois House today or anytime this week.

PRAY: If you believe, as we do at IFI, that our “struggle is not against flesh and blood, but against the rulers, against the powers, against the world forces of this darkness, against the spiritual forces of wickedness in the heavenly places,” then you recognize the centrality and indispensability of prayer in circumstances like this. Without a doubt, this is a spiritual battle and well beyond our human control. Frankly, given the makeup of the General Assembly, it looks impossible to stop this bill. But since we serve a God who specializes in doing the impossible, our prayers and petitions must flood His throne room with appeals for our pre-born neighbors throughout this week:

Pray that proponents of this destructive legislation would not be able garner the 60 votes needed to pass from the Illinois House to the Illinois Senate.

Pray that lawmakers on both sides of the aisle and in both chambers would be troubled by the scope of this legislation.

Pray that lawmakers would understand that pre-born babies, just like their own children and grandchildren, are “fearfully and wonderfully made” in the image of God. Human beings are His crown jewel of creation as they are made in the image and likeness of God.

Pray that lawmakers would recognize that abortion extinguishes a human life with great potential.

Pray for Almighty God’s intervention in this situation in Springfield. Pray Psalm 108:12-13.

Take ACTION: If you are able to fast and pray today, please join me in doing so, yet we cannot stop there. We still must act by calling our state representative today to urge him/her to reject SB 25, the grotesquely misnamed “Reproductive Health Act.” Click HERE to find their contact information. Your state senator and state rep. are the last two on the page. Please call today! The Capitol switchboard number is (217) 782-2000.

You can also call Illinois House Speaker Michael Madigan (D-Chicago) and respectfully appeal to his staff not to expand abortion or repeal parental notification through the passage of SB 25. Please call his Springfield office at (217) 782-5350.

You can (and should) also send an email your state lawmakers:

More ACTION:  Click HERE to send a message to your state senator, state representative and to Gov. JB Pritzker. Urge them to stop targeting innocent pre-born children and vulnerable women in Illinois. Ask them to vote against the grotesquely misnamed “Reproductive Health Act.”

P.S. We continue to watch for final action on other bills (among others): “recreational” marijuana (SB 7), the anti-IFI resolution (HJR 55), gambling expansion (HB 1260, HB 3308, and SB 516), and a plethora of other tax and fee increases. Pray that these bills fall short of the votes they need to pass.