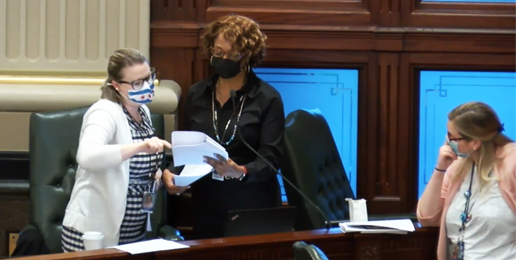 Don’t let the word “debate” in the term “floor debate” fool you. Floor debates in Springfield are no more debates than transwomen are women. There is no cross-examination or rebuttal, for which most of our lawmakers must be deeply thankful in that they couldn’t argue their way out of an imaginary paper bag—at least not using logic and evidence.

Floor debates in Springfield are occasions for bill sponsors and supporters—almost always Democrats—to pontificate and for opponents to try to point out flaws that are promptly ignored by Democrats no matter how reasonable and justified. A floor debate in Springfield for Democrat-sponsored bills is a tale told by idiots, full of sound and fury, signifying nothing but more government restriction of liberty, more government spending, and more moral chaos.

For an example, let’s look briefly at last Friday’s floor debate preceding the vote in the Illinois House on the pernicious sex ed bill that now awaits Governor J.B. Pritzker’s signature. According to the bill’s chief sponsor, State Representative Camille Lilly (D-Chicago), the bill was socially constructed by three far left organizations—”Advocates for Youth, SIECUS and the Answer”—all of which are dedicated to normalizing abortion, early sexual experimentation, and sexual deviance. It is noteworthy that this bill is so perverse and troubling that even Illinois Democrats were barely able to scrape together the 60 votes needed to pass it.

Before looking at the “debate,” here’s a reminder of what lawmakers in Springfield think government employees should be exposing other people’s children to.

If signed into law, this bill will require all personal health and safety lessons in Illinois public schools—including charter schools—to teach children in grades K-2 about unmarried moms and dads and families led by homosexual couples. These very young children will also be expected to define “gender identity’’—a euphemism for the disordered desire to be the opposite sex.

To ensure that religious Illinois school children graduate from high school ashamed of and detesting the faith of their mothers and fathers, government employees will teach them about the evils of what leftists call “homophobia” and “transphobia.” In the Upside Down where leftists live and move and have their being, the true belief that homosexual acts and cross-dressing undermine the image of God imprinted on all humans constitutes irrational hatred.

State Representative Avery Bourne (R-Raymond) was able to get Lilly to admit that this law—like the ever-shifting moral beliefs of leftists—is fluid. If the bill becomes law, it will forever be tied to the National Sex Education Standards which change as progressivism affirms additional forms of sexual perversion. Bourne’s question elicited this shocking confession from the hapless Lilly:

As the National Sex Education Standards are updated, the State Board of Education shall update these learning standards.

All the ideas related to sexuality just mentioned are socially constructed leftist terms embedded with leftist assumptions. All the terms tossed about with absolutist certainty by Democrats to justify the indoctrination of other people’s children, including “age-appropriate,” “developmentally appropriate,” and “culturally appropriate,” are defined by leftists using criteria established by leftists.

Virtually no theologically orthodox Christian believes it is “culturally appropriate” for their 5-8- year-olds to be taught anything about homosexuality or “trans”-cultic beliefs and practices. SB 818’s supporters like to emphasize the sop they’re tossing to conservatives: Any parent may opt their child out of perversion-positive training.

Doesn’t sound very inclusive to me. In addition, conservatives still have to pay for perversion-positive “personal health and safety” training.

I know because these “standards” do not require schools to teach about, for example, polyamory, zoophilia, or infantilism—all forms of “identity” for some people. Even though these are forms of identity, Springfield Democrats don’t—yet –require that Illinois schools affirm them. The reason is that not enough Democrats—yet—believe these forms of identity are moral. Currently, Democrats believe homosexual and cross-sex identities should be normalized via taxpayer-funded schools because Democrats have concluded they are morally acceptable.

Remember what this bill requires as I quote some of the dumb things Democrats said about it in their fatuous floor speechifying, starting with the foolish sponsor of the bill, Camille Lilly:

Under SB818 … the materials and instruction must be age and developmentally appropriate, medically accurate, correct, complete, culturally appropriate, inclusive. … SB818 is not a mandate. Under SB818 parents, guardians and others will still be able to review the materials used by schools. Parents are still able to opt out, and local control applies to the selection of courses and materials and the curriculum. In addition to reducing stigma, SB818 would result in creating and the creation of learning standards that reflect the diversity of all students here in the state of Illinois.

Some brief thoughts about Lilly’s claims:

State Representative Delia Ramirez (D-Chicago) asked Lilly if it were true that the Illinois State Board of Education and the Illinois Association of School Boards are “neutral on the bill,” to which Lilly responded “Yes.” Then in an amusing and obvious manipulation of rhetoric, Ramirez changed the word “neutral,” saying, “So, educators don’t oppose the bill.” Well, it’s equally correct to say, “So, educators don’t support the bill.”

And we should ask if they think there should be a law prohibiting all teaching on personal health and safety unless it includes those topics. No discussions of healthy eating permitted unless they’re accompanied by affirming discussions of cross-dressing, hormone-blocking, and self-pleasuring.

We view television shows on TLC like Hoarders, My 600-Pound Life, just for example, where they often recall their childhood experience with shame, emptiness, guilt, confusion from their dealings with that word: sex. This legislation’s primary focus is not about the birds and the bees. It’s about equipping our children with age-appropriate conversations about how they can be empowered within themselves.

Well, West is right on one thing: This bill is definitely not about the birds and the bees.

Maybe, just maybe, it’s not the job of education majors to sexually “empower” other people’s children with the pagan sexual beliefs of regressives.

Two questions for West and all leftists:

1.) Since when did it become the task, pedagogical obligation, or right of public school teachers to solve all societal ills?

2.) Are there any pedagogical, ethical, moral, emotional, or psychological problems potentially created by introducing sexual imagery, ideas, and beliefs to other people’s children who have never been abused or shamed and whose parents have successfully protected them from ideas they—the parents—believe are age-, developmentally, culturally, and morally inappropriate?

In case parents don’t yet realize it, this newest bill is centrally about normalizing homosexuality and “trans”-cultic beliefs and practices. In yet another statement made with a voice quivering with faux-emotion, lesbian activist with a burnt soul, State Representative Kelly Cassidy, made that clear:

For far too long, LGBTQ youth were either invisible or expressly stigmatized. And I remember that. It burned into my soul. …  I remember that. … And as a kid who didn’t understand why I didn’t fit in, who couldn’t define why I felt different, and whose parents were not an option to go to, I wish I had had a teacher I could turn to. I wish I had had a curriculum that didn’t call me unnatural.

The presumptuous Cassidy demands that public schools affirm her arguable belief that homosexuality is natural, and if parents disagree, Cassidy wants the state to come in between them and their children.

[I]t’s hard to imagine why anyone would think our children should not learn about sex education in school, but rather should refer to the internet or Google to determine what sex is or what their questions are and get them answered there. Right now, if you Google any of these terms related to sex education, you’re going to get a lot more explicit information than anything would be provided in a curriculum.

Phew. I guess Illinois parents should thank Democrats. At least curricula aligned with leftist standards won’t be as bad as what kids can find on the Internet.

It’s unfortunate that Williams suffers from such a dearth of imagination. It’s true, many people don’t think children should learn about sex in public schools. Here’s something else that may surprise the unimaginative Williams. Many people don’t think children should be learning about sex in co-ed classes in public schools. They believe that talking about menstruation and nocturnal emissions in co-ed classes can be embarrassing, inhibit discussions, and undermine the virtue of modesty.

Poor Williams suffers too from an inability to reason logically. Suggesting that there exists only the choice between public schools and the Internet is a classic example of the fallacy of the false dilemma. In addition to leftist-controlled public schools and the Internet, there are parents, grandparents, churches, libraries, and bookstores that can and do educate children on sex. It is not the business of the government to step in and expose all children to assumption-riddled claims about sexuality because some parents are derelict in their responsibilities.

Here’s a modest proposal: Rather than devouring the hearts and minds of other people’s little ones, how about schools offer two classes in personal health and safety—a perversion-positive class and a truly age-appropriate class. The class descriptions should include all materials used, the name of all organizations that constructed the materials, all the standards employed by those organizations, and all the criteria used to determine what constitutes age-, developmental, and cultural appropriateness. Let parents opt-in to whichever class they want or none at all. And allow teachers to choose which class they want to teach. With their deep commitments to diversity, inclusivity, cultural sensitivity, and choice, leftists should love this modest proposal.

Take ACTION: Click HERE to send a message to Gov. Pritzker’s administrative staff to urge him to VETO SB 818 as a terrible overreach of government. Impressionable students in public schools should not be exposed to body- and soul-destroying messages that promote leftist beliefs about sexuality.