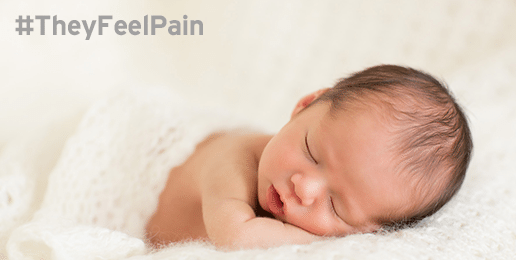 U.S. Representatives Trent Franks (R-AZ) and Marsha Blackburn (R-TN) have reintroduced the “Pain-Capable Unborn Child Protection Act,” an earlier version of which passed the U.S. House of Representatives in the summer of 2013 but was stalled in the Harry Reid-controlled U.S. Senate. If passed, this bill would prohibit abortions performed past 20 weeks, the point at which some research suggests babies can feel pain.

This is an unconstitutional ban, and this is something we expect to defeat….The people of this country believe Congress should be focused on making people’s lives better, and they shouldn’t be involved in making personal medical decisions for women and their doctors.

First, let’s not forget that the U.S. Supreme Court has on occasion erred in its decisions regarding the constitutionality of laws.

Second, increasing numbers of “people in this country” believe that “making people’s lives better” necessarily involves preventing innocent people from being murdered, including those who are guilty of nothing other than being unwanted by their mothers. In fact, according to a Huffington Post poll, 59 percent of Americans  support laws banning abortion after 20 weeks.

Third, the decision to kill a preborn baby is rarely a “medical” decision. When the life of the mother is not in jeopardy, the decision is first and foremost a moral decision.

What is most troubling is the pathological commitment of “progressives” to preserving the legal right of women to exterminate their own babies. The regressiveness of their commitment to barbarism becomes increasingly evident when they defend it.

Huffington Post links to a New York Times article in which experts conclude that the science regarding when preborn babies are capable of feeling pain is inconclusive. How can Cecile Richards and other pro-abortion dogmatists oppose this bill if there’s even a possibility of a baby feeling pain—perhaps excruciating pain—during an abortion? Civilized people would err on the side of compassionate caution. Remember, “progressives” are the same people who believe that waterboarding terrorists or testing cancer drugs on mice is a moral bridge too far.

When “progressives” wax indignant about the ethical outrage of waterboarding, let’s remember that all Special Operations Units volunteer and journalist Christopher Hitchens volunteered to be waterboarded. When was the last time you heard of anyone volunteering to have their skin chemically burned off or be dismembered as can happen in late-term abortions? This is not a defense of waterboarding. It’s an attempt to point out the Left’s inconsistent moral reasoning. If waterboarding is torture, abortion most assuredly is.

In a concession to the possibility that preborn babies feel pain as their skin is burned off or their bodies dismembered, some doctors, including Dr. Kanwaljeet Anand whose research is often cited by supporters of this bill, recommend administering a heart-stopping poison medication as the solution to the problem of a preborn baby feeling pain:

“In the very few abortions where fetal pain could possibly occur…consider what can be done to avoid inflicting a lot of pain on the fetus.” [Dr. Anand] said a common method used after 20 weeks—injecting amniotic fluid or fetuses with heart-stopping medication before removing the fetus— “would be fine, really, from a point of view of fetal pain,” a “compassionate way to do it.”

At this point, regressive absurdists really get themselves trapped in an ethical sticky wicket. They’re recommending pain management in the service of killing an innocent human being. Barbarism is redefined as “compassion.”

Not to worry—absurdists assure the morally sane among us—even if preborn babies feel pain after 20 weeks, only a relatively few are being exterminated that far along. According to the liberal, pro-abortion Guttmacher Institute , in 2011 there were 1.06 million abortions, 1.2  percent of which were performed after 20 weeks. For the math-challenged among us, that means last year 12,720 preborn babies were killed in utero after 20 weeks. It’s important to note, that many in the pro-life movement believe post-20-week abortions are underreported, so 12, 720 may be an inaccurately low figure.

Let’s see, how many terrorists were waterboarded? Oh, yes, three. Let’s even count each number of times each terrorist was waterboarded. With Khalid Sheikh Mohammed being waterboarded 183 times, let’s round it out to 200 times radical Islamists have been waterboarded as compared to 12,720 preborn late-term babies wiped out.

Those who oppose this law make the silly suggestion that conservatives have a secret ulterior motive for this law. The Left suggests the real motive is to limit abortion. That must be the worst kept secret in America.

The second reason is that no ethical, compassionate, civilized society permits torture in the service of killing innocent humans—especially children.

And the third reason is that no ethical, compassionate, civilized society would permit any means of killing innocent girls and boys that may even potentially torture them before it kills them—even if it’s a mere 12,720 children annually.

Last time I heard, the product of conception between two humans is a new human with its own unique genetic code. A compassionate and just society doesn’t condone the killing of  humans based on their location (e.g., in utero), their dependency-status, their physical or cognitive abilities, or the feelings other humans have about their existence.

Take ACTION:  Click HERE to send a message to your U.S. Representative asking them to support H.R. 36, the Pain-Capable Unborn Child Protection Act.

You can also call the Capitol Switchboard to ask to be connected to your U.S. Representative’s office at (202) 224-3121.

If you live outside of Illinois, Click HERE to send an email through the National Right To Life Committee’s web site.