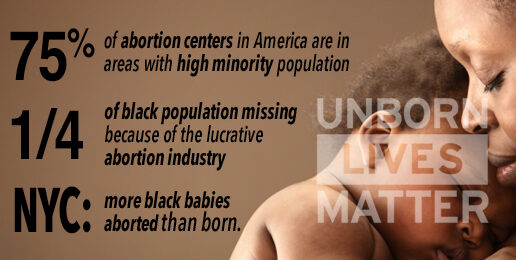 Planned Parenthood has been called out by the National Black Pro-Life Coalition for “systemic racism” and targeting pregnant Black women in a racial discrimination claim filed against the organization.

According to Catherine Davis, president of the Georgia-based Restoration Project, “Systemic racism and abortion intersect at the door of Planned Parenthood, an organization that has targeted Black women and their babies for almost five decades. These intentional actions violate the Civil Rights Act of 1964 which made it illegal for recipients of federal assistance to discriminate on the basis of race.”

In a claim filed in early October with Office of Civil Rights (OCR), U.S. Department of Health & Human Services, the Coalition contends the discrimination has been taking place for close to half a century. The amount of federal assistance Planned Parenthood’s received over that time is no small sum. In the 2018-2019 fiscal year alone, it received $616.8 million in government revenue per its most recent report. The majority of assistance is said to cover Medicaid reimbursements for contraceptives and preventative services to low income and disadvantaged women.

The Coalition, a network of Pro-Life and Pro-Family organizations that embrace the biblical model, wants the federal government to “investigate and hold Planned Parenthood accountable for their continuing violations of civil rights laws as their services have had a tremendously negative and lasting impact on Black women and children–and overall, the Black family.” Several studies appear to back up the Coalitions claims. A study by the Guttmacher Institute found as many as 37% of abortions are obtained by Black women. In addition, a 2015 study found “nearly 80% of the organization’s surgical abortion facilities are located within walking distance of minority neighborhoods.”

In July, the American Conservative reported, one third of abortions in the U.S. “happen to black babies, despite the fact that black women comprise less than 15% of our population. Indeed, the rate of growth in black communities is slower than among most other major U.S. race and ethnic groups.”

The consequences of this were borne out in a statement released by the Coalition from Walter Hoye, founder of the Issues4Life Foundation. “Abortion has been grown into the leading cause of death for Blacks resulting in a fertility rate (1.8) that is less than the required number (2.1) to replace the population,” Hoye said. “At this rate, by 2050 the total Black fertility rate will be 1.3 or lower, a rate that is irreversible.”

For anyone who doubts Planned Parenthood’s ultimate agenda the Coalition makes it clear. According to its media release, “The 2008 FORM 990, PART III, LINE 1, filed by Planned Parenthood, they described their mission in these terms: to achieve ‘…a U.S. population of stable size in an optimum environment.’” It also noted a tweet from former Planned Parenthood President Cecile Richards, proclaiming abortion is as “vital to their mission as birth control or cancer screenings.” The statements are faithful to the organization’s roots.

Planned Parenthood was founded in 1916 in New York by Margaret Sanger who was open about her plans for population control, primarily among those she deemed “unfit.” Now rarely discussed, Sanger’s “Negro Project” was a plan to control the Black birth rate. “To this day, by executing the agenda of their white supremacist founder, Planned Parenthood has developed what I consider to be a method of womb lynching,” said Johnny Hunter, of the Coalition member’s Founder of the Life Education and Resource Network. “That lynching has resulted in the termination of more than twenty million Black lives.”

Stephen Broden of Protect Life and Marriage Texas calls abortion “a brutal form of population control.” He shared, “Abortion has and continues to be a devastating and permanent blow to the Black community. Our children in the womb are decimated. Women are scarred mentally, emotionally and physically–its malicious application disintegrates our families.”

Members of the Coalition appear to view the claim against Planned Parenthood as an extension of the fight for civil rights and social justice. “As my Uncle Dr. Martin Luther King Jr. reminded the nation in 1963, ‘Injustice anywhere is a threat to justice everywhere,’” shared Evangelist Alveda C. King, Director of Civil Rights for the Unborn. “It is my prayer that the arc of the universe will now impact HHS, igniting justice for our children in the womb. Now is the time!”

In 2018 (the most recent year reports are available), there were 42,441 abortions committed in the state of Illinois, 15,278 of which were on Black women, according to the Illinois Department of Public Health.