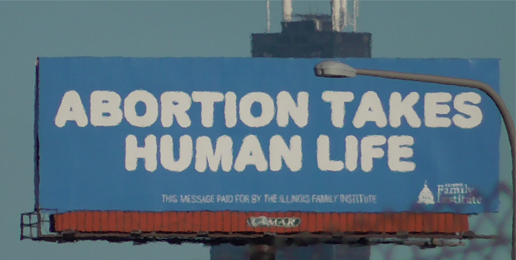 Thanks to your contributions, IFI has put up an eye-catching, pro-life billboard around I-90 and Kedzie Ave, near the Logan Square and Avondale neighborhoods of Chicago.  The message – “Abortion Takes Human Life” — will be seen over 10 million times before the end of July!

This new display comes after IFI and pro-life activists reached half of the adult residents in Cook County during 2016 and 2017 with billboards, pro-life bridge events, and other mass communication efforts.  Our current message will be seen by people traveling to work and school, between O’Hare and Chicago, and to the Taste of Chicago and July 4th events.

The billboard coincides with the inaugural National Pro-Life Bridges Day.  This national event, led by the Pro-Life Action League, will take place on Friday, June 22.  Pro-life advocates will display the message – “Abortion takes a human life” – on bridges over highways all across the country, including three locations in the Chicagoland area.  Learn more about the event HERE.

Pray for our billboard message to encourage the pro-life community, persuade the undecided, and prompt pro-choice people to have softened hearts that they might intelligently consider the moral implications of the scientific truth we are sharing.

Also, please consider contributing to this campaign and the next billboard here:

Pro-life Billboard Reaches Chicago and Suburbs!
b
a
x
r