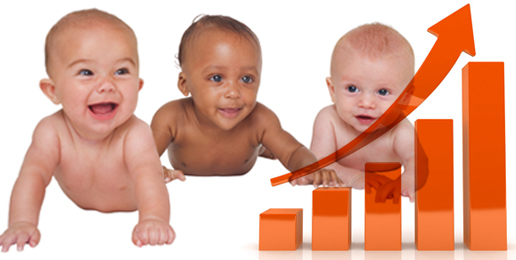 The article Our Failing Demographics showed that the Western world, including the United States, has a persistently low birthrate. Our nations aren’t having enough children, resulting in an aging and ultimately shrinking population. In the United States this will likely lead to:

The obvious answer is to increase the birthrate, to encourage more marriages and larger families. But people are already acting in what they believe is their own self-interest. By and large they’ve got to where they want to be, which happens to provide insufficient children for our future.

The birthrate problem is structural

The referenced article suggests causes for the creation and acceptance of a low national birthrate:

These behaviors and attitudes are responses to beliefs and policies well entrenched into our society. Change these behavior drivers and the birthrate problem could easily be resolved.

If implemented, the following suggestions would give support to young people considering marriage and starting families. The actions and policies would encourage favorable attitudes towards larger families and create a lot of decent jobs.

For two generations our youth have heard the drumbeat of “a small family is best.” [i] Even though we know our problem is not overpopulation, but rather underpopulation, this propaganda still goes on. [ii] How do we reach our youth to overcome the “small family” mantra, educating them that having larger families is desirable?

Educate towards the goal of larger families. The obvious place to start is to begin promoting this idea. Find opportunities talk about the declining birthrate and the danger therein. Explain that America is not choking on too many people. We need many more families and more children.

Don’t be discouraged by naysayers. By extolling larger families you’re cutting into their game. Keep on chatting it up, working to convince people. Our side wins by encouraging families, seeing that more and more children are born. Their side is going to become extinct. By thriving we win game, set, and match.

Endorse that an ideal family should have a father, a mother, and children. This seems so obvious that it doesn’t need mentioning. In reality it is at the center of today’s politics.

Much of America is enamored with socialist ideas. These are the sources of “class warfare,” [iii] and how “children belong to the community.” [iv] In the socialist victory scenario both marriage and families are abolished. [v]

Destroying marriage and the family also completes the low birthrate demographic disaster. When you take away a mother’s children, to have them raised by some government department, you’ll be hard pressed to get more children out of her. Abolishing marriage just doesn’t work. Even Soviet Russia gave up on that idea. [vi] But the allure of regulating or replacing families is still out there in liberal circles. [vii]

For the survival of American society, and the future of our own children, we need to speak against those who degrade of the concept of marriage. Each of us can help by countering this nonsense whenever we hear it. Present your arguments in your own words, in your own way. After all, “he who defines the terms controls the argument.” [viii]

One reason people delay their family plans, or even abandon them, is lack of money. It’s hard to think about marriage and the future when you’re still living in your parents’ basement. [ix] This hindrance to starting families can be overcome through increasing the quantity of good manufacturing jobs, like those currently being exported to foreign factories.

We must create a lot of manufacturing jobs, the kind you don’t need a college education for. Increased high-income employment won’t come from service jobs in the “New Economy.” [x] There just aren’t enough good service jobs to go around.

In general, manufacturing jobs don’t require college degrees. You just show up and work hard. With these jobs our youth can start careers right out of high school. They avoid college debt and can entertain thoughts of family whenever they please. Demographically this is a big win.

Reduce manufacturing costs here. Reducing these costs means a combination of working for less, working smarter, and having fewer hindrances in creating products. Yes, this sounds a lot like what goes on when a factory moves to a new location with a non-union workforce. But these new jobs are needed everywhere, including returning to the cities of the “Rust Belt.” To go back there the situation – location, workforce, etc. – will have be attractively competitive with other possible sites.

Of course we can’t reduce our manufacturing costs to that of Asian nations. We wouldn’t put up with that low a living standard. We’d also have to put up with their level of environmental standards and workplace safety. Besides, if the wages of the American workforce were reduced to that of foreign workers then where would be the demand for all of the goods their jobs would produce?

Raise manufacturing costs there. One reason that foreign factories produce goods more cheaply than we can is because their costs are lower. Their workers are paid less. In many cases their workers are also treated worse. Their towns have terrible environmental issues. [xi] And their factories have management or workplace safety issues that would be unacceptable in an American plant. [xii] If those issues were addressed then these foreign workers would be better off. More to our point, the competitive “playing field” would level out.

We can’t enforce American labor law or standards onto foreign countries. But we can create and enforce rules banning imports from polluting factories or from those with bad workplace standards. Those factory owners are preying on their own employees and on the American marketplace. We already ban subpar goods, like those containing lead paint. Restricting imports for cause isn’t really a new idea.

Restrict imports by quantity and tariffs. We can protect domestic industries through tariffs, or by limiting the quantity of imported goods. America has always used tariffs to control trade and still does so today. [xiii] There are also many industries of strategic importance, so vital that we only buy domestically. For example, who would outsource atomic bomb design to an Indonesian factory?

For demographic reasons it is strategically important to have a lot of good American manufacturing jobs. Our government needs to develop and implement a policy to bring those jobs home.

As a nation we want our youth to consider planning larger families than before. We will develop good jobs for them, ones that don’t require family-delaying years at college. How awful, then, if our own government thwarts these gains through waste and experimentation!

With a minimalist government – providing protection against foreign invaders, deterring criminals and hosting courts to resolve disputes – there is little to complain about. [xiv] But we’ve politicians with minds and plans to reshape the world. [xv] These plans get expensive, as anyone paying for health care reform knows.

But worse than high taxes is a government doing social experiments. For example, if we come to believe that the government will guarantee that all our needs will be met then we will neglect providing for ourselves. In the Life of Julia, government propaganda meant to sell Obamacare, this Julia turns to the government at every point of her life. [xvi] She becomes a permanent child of the parental government.

A nation that accepts cradle-to-grave socialism [xvii] has lost its drive, ambition, and future orientation. We end up saying “Why slave away for the future? Uncle Sam will provide!” That is lazy, shortsighted, and blind to the surprises future years have always delivered.

We need to accept our own responsibilities, each family striving to provide for its own future. [xviii] Only with such diligence, and by God’s grace, can we create provision for our own old age, our childrens’ success, and helping our neighbors in their need.

We need a government that enables this work ethic and rejects overarching big government. We must insist on candidates and officials who promise less, so you can get on with your own futures.

The United States has a problem of low birthrate. This came about through a combination of political policy and educational advocacy. Recovery to a normal, above-replacement birthrate will require deliberate, targeted policies and decisions. The attitude and policy changes suggested here can help fix things.

We must start changing things as soon as possible. The longer we wait the larger the problem will become.