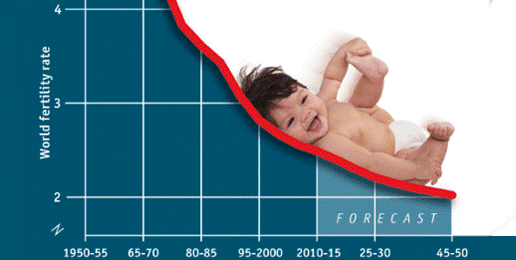 In an exhibition gallery, somewhere …

Welcome to our display of demographic failures! Here you will see amazing things, from both near and far. Behind this first curtain we have … Japan! It’s a nice place but the locals don’t seem to like it much. You see, their families aren’t having many children. As their birth rate is only at two-thirds of the needed replacement rate, experts see Japan’s population dropping by a third within 50 years.[i] Even now, parts of the Japanese countryside have been abandoned, left to return to the wild.[ii]

Moving to our second curtain we see … Europe and Russia. Birth rates in the whole region are alarmingly low. In Spain, with 1.2 children per woman, and Italy, with 1.4 children per woman,[iii] the decline is dramatic. Their populations are expected to go down by a fourth in 50 years. Researchers say that there is hope of easing their population woes through immigration.[iv] However, immigration can have unwelcome side effects.

Coming to our third curtain we have … a mirror? Yes, the United States also has a population problem. Our national birth rate is down to 1.8 children per woman.[v] As with Europe, immigration is hiding the decline.

The developed world, including the United States, has a shortage of children.

A Problem of Too Few Children

The birth rate of American families has been declining since the 1970s. Recently it decreased below the population replacement rate of 2.1 children per woman (slightly more than 2.0 to account for childhood deaths).[vi] A four decade decline is a trend, not an accident. Perhaps these causes have combined to make it so.

For these reasons and others, the United States, like many countries, has a problem with declining birthrate. As this continues it has varied and surprising effects.

Some advocate immigration as a fix for a nation’s declining population.[ix] An influx of new blood could simultaneously increase population and raise the birthrate. Problem solved, right?

This solution might create its own problems. The hoped-for immigrants would likely be coming from another culture. How will they assimilate into the culture of their new home?

There’s no guarantee that immigration will fix the ills of a country with a declining birthrate.

Back to the Bible

The United States has a declining birthrate. What does the Bible say about birthrates?

First, we’re told to “be fruitful and multiply.”[xi] We’ve already done a fair job at multiplying. This commandment can also be construed to read “don’t go and die off.”

Second, we’re to be stewards of the Earth.[xii] That can easily be restated as keeping the Earth in good shape for living in, both for us and our successors. The two commandments are complementary.

How are we doing with this stewardship? Have we hit peak population? Are we living on the last resources of the planet?

There are enough resources for the population we have and for the future.

Third, God wants us to think of the future, the long haul. He’s promised to meet our needs.[xiii] We’re told that when the Master returns he expects us to be doing the tasks he gave us.[xiv]

Fourth, children are a blessing.[xv] Raising them provides a purpose for life and direction for organizing a society. They’re also part of God’s supplying for our needs in old age.[xvi]

Fifth, children are an expression of hope for the future. Creating a family is commitment to care for them and to shape the world for their benefit. You prepare and teach them to go and do the same with their own children. As a society you plan on staying around for a long time.[xvii] You believe in God to provide for you and yours.

From this we conclude that God doesn’t want our nation to go “out of business” for lack of children. Having children is an act of faith in God’s provision, and his reward for our being faithful to Him.

Developed industrial nations seem to be historically nearsighted. Their peoples are too busy, perhaps too selfish to bother replacing themselves. People without children have a limited stake in the future.

Christians shouldn’t have that mindset. A godly family is a form of evangelism. Having more children in an ungodly society is a means of conquering it.[xviii] Your children are a stake in Americas’ future, your own future, and a comfort for your old age. How large a legacy do you wish to create?