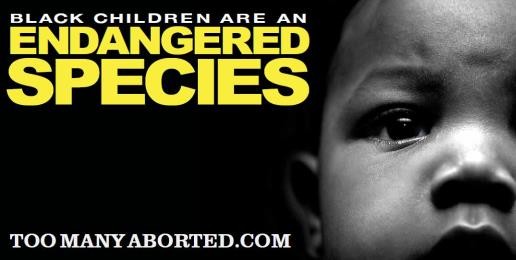 Anyone browsing social media or watching network news is likely to be familiar with #BlackLivesMatter, #ICantBreathe or #HandsupWalkOut. They are terms that express the angst fueling a continuing clash between minority protesters and law enforcement after the tragic deaths of Florida’s Trayvon Martin, Ferguson’s Michael Brown and New York City’s Eric Garner.

For the past several weeks, those hashtag terms have been splashed on protest signs as part of a nationwide outcry against racial profiling, social injustice and raw bigotry.

But while attention has focused on slain Black males, there has been little attention to the deaths of Chicago’s Tonya Reaves, Cleveland’s Lakisha Wilson or Miami Gardens’ Qualecia James. Reaves and Wilson died after surgical abortions. James and the baby she was carrying both died as a result of gang-related gunfire.

The demise of those young women was also tragic, but for the most part has been ignored, says Ryan Bomberger, founder of TooManyAborted.com.

“No riots. No die-ins. No protests. Absolutely no mainstream media converge,” Bomberger writes on social media with the BlackLivesMatter hashtag included. “The lives of black women, snuffed out by real injustice and violence, are completely ignored and treated with nothing but silence.”

“We are joining #Ferguson organizers and protesters in DC today – standing in solidarity with you! #HandsUpWalkOut #BlackLivesMatter,” Planned Parenthood tweeted in the heat of the Ferguson unrest.

But do Black lives really matter to Planned Parenthood?

Not only does Planned Parenthood ignore the tragic abortion-related deaths in the Black Community, they cover up the effect abortion has had on diminishing the Black population.

Nearly a thousand Black babies die in America every day at the hands of abortionists like Planned Parenthood, the nation’s largest abortion provider. Since 1973, 16 million tiny Black lives have perished in abortion clinics.

The CDC reports that nationwide, 36 percent of women obtaining abortions are White, 25 percent are Hispanic and 30 percent are Black. That means Blacks have 60 percent more as many abortions than Whites and Hispanics – exposing them to abortion after-effects and abruptly cutting off the next generation.

Recent Illinois statistics show a steady decline in abortions over the past decade, but Illinois still remains one of the most aborting states in the nation, despite the fact 92 percent of Illinois counties do not have abortion clinics. Chicago is in Cook County, the state’s most populated county, and one that does host abortion clinics.

A comprehensive study by ProtectingBlackLife.org showed that 79 percent of Planned Parenthood’s abortion facilities are located in Black and Hispanic neighborhoods.

“Planned Parenthood has dominated the urban landscape since its own birth in eugenic racism, but rates of unintended pregnancies, STDs, fatherlessness, and abortion have only increased exponentially since Roe v. Wade,” Bomberger writes.

Still, the #BlackLivesMatter movement says it is focused on stopping unfair treatment by law enforcement. Members of a group calling themselves “We Charge Genocide” released a report that held the Chicago Police Department responsible for a rise in the community’s violence.

They filed that report with the United Nations Committee for Torture, saying although Blacks make up 32.3 percent of Chicago’s population, they account for roughly 75 percent of police shooting victims from 2009 to 2013. The group claims that Black Chicagoans are 10 times more likely than Whites to be shot by the police.

While claiming law enforcement is involved in Black Genocide, these groups also defend abortion rights as “reproductive rights” or “reprojustice.”

“For one’s children to be random, unwitting blood sacrifices to the prejudice of faceless others is not freedom,” wrote Katherine Cross at RH Reality Check. “To have reproductive freedom means, among many other things, that your choice to raise a family will not be revenged upon by collectivized prejudice wielding batons and handguns.”

The media’s cooperation with the Left’s agenda has a lot to do with how the situation is being perceived by the public, a key Black conservative says.

“Pray that people will see right through their propaganda,” she said, “The media has another agenda; if they really thought that Black lives matter they would be protesting abortion on demand.”

With the statistics clearly showing that the real threat to America’s Black community are abortionists much more than law enforcement officers, perhaps it is time for Black leaders to hashtag #DoTheyReally? to be added to “#Black Lives Matter.”