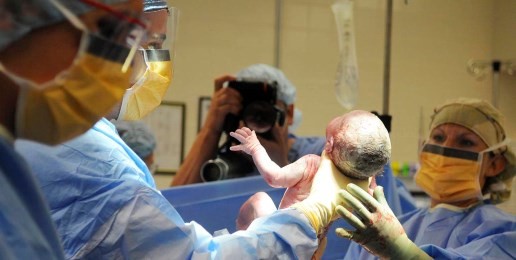 Cecile Richards is no stranger to controversy. As the president of Planned Parenthood she leads one of the central institutions of the Culture of Death — an organization that was born in the dark vision of Margaret Sanger and now exists as the nation’s most visible promoter and provider of abortion. Cecile Richards has been an ardent defender of a woman’s “right” to abort her baby at any time for any reason. She also believes that women should be able to abort their babies for free, with taxpayers footing the bill.

Her support of abortion for any reason and for any stage of fetal development — including the most barbarous partial-birth abortions — was explained, perhaps accidentally, in an interview she recently gave to Jorge Ramos of Fusion TV. When Ramos asked Richards when life begins, she said: “It’s not something I really feel like is really part of this conversation … every woman needs to make their own decision.”

Her non-answer to one of the most fundamental questions of human dignity was shocking enough, but there was more to come. As it turns out, Richards does have a belief  about when life begins.

Ramos was apparently surprised by her evasion of the question and asked, “Why would it be controversial for you to say when you think life starts?”

Seriously? When the conversation is about abortion?

Then she dropped the bombshell:

“For me, I’m the mother of three children. For me, life began when I delivered them. They’ve been probably the most important thing in my life ever since. But that was my own personal decision.”

So life begins at delivery. Until then, no life, no dignity, no sanctity at all. This defies any moral sense, but it also defies modern biology. Cecile Richards did not try to argue the now infamous trimester argument of Roe v. Wade or a point of viability or any other argument about fetal development. As her comment makes clear, in her worldview the fetus doesn’t matter at all.

She identified her three children as “probably the most important thing in my life” since their delivery. Were they nothing to her in her womb? Each of those three precious children was precious in the womb — at every point of development.

Candid admissions of a worldview like this one are rare, but Cecile Richards’ statement perfectly explains her advocacy of abortion at any time for any reason. In her interview the Culture of Death bares its teeth.