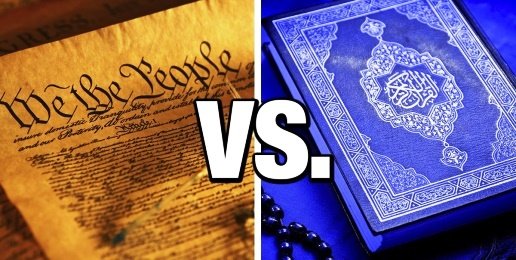 Are these lawyers correct? In the name of religious freedom must America accommodate violent Islamic behavior? Should people here be allowed to govern themselves by Islamic law? In considering these questions we will examine:

A Muslim society wants to be governed by Islamic sensibilities, which are manifested in sharia. The result is a religious government, favoring Islamic believers and discriminating against non-Muslims. According to Wikipedia, sharia is

“…derived from the religious precepts of Islam, particularly the Quran and the collection of books known as the Hadith.”

Under Sharia, plaintiffs come to a religious elder, called an imam. After hearing their testimony the imam uses the Quran, with other holy books, to craft decisions to be enforced by officials.

Some elders, called mufti, are allowed to declare a fatwa. This is a pronouncement about how Muslims should handle a particular circumstance. A Muslim anywhere, not just in the jurisdiction of that mufti, can decide to obey the fatwa or ignore it. Fatwa examples include:

Sharia is biased towards Muslim concepts of justice, rights, and equality. Americans hear these words but don’t realize how Muslims interpret the concepts. Here are some examples of sharia justice.

According to American courts, Sharia is not actually a legal system. In successful arguments before the United States Tenth Circuit court the plaintiff argued:

Because Sharia isn’t based on legal precedent, you might present a Sharia court the same argument multiple times and get a different decision each time. The court relies on the judgment of its imam, who isn’t required to be consistent.

Because of its pro-Muslim bias, an unprepared American plaintiff coming before a Sharia court ought to be in for quite a shock. But even if the plaintiff appeals the verdict to regular civil courts, a Muslim tendency to “take the law into their own hands” might make any appeal moot.

Regarding justice, existing Muslim societies have a dual personality. On one hand is the usual deference to rulers and established government. On the other hand is an acceptance, even encouragement, of vigilantism. It is fairly easy to find instances of mob action, where people are attacked, and even killed, for defaming Islam. No trial, just the lynch mob.

Encouragement to autonomous action is built into Islam. Here the Quran says:

“And when the sacred months have passed, then kill the polytheists wherever you find them and capture them and besiege them and sit in wait for them at every place of ambush. But if they should repent, establish prayer, and give zakah, let them [go] on their way. Indeed, Allah is Forgiving and Merciful.” (Quran 9:5)

This verse spurs continuing attacks on non-Muslims, including Christians. It is just one verse among a multitude that encourage action independent of judges and courts.

A recent European development is the appearance of Sharia patrols. These gangs roam through neighborhoods, intimidating and assaulting residents into sharia-compliant behavior. There were even attempts to start these in Minneapolis and Dearborn.

Once you recognize this tendency towards independent, often violent, action you’ll better understand why there are so many “lone wolf” attacks, and “you offended Islam” riots, by Muslims around the world.

Honor killing is another aspect of this vigilantism. Somehow, Islamic or family honor is restored if you kill a rebellious child, the daughter who is seeing a non-Muslim, or somebody who insults Islam. Some scholars think that Islamic support for honor killing arises from an Islamic parable about Moses (Quran 18:65-81). Through its lawyer, the state of Hawaii claims that honor killing is part of Islamic religious expression.

Whether or not honor killing is explicitly supported in Islam, it is accepted in Islamic societies. This is evidenced by the lack of Muslim mass outrage, and the absence of condemnation from imams, when such killings occur. Because of sharia’s concept of qisas (killing is a civil, not government, problem) there isn’t anything there that discourages taking revenge through independent action.

This tendency towards freelancing the verdicts of Islamic justice suggests why authorizing sharia courts could be dangerous to American communities.

Had the mosque leaders succeeded in their punishment the man would certainly have recourse in state courts. He’d also be permanently without his hand, something no legal appeal can fix.

God told us what He requires of a righteous society and its government. I touched upon this topic in a previous article. In summary, the rulers must:

This is God’s standard for Christian society, Islamic society, and indeed any society.

American law is deeply rooted in English common law, which grew from the Christianized English society. Judges still look to common law when making decisions. Why, then, worry about Islamic courts if America has a Christian foundation? Because American Christians have, by and large, abandoned the public square. We tell ourselves, and are told by others, to leave our religion in the church building. Without the continual guidance of God’s church, which is a preserving salt to society, its guiding light (Matthew 5: 13-16), we’ve accepted all sorts of nonsense and called it justice.

Rulers are to be a terror to wrongdoers, and God’s servants in avenging wrongdoing (Romans 13:3-4). How will our rulers and judges know what must be avenged unless they understand God’s mind on the matter? And who will tell them if the Christians don’t (Romans 10: 14)? It’s high time we again do our duty to preserve and guide American society.

When religion and civil law collide

Soon a judge must decide if an Islamic practice, or a Sharia court, should be allowed in America. The framework used to make this decision will be the Lemon test. From Wikipedia:

The government’s claim of compelling interest in its law is measured by these three tests. The law is upheld if it passes all three tests; otherwise, the law’s restrictions are deemed unconstitutional.

The claim of government compelling interest has been tested many times. Here are a few important decisions.

“The Court recognized that under the First Amendment, the Congress cannot pass a law that prohibits the free exercise of religion. However it held that the law prohibiting bigamy did not meet that standard. The principle that a person could only be married singly, not plurally, existed since the times of King James I of England in English law, upon which United States law was based.”

“He stated that children were not “the mere creature[s] of the state” (268 U.S. 510, 535), and that, by its very nature, the traditional American understanding of the term liberty prevented the state from forcing students to accept instruction only from public schools. He stated that this responsibility belonged to the child’s parents or guardians, and that the ability to make such a choice was a “liberty” protected by the Fourteenth Amendment.”

“The Court found that the government was unable to detail the government’s compelling interest in barring religious usage of Hoasca when applying strict scrutiny as the RFRA demands of such regulations.”

The lawyers opposing Islamic practices, such as sharia courts, will need to prove that the government has a compelling interest in banning them.

Muslims coming to America bring with them their possessions and their cultures. Those that successfully assimilate learn what part of their cultures must change in their new home. The others try to recreate their cultural practices here. One of those practices might be a sharia court.

The successful establishment of sharia courts, rendering enforceable judgments, amounts to colonization, replacing the existing civil authority with their own. Of all of a government’s compelling interests, keeping its own sovereignty is utmost. What approaches can we take to prevent or neuter sharia courts?

No sponsored, or parallel, sharia courts

Sometimes a sharia court is called an arbitration council, which provides advice voluntarily followed by its participants. However, changing its name doesn’t change its character. A sharia court is an Islamic religious proceeding, and government must have nothing to do with it.

If you can’t ban the sharia court, ban its results

Many states have tried banning sharia. However, such bans might not stand up to legal scrutiny. The state of Oklahoma forbade its courts from considering or using sharia. Its ban was overturned by the Tenth Circuit court, largely because it violated the Establishment Clause. That ban mentioned sharia by name, targeting one religion while not affecting any other.

The plaintiffs in the Oklahoma case successfully argued that the ban didn’t define sharia well enough to target it. With that guidance in mind, we should ensure that harm can’t arise from sharia court judgments. If all a sharia court did was provide a chance for Muslims to get together and argue then it would be harmless. Only when its decisions spur criminal action does it become dangerous. If a fear of prosecution deters such actions then the sharia court is neutralized.

Here are approaches that are religion neutral and serve compelling government interest:

Muslims worldwide have called for a ban on speech critical to Islam. To the Muslim world criticizing Islam is blasphemy (Quran 33:57-61). Some people hope to ban criticism in the United States by framing it as a ban on “hate speech.” Such a ban would restrict religious freedom and free speech, and a law banning Islamic criticism runs afoul of the Establishment Clause.

The best defense against sharia in America might be aggressive enforcement against evils done in the name of Sharia. Do we have the fortitude and persistence to prevail?