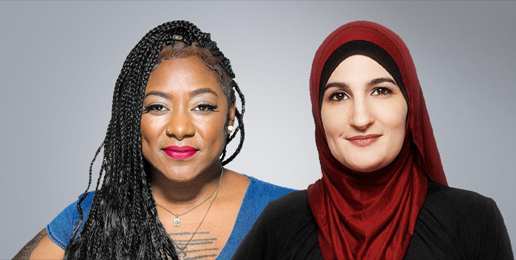 BLM Founder Hails Linda Sarsour for ‘Leading Incredible Movements That Have Changed the Landscape of this Country’
09.16.20
PRINT

As far back as September 22, 2011, Linda Sorsour tweeted: “shariah law is reasonable and once u read into the details it makes a lot of sense. People just know the basics.” Her position didn’t change over time. On May 12, 2015, she tweeted:

If you are still paying interest than Sharia Law hasn’t taken over America. #justsaying.

Sharia Law is misunderstood & has been pushed as some evil Muslim agenda.

Brigitte Gabriel = Ayaan Hirsi Ali. She’s asking 4 an a$$ whippin’. I wish I could take their vaginas away – they don’t deserve to be women.

This call for physical violence against someone she hates received no notice among her sycophants on the Left. Linda Sarsour is also an energetic purveyor of the “Islamophobia” myth and has hysterically claimed that “Muslim kids” are being “executed” in the United States. She was instrumental in prevailing upon New York Mayor Bill de Blasio to end legal and necessary surveillance in Muslim communities in New York. She was also a frequent visitor to the Obama White House, and even claimed that the jihad underwear bomber was a CIA agent — part of what she claims is a U.S. war against Islam.

Sarsour is a practiced exploiter of the “hate” smear against foes of jihad terror and Islamic supremacism and has never apologized for using the Islamic honor murder of Shaima Alawadi to spread lies about the prevalence of hate crimes against Muslims in America. She is also an enthusiastic supporter of the “Palestinian” jihad against Israel and has even claimed that feminists cannot and must not support Israel.

But this is the Left today. Sarsour’s anti-Semitism, her embrace of Sharia, her paranoid “Islamophobia” conspiracy-mongering – all that is the mainstream Left now.

Garza’s remarks came during an April 22nd virtual interview hosted by the Commonwealth Club of California.

The hour-long exchange between Garza and Sarsour served to promote Sarsour’s new book, We Are Not Here to Be Bystanders: A Memoir of Love and Resistance.

Throughout the event, Garza repeatedly fawned over the controversial activist, known for leading the 2017 Women’s March, being openly hostile to Jews, and affiliating with virulent anti-Semite Louis Farrakhan. Even the CEO of the far-left Anti-Defamation League has accused her of “fomenting” anti-Semitism.

Despite this, Garza fawned over Sarsour, who she labeled her “badass friend”:

“How did you go from dope homegirl to leading all these incredible movements that have literally changed the landscape of this country?”

“I am so so excited to be in conversation today with my sister Linda Sarsour,” she continued, unable to contain her excitement over the prospect of interviewing Sarsour.

Garza also inquired about “the resilience [Sarsour’s] been able to generate that makes [her] a badass leader,” signaling admiration for her “unabashedness”:

“How did you find the power inside of yourself and in your community to be resilient and even more unabashed in the face of those really really terrible attacks?”

“You are literally unstoppable. Look at you, building like the largest civic engagement organization in the country, mobilizing, activating, and engaging Muslim communities in democracy. You’re also, you know, out here just like making things happen,” she opined.

While Sarsour’s past comments provide no shortage of controversy, even leading Democratic Presidential candidate Joe Biden to rebuke her appearance at the Democratic National Convention, her remarks during the interview were equally striking.

Declaring “I’m radical, and I’m proud of it,” Sarsour insisted “you’re never too young to be radicalized” before telling viewers she was writing a version of her book oriented for a younger audience of “fourth, fiffth grade through maybe seventh grade” along with a picture book.

Sarsour also insisted that she is so deeply committed to her activism she is “not afraid to die”:

One of the things that has kept me going and it’s something that I tell people and that scares people when I say this because they want to know how did I get here. I’m actually not afraid to die. I really am not and because of that I continue to go back out, back out, back out, and continue to do the work. And if a consequence means I’m going to lose my life for it, I have come to terms with that.

When Garza asked Sarsour to surmise a “60-second idea to change the world,” Sarsour responded that she’d make “every mayor, every governor, and the White House black women.”

As Black Lives Matter continues to attract attention in light of its role in riots plaguing the U.S., unearthed links continue to reveal the group’s affiliation with Marxist and anti-Semitic elements on the left.

This article was originally published by JihadWatch.org.