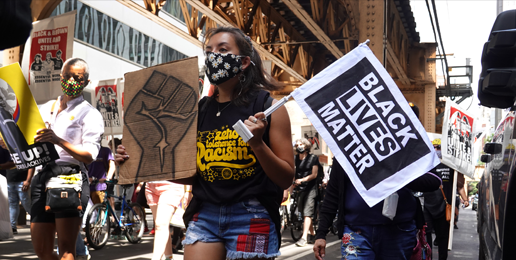 An important new book by historian Paul Kengor sheds considerable light on Karl Marx and by implication the madness and mob violence that has descended on the country.

The throngs setting fire to police stations, looting stores and tearing down America’s cultural history are acting in the name of Black Lives Matter, a Marxist group that our ruling elites have airbrushed and turned into a totem of worship.

The current conflict is not merely a political disagreement over rectifying racial disparities; it’s a clash of religions: atheistic Marxism versus Christianity and Judaism.

At issue is whether the mobs, allied with the Democratic Party and leftist groups, can overthrow America’s Christian-inspired self-governing republic, where our rights come from our Creator, not fickle men in power.

In “The Devil and Karl Marx,” Prof. Kengor explores not only the communist icon’s religious views but how they corrupted so many others over nearly two centuries.

Marx hated God and Christianity with a white-hot passion. His prose is packed with attacks on faith, and his youthful poetry bristles with malice:

Unerringly within thy soul.

God neither knows nor honors art.

The hellish vapors rise and fill the brain

Till I go mad and my heart is utterly changed.

See the sword—the Prince of Darkness sold it to me.

For he beats the time and gives the signs.

Ever more boldly I play the dance of death.

Citing numerous biographies and Marx’s own writings, Prof. Kengor reveals a man whose own family and friends were frightened by his demonic fits of rage and dark babblings about violence.  His own father said he was “governed by a demon.”  A key biographer, Robert Payne, described Marx as having “the devil’s view of the world and the devil‘s malignity.”

When our turn comes, we shall make no excuses for the terror. There is only one way in which the murderous death agonies of the old society and the bloody birth throes of the new society can be shortened, simplified and concentrated, and that way is revolutionary terror.

A direct line can be drawn from Marx to Adolph Hitler, Vladimir Lenin, Joseph Stalin and Mao Tse-Tung, all of whom despised Christianity and embraced murderous forms of socialism.

Before Marx, violent socialism was unleashed in 1789, with the guillotining of 40,000 aristocrats and others.  The French Revolution was ultimately an atheist revolt against the church and the rule of law.  The Jacobins in revolutionary France sought to wipe out history in order to create a Godless utopia. A hint of their fanatical atheism can be seen today in the beheadings in America of statues of Jesus and Mary and the torching of churches.

When Black Lives Matter co-founder Patrisse Cullours boasted in 2015 that “myself” and BLM co-founder Alicia Garza “are trained Marxists,” was she aware of the poisonous pedigree of her stated worldview?  Perhaps it didn’t matter.

BLM’s website is packed with Marxist rhetoric and flat-out lies like this: “In 2014, Mike Brown was murdered by Ferguson police officer Darren Wilson.”  Mr. Wilson, who was acting in self-defense, was cleared during the Obama Administration.  Never get in the way of a useful narrative.

Among other things, BLM is using the LGBTQ movement as a blunt instrument:

We disrupt the Western-prescribed nuclear family structure… foster a queer-affirming network. When we gather, we do so with the intention of freeing ourselves from the tight grip of heteronormative thinking.

The rapidity with which virtually every sizable institution in America has bent its knee to BLM is stunning.  To be fair, most probably think it’s just about racial remonstrance and reforming police procedure, and even love of neighbor and equality before God.

But the call for getting on one’s knees to this movement and parroting their Marxist slogans is anything but sacred. How do Christians, in particular, justify kneeling to anything other than God Almighty and His Son Jesus Christ? A few courageous athletes have refused to go along.

For many, fear of man has triumphed over devotion to God.  Aided by a relentless media, Democrats have embraced Marxist mob rule while few Republicans other than President Trump have found the courage to call it what it is: un-American and evil.

A final word on Marx. If he had had a glimpse into the murderous misery his philosophy would unleash, would he have shelved his books and spared the world?

Hardly likely. Prof. Kengor shares a line from the heroine in one of Marx’s poems:

Thus Heaven I’ve forfeited, I know it full well. My soul, once true to God, is chosen for Hell.