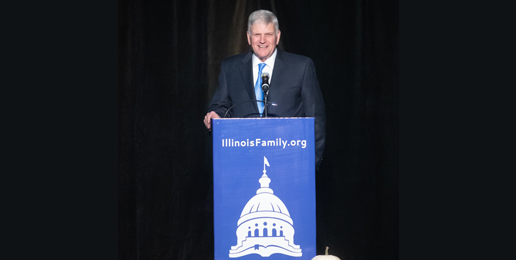 The SPLC Goes After Franklin Graham and IFI
Written By Laurie Higgins   |   11.18.19
PRINT

There may have been some optimistic naïfs somewhere in America hoping that the bipartisan condemnation of the Southern Poverty Law Center (SPLC) for a host of ethical ills followed by  the “resignations” of Morris Dees, Mark Potok, and Heidi Beirich signaled the start of some major housecleaning—housecleaning that might have turned up some morals that had long been tucked away in its Alabama attic. No such luck.

IFI hosted our annual fall banquet on Friday, November 1. This year’s banquet speaker was Franklin Graham. Shortly thereafter, one of the SPLC’s Grand Inquisitors, Brett Barrouquere, contacted IFI in a then-suspected, now-confirmed effort to ferret out any sexuality heresy that Franklin Graham may have expressed. To be clear, I mean views that the SPLC deems heretical. The Inquisitors at the Society for the Persecution and Libeling of Christians seek nothing less than either exile or baptism in the pagan “LGB” and “T” religion of sexual anarchy.

Although no one expects the Southern Inquisition, I did suspect the faux-friendly questions in Barrouquere’s email were laying the groundwork for a smear of Franklin Graham, so I declined to answer them. Instead, since Inquisitor Barrouquere identifies as a muckraker, I quoted a short passage from The Pilgrim’s Progress, which is the source of the term “muckraker.” About all of this I wrote on November 12.

Then on November 13, the SPLC published the anticipated smear of Graham and IFI. Here’s part of what the Inquisitors (or as they refer to themselves portentously, the “Hatewatch Staff”) wrote:

Graham was guest speaker at the anti-LGBTQ hate group Illinois Family Institute’s annual fall banquet titled “Faith, Family and Freedom.” Graham’s remarks included his support of President Donald Trump and what he called the nation’s faltering state of morality. But his appearance at the Nov. 1 event outside Chicago links him to a group with a history of anti-LGBTQ stances perhaps even more extreme than his own.

The Illinois Family Institute is a state affiliate of anti-LGBTQ hate group American Family Association, though it operates independently.

Examples of the Illinois group’s statements about LGBTQ people include that homosexual behavior is “medically, emotionally and spiritually unhealthy.” In July, Laurie Higgins, a cultural affairs writer for the group, said that trans people are harming children, stating that the “ravenous, pro-‘trans’ behemoth smells the blood of children in our murky cultural waters and is hurtling toward them with blinding speed.” Higgins went on to say that “trans activists [are] in league with ‘many homosexuals’” and are “propagandizing, grooming, and mutilating children.”

While including links to the original sources for most of the quotes or facts in their article, for some odd reason, the Inquisitors omitted a link to my article from which they quoted. Could it be they were willing to sacrifice journalistic ethics to prevent their audience from reading the context for the quotes they cherry-picked?

In the service of transparency and sound reporting, click here to read the article to which the SPLC didn’t link, an article that details the seamy side of the “trans” cult’s assaults on childhood innocence that the Inquisitors didn’t want their audience to see.

Maybe the Inquisitors didn’t want their audience to read about the company TranZwear that makes an “extra-small” silicone penis and testicles called a “packer” for girls under five who wish they were boys. And maybe they didn’t want their audience to learn that handmade colorful underpants called “tuck buddies” that conceal the penises and testicles of boys ages 3-14 who wish they were girls can be bought on Etsy.

I sent the link to Inquisitor Barrouquere, so he could add it to the article. So far, he has not fixed his omission.

Once more for the obtuse, deluded, or deceitful:

The Illinois Family Institute does not hate people. IFI holds theologically orthodox, historical Christian views on volitional homosexual activity, marriage, and cross-sex identification. We also hold theologically orthodox views on love, which is inseparable from truth. We believe genuine love—as opposed to what passes for love today—entails seeking for others that which is true and good. Genuine love as demonstrated by Christ does not entail affirming all the feelings, beliefs, and volitional acts of others. Genuine love entails concern for both temporal and eternal lives.

We believe the assumptions espoused by both the homosexual and “trans” communities are harming individuals—especially children—and society. Schools are inculcating children with arguable assumptions that are presented as objective facts. The medical community is chemically sterilizing and surgically mutilating children. Scientists in the hard sciences fear personal and professional repercussions if they express the scientific fact that the human species is sexually dimorphic. The arts and academia suppress dissent from the “LGB” and “T” ideologies. And nothing poses as great a threat to First Amendment protections as those ideologies. Both ideologies depend on an utterly nonsensical comparison of skin color per se to subjective, internal sexual feelings per se, and no one is discussing the sandy foundation on which these ideologies are built.

If these ideologies are false, then opposing them is the antithesis of hatred. Believing an assumption is wrong, or believing a volitional sexual act is immoral does not constitute hatred of persons who believe differently and act in accordance with their beliefs. Perhaps SPLC hatewatchers hate everyone who holds different beliefs and moral precepts than they do, but they ought not impute their habits of mind to others. We at IFI, like many other people, are fully capable of loving those who believe differently and act in accordance with their beliefs—even false and destructive beliefs. And we will express our beliefs with the boldness and clarity that the sanctimonious deceivers at the SPLC express theirs.

Do theologically orthodox Christians still not realize what their silence is facilitating? Their silence is facilitating their own oppression and that of their children and grandchildren. The “LGB” and “T” dogmatists and their regressive allies seek to outlaw the expression of moral claims derived from Scripture that they detest—all in the deceitful names of compassion and inclusivity.

To those misguided Christians who hold the unbiblical belief that Christians are obliged never to say anything sassy, saucy, bold, or hated by those who propagate evil, IFI says this:

If you don’t like the way we address the egregious evil disseminated everywhere by God-haters—the evil ideas that are corrupting the hearts and minds of children, sterilizing and mutilating their bodies, and robbing them of mothers and fathers—then find another way to speak truth about evil. But don’t waste time trying to find the way that won’t enrage homosexual activists, “trans” cultists, and their legion of feckless water carriers. There is no such way. And remember, Christ didn’t promise Christians a cost-free life. He promised us a costly life that entails taking up our crosses daily and being hated by the world that first hated him.

A Kindler, Gentler Anti-Christian SPLC?
b
a
x
r