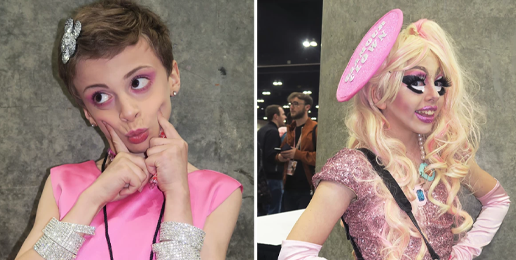 The ravenous, pro-“trans” behemoth smells the blood of children in our murky cultural waters and is hurtling toward them with blinding speed aided by the ignorance (perhaps willful) and cowardice of decent people—people who prefer not to hear about the grotesqueries the “trans” cult has in store for our little ones.

Like the dismemberment of living humans in their mothers’ wombs, the most grotesque acts being perpetrated against born children are being committed in sanitized medical establishments by Dr. Mengeles. These deceived or  deceiving doctors amputate the healthy breasts of confused or mentally ill girls as young as 13, chemically sterilize physically healthy teenage girls and boys, and castrate teen boys as young as 18.

Dr. Diane Ehrensaft, chief psychologist at the Child and Adolescent Gender Center Clinic at San Francisco’s Benioff Children’s Hospital, posits that children as young as two can know they aren’t the sex they, in reality, are:

“We expect a 2-year-old to know ‘I am boy. I am girl.’ So why can’t that also apply to transgender children?”

Ehrensaft’s statement implies that toddlers’ subjective, internal feelings about their maleness or femaleness are analogous to their objective, immutable biological sex. But for a boy to know he is a boy constitutes recognizing an immutable and objective fact, like knowing the earth is round. For a boy to think he is a girl is not knowledge; it’s delusion. And research shows that between 80-95% of cases of gender-identity confusion in prepubertal children will resolve on their own.

Further, Ehrensaft believes the subjective, internal feelings of toddlers about their maleness or femaleness supersede in importance and value their biological sex. But such a belief is not an objective fact. It’s a radical, subversive dogmatic assumption spreading like cancer throughout the sickly body of America.

Ehrensaft also claims that “Most people who are born with a penis will be boys, but some of them will be girls. Most people who are born with a vagina will be girls, but some will be boys.” To be clear, Ehrensaft is not referring to those born with intersex disorders of sexual development. She is referring to genetically normal children born with healthy, fully functioning anatomy. It is nonsensical, science-denying sophistry to say babies “will be” boys or girls. They are boys or girls. Their sex will never change.

From this “trans”-affirming, child-destroying theory has emerged a profitable cottage industry for all sorts of mercenaries including gender-identity propagandists; pharmaceutical companies peddling the puberty-blocker Lupron and cross-sex hormones; psychologists, endocrinologists, urologists, and cosmetic surgeons; nonfiction and fiction writers; entrepreneurs hawking costumes to conceal biological sex; and other manifestations of a deeply corrupted culture.

Here are just a few of the countless cultural assaults on the dignity and health of children:

And hot!… No wonder 11-year-old Desmond Napoles and other kids daringly diving into drag culture right now have provoked right-wing reactionaries into paroxysms of moral outrage.

Let’s face it, when a pretty young boy tells the world he is gay and dances sensuously in front of grown men, wearing vampish dresses and makeup; when “she” strips off items of clothing or goes on stage scantily clad right from the off; when dollar bills are accepted as “tips” from an audience apparently wild with excitement; when all this is going on we are getting far more than just a celebration of gender diversity or an innocent display of precocious performance talent.

… It is wonderful that a rare niche has been found in the modern, developed world within which at least a few kids can truly be themselves, in ways that deny neither their gender feelings nor their sexuality. Being a drag queen, or a drag princess if you will, puts it right out there, in the open for all to see. It says, loud and proud, “I am a sexy kid, with sexy feelings. It’s totally cool for grown-ups to get turned on by me. I love it. That’s why I do this stuff….”

Drag is not “simply a means of gender play and expression”, though that is obviously a significant aspect of it. Sure, drag can be performed with wholly non-erotic intent and often is: Dame Edna Everage, for instance…. But when a kid declares himself to be gay, as Desmond has, he is talking about sexual feelings: “gay”, after all, refers to a sexual orientation not a gender identity. If his interest in wearing girls’ clothes was an expression only of his gender identity he would see himself as “trans”, not “gay”….

So why all the denial? Why the coy insistence that kids’ drag performance has nothing to do with their sexuality? Hypocrisy, basically. For decades now, gay politics has revolved around respectability, and that has meant aping hetero-normativity: gay couples with committed relationships, marriage, and parenthood, have become the promoted model; the old, carefree “promiscuity” of the gay life is frowned upon (if still a reality for many) and any cross-generational sexual contact with youth is now far more taboo than it ever was in the “bad old days” when homosexuality was a discretely practised underground phenomenon.

Hypocrisy is detestable for its dishonesty; but on the other hand it works. Politically, it makes sense. Denial of the sexual element in kids’ drag performances has recently resulted in them being perceived as on the “respectable” side of the gender revolution….

Our professional mental health and medical communities are controlled by Leftists who have no hard science supporting the fanciful notion that children of one biological sex can have the brains of the opposite sex.

They have no hard science proving that lifetime, cross-sex-hormone-doping is safe.

They have no hard science proving conclusively that gender dysphoria or cross-sex identification in young children and teens is immutable.

They have no hard science proving that sexual abuse, other forms of trauma, autism, social contagion, or other environmental factors are not factors that can result in gender dysphoria or cross-sex identification.

They have no hard science proving that the suicidal ideation and depression that often accompany gender dysphoria/cross-sex identification are caused by social stigma as opposed to being caused by whatever caused the desire to be the opposite sex.

They have no proof—nor will any proof ever be available—that affirming a child in the rejection of his or her biological sex is good, right, or morally justified.

Leftists believe that the relief cross-sex-identifying children feel when affirmed in their cross-sex identification means that disapproval is intrinsically wrong, but do they apply that principle consistently? Do they, for example, apply it to anatomically whole people who experience Body Integrity Identity Disorder and identify as amputees?

The ubiquitous effort by sexual anarchists/reprobates to revolutionize what’s left of American “culture” is no more apparent than in the juggernaut to “trans” children. By “transing” children, I mean the comprehensive effort to destroy their hearts, minds, wills, and bodies. “Trans” activists in league with many homosexuals—though not all—have gained breathtaking institutional power and are propagandizing, grooming, and mutilating children in the service of a science-denying, cultic superstition. And conservatives largely say and do nothing even as these evil things are done in schools where they send their children, in schools where they work, and in their public libraries. They should be ashamed.