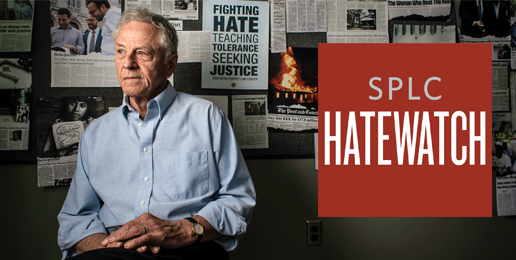 On Friday Oct. 8, IFI received this strangely kind email from the Southern Poverty Law Center (SPLC) “investigative reporter” Brett Barrouquere (an email similar, I learned, to one sent to Mark Krikorian, Executive Director of the Center for Immigration Studies, but more on that later):

I’m a reporter with The Intelligence Project in Montgomery, Alabama. I hope this finds you well.

Currently, I’m assisting a colleague with a story about Franklin Graham speaking to IFI. Why did IFI choose him as a speaker? What did he tell the group? How was he received during his talk?

And, has Mr. Graham spoken to the group before? If so, when?

We are aiming to produce a story next week. Thank you for your time and assistance.

I say “strangely kind” because IFI has been included on the SPLC’s “hate” groups list since 2008, one month after I began working for IFI. At the time, the SPLC had zero criteria for determining which groups or individuals constitute haters, a fact I pointed out in articles and to the unscrupulous, unpleasant Mark Potok and his equally unscrupulous, unpleasant henchperson Heidi Beirich, both of whom headed up the “Intelligence Project” that maligns conservative organizations as “hate groups.”

Both Potok and Beirich have “resigned” in the wake of widespread, bipartisan criticism of the SPLC’s profligate, unjustified labeling of conservative organizations as “hate” groups; the SPLC’s abandonment of its mission to combat racism; its greedy profiteering and fear-mongering; and accusations of sexual misconduct and racism leveled at disgraced and fired founder Morris Dees. You can read more about our history with the moral miscreants at the SPLC in my article “A True Story About the Southern Poverty Law Center.”

Upon receipt of this strangely kind email with strange questions about Franklin Graham, who just a week earlier was IFI’s keynote banquet speaker, I decided to find out a bit about Barrouquere. I discovered he omitted something from his job title. On the website Muck Rack, he identifies as “Investigative Reporter at SPLCenter and @hatewatch.”

Barrouquere is profiled on the professional journalism website Muck Rack, which derives its name from the term muckrake. Theodore Roosevelt coined the term “muckrakers” to refer to journalists who investigate and expose corruption with the intent of reforming society. But the origin of the term muck-rake is older and more fitting of the SPLC’s dirty work. This is what I wrote to Barrouquere:

Surely you jest. You want IFI to help the ethically impoverished SPLC’s risibly named “Intelligence Project” produce what is likely yet another smear of a good person?

Muck-raker is a fitting description for those who do the dirty work of the SPLC. Here is the origin of the term “muck-raker” from John Bunyan’s The Pilgrim’s Progress:

“the Interpreter takes them apart again, and has them first into a room where was a man that could look no way but downwards, with a muck-rake in his hand. There stood also one over his head, with a celestial crown in his hand, and proffered to give him that crown for his muckrake; but the man did neither look up nor regard, but raked to himself the straws, the small sticks, and the dust of the floor…. his muck-rake doth show his worldly mind. And whereas thou seest him rather give heed to rake up straws and sticks, and the dust of the floor, than to do what he says that calls to him from above with the celestial crown in his hand; it is to show that heaven is but a fable to some, and that things here are counted the only things substantial. Now, whereas it was also showed thee that the man could look no way but downwards; it is to let thee know that earthly things, when they are with power upon men’s minds, quite carry their hearts away from God.”

Many don’t know that the SPLC also has a toxic “educational” arm called “Teaching Tolerance” whose de facto goal is to carry the hearts of other people’s children away from God:

Our mission is to help teachers and schools educate children and youth to be active participants in a diverse democracy.

Teaching Tolerance provides free resources to educators—teachers, administrators, counselors and other practitioners—who work with children from kindergarten through high school. Educators use our materials to supplement the curriculum, to inform their practices, and to create civil and inclusive school communities….

Our program emphasizes social justice and anti-bias. The anti-bias approach encourages children and young people to challenge prejudice and learn how to be agents of change in their own lives. Our Social Justice Standards show how anti-bias education works through the four domains of identity, diversity, justice and action.

Conservatives should no longer be duped by leftist jargon. Anytime the terms “educate,” “civil,” “inclusive,” “social justice,” “anti-bias,” “challenge prejudice,” “identity,” and “diversity,” appear, you know you’ve entered the Upside Down where the meanings of terms bear little resemblance to their true meanings:

The SPLC’s description of Teaching Tolerance omits mention of the chief goal of the SPLC: the eradication of theological orthodoxy from the public square.

Coincidentally, on National Review’s blog “The Corner,” Mark Krikorian of the Center for Immigration Studies (CIS) shared that he received a similar email from another “investigative reporter” with the SPLC at about the time IFI received ours. CIS is part of a lawsuit against the SPLC, which added CIS to its infamous “hate groups” list shortly after Trump’s election.

Krikorian’s email, which he hilariously describes as a “Howdy, Hater!” email, came from senior investigative reporter Michael Edison Hayden, who in late September tweeted out “I’m extremely excited about the team we are assembling @Hatewatch.”

Hayden begins with the kind of warm salutation—the “Howdy” part—one wouldn’t expect from someone who views you as a hater and scourge of society: “I hope you guys are having a good day. If you DC folks are a Nationals fan, congratulations.”

Then, Hayden got down to the nitty-gritty “Hater!” part:

Anyway, I wanted to ask you guys about some stuff I have on my plate here. Someone sent me a rather large volume of Stephen Miller’s emails from the run-up to the 2016 election. There are a lot of newsworthy things in these emails…. I know he gave a keynote for you in 2015, so obviously there is some degree of connection but I didn’t know how much.

Hayden went on to ask five questions about CIS’ involvement with Stephen Miller, Trump’s senior policy advisor, including asking about the degree of “closeness” between CIS and Miller, which is similar to the question Barrouquere asked IFI about Franklin Graham.

Krikorian, who, rather than responding to Hayden, forwarded his email to attorneys handling the lawsuit, noted the bizarre conclusion to Hayden’s email:

The e-mail ends, inscrutably, with “Warm regards”. But either you’re writing to the head of a “hate group” who thinks foreigners are “cockroaches” or you offer “warm regards”—it can’t really be both.

The SPLC has proven repeatedly for decades that it is incapable of intellectual consistency, honesty, or morality. The SPLC hasn’t changed its stripes.