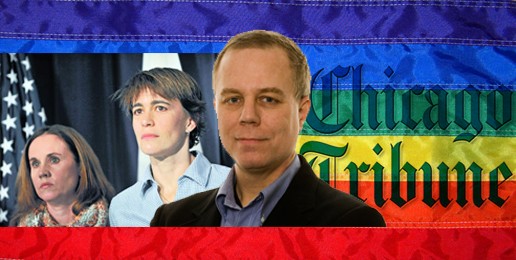 Politicians and pundits are making mincemeat of marriage, faith, and religious liberty.

Rumors are circulating that Illinois House Speaker Michael Madigan (D-Chicago) and homosexual activist, State Representative Greg Harris (D-Chicago) may call for a vote on the marriage redefinition bill (SB 10) next week. Because their ideological accomplices in the political and punditry spheres are promoting this effort with fervor and tenacity, it’s essential that Illinoisans understand the specious nature of the arguments that animate them. The Chicago Tribune once again provides a cornucopia of lousy — that is to say, false and destructive — ideas about marriage, ideas which, unfortunately, extend beyond the narrow boundaries of the Tribune and the narrow minds of newly installed Chicago Alderman Deb Mell, Tribune columnist Eric Zorn, and Governor Pat Quinn.

Lesbian activist Deb Mell’s recent Tribune commentary isn’t actually a rational argument for the redefinition of marriage. Rather, it’s an extended piece of demagoguery that embodies and conceals a troubling set of assumptions and an absurd conclusion. And it’s the only thing Mell’s got, so she repeats it ad nauseum.

While Mell replaces sound logic with appeals to emotion, Eric Zorn replaces it with ad hominem arguments and condescending dismissals, starting with calling business owners who make distinctions between right and wrong actions “intolerant.” To business owners like the Christian photographers who have been fined $6,637 for declining to photograph a lesbian commitment ceremony, Zorn offers these tolerant and compassionate responses: “Tough,” “Please,” “Yawn,” and “Then don’t open a business.”

Zorn believes that anyone who makes moral judgments with which he disagrees is intolerant. One wonders, would Zorn similarly malign a photographer who refused to photograph a commitment ceremony between a father and his 30 year-old consenting daughter? And let’s complicate the question by hypothesizing this refusal comes during a time when laws prohibiting incestuous acts between consenting adults have been repealed. After all, the government has no business in our bedrooms.

Out of either ignorance or dishonesty, Zorn fails to address the fact that the photographers did not decline to photograph homosexuals. They declined to photograph a homosexual ceremony. They were not discriminating against people. They were making legitimate ethical distinctions among types of activities—an inconvenient truth for “progressives.”

Zorn seems to believe that the ultimate arbiter of all matters moral is THE LAW. Yes, laws like the Illinois Human Rights Act, which was created by Left-leaning Illinois politicians in cahoots with homosexual activists, are the ultimate arbiters of moral truth. Regarding religious liberty, Zorn says:

“You want to open a business that serves the public? Then you can’t practice discrimination on the basis of…religion…sexual orientation and so on….The law [the IL Human Rights Act] doesn’t care what you think about customers in these protected categories.”

Zorn doesn’t seem to see his inconsistent application of both a principle and a law. He uses the law that prohibits discrimination based on “sexual orientation” and religion to compel business owners to engage in an activity that violates their religious beliefs.

Further, “sexual orientation” is merely a dishonest term concocted to disguise the fact that a condition constituted by subjective sexual desires and volitional sexual acts has no similarity to other protected categories. Zorn with unequivocal eagerness subordinates religious liberty to the newly minted sexual “rights” of homosexuals. Methinks there’s some rollicking grave-rolling roiling the cemeteries of our Founding Fathers.

Zorn harrumphs that the religious protections in the proposed marriage revision bill that protect the right of churches to refuse to solemnize homosexual “weddings” are all the protections conservative people of faith deserve. This exposes Zorn’s ignorance of what it means to be a Christian and what the First Amendment was intended to protect. The totality of the life of a Christian is informed by his or her faith. There is no distinction between the sacred and the secular spheres for true followers of Christ, a point Martin Luther King Jr. eloquently expressed in his “Letter from Birmingham Jail.”

Governor Quinn, who claims to be a Roman Catholic, reveals, like Zorn, a troubling measure of theological ignorance. Quinn defends his defiance of the teachings of the Catholic Church on marriage by stating that he is acting in accordance with his “conscience.” Zorn and Quinn share a strange and stunted view of faith, doctrine, and religious liberty. Zorn wants to keep religion out of the public square. Quinn wants to keep it out of the public square and his conscience.

IFI is extending an urgent plea to our readers to take a few moments to express your opposition to SB 10, the bill that will permit the government to recognize non-marital unions as marriages, will harm children, and will further undermine religious liberty. It’s not just homosexual activists in Illinois who are watching this vote. Homosexual activists and their ideological allies throughout the country are watching Illinois. So too are conservatives in other states in which marriage is now or soon will be under attack. Defeat of this bill will offer hope to them.

Please help your Illinois Family Institute remain strong in this fight.
Please, click HERE to contribute what you can today.