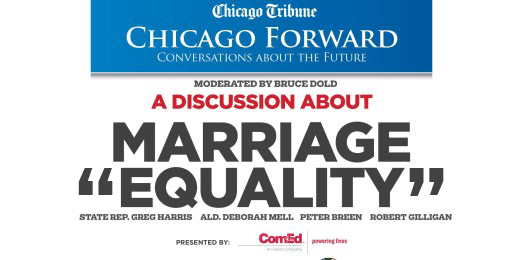 In a stunning public admission during a debate on the future of marriage in Illinois, the chief sponsor of SB 10, the proposed bill to legalize same-sex “marriage,” homosexual State Representative Greg Harris (D-Chicago) acknowledged that the bill does not provide religious liberty or conscience protections for individual Christian business owners. Further, it was clear that both he and homosexual Chicago Alderman Deb Mell (a former state representative and co-sponsor of of SB 10) oppose any such protections.

In the unfortunately titled “Marriage Equality” debate, sponsored by the Chicago Tribune, moderator Bruce Dold asked Harris about the absence of conscience protections in the bill:

Harris: [D]ecades ago when the Human Rights Act was passed, it said, we the people of Illinois have decided not to allow discrimination based on race, religion, sexual orientation, disability, veteran’s status in housing, employment, or public accommodations. The question of should we treat all of our citizens equally in all of those three areas has been answered. But also there are exemptions for religious institutions in the Human Rights Act. There’s also the Religious Freedom Restoration Act, and specific language in this bill…that explicitly protects freedom of religion for those churches and denominations which do not want to consecrate same-sex marriages.”

Harris publicly admitted that this bill protects the religious liberty of only religious institutions, churches, and denominations—not individuals. It was clear that Harris has no desire or intent to include such protections.

That said, the inclusion of such protections would not make this a good bill. It would simply make it a less terrible bill.

Harris tried to claim that SB 10 poses no threat to religious liberty, but was challenged by both Robert Gilligan, Executive Director of the Catholic Conference of Illinois, and Peter Breen, Vice President and Senior Counsel with the Thomas More Society, who talked about the Illinois bed and breakfast owner who is being sued for his refusal to rent out his facility for a same-sex civil union ceremony  (read more HERE).

Mell, who earlier had claimed that warnings about future religious persecution were dishonest “scare tactics,” responded “But [the bed and breakfast] is a business that does business in the state of Illinois, and in Illinois, we don’t allow discrimination.” While claiming that warnings about loss of religious liberty were deceptive and false “scare tactics,” she vigorously defended this religious discrimination. She apparently didn’t notice her own contradiction.

Harris cited the Illinois Human Rights Act as his justification for not protecting the rights of people of faith to refuse to use their labor and goods in the service of an event that violates their deeply held religious beliefs. Well, the Illinois Human Rights Act also prohibits discrimination based on religion; hence the conflict of which Chai Feldblum spoke. Harris finds discriminating based on religion tolerable and justifiable but not discrimination based on sexual predilection.

By the way, choosing not to participate in a same-sex “wedding” does not reflect discrimination against persons. It reflects discriminating among types of events. The elderly florist who is being sued by the state of Washington for her refusal to provide flowers for a same-sex “wedding” did not discriminate against a person. She made a judgment about an event. She had previously sold flowers to one of the homosexual partners. She served all people regardless of their sexual predilections, beliefs, sexual activities, or relationships. She just wouldn’t participate in an event that she (rightly) believes the God she serves abhors. She takes seriously Jesus’ command to “Render unto Caeser what is Caesar’s, and unto God the things that are God’s.”

Prior to the debate, I had a conversation with one of the event planners in which I predicted Harris would refuse to answer the critical question regarding why marriage should remain a union of just two people. Dold twice asked, if marriage is a right, why should it be limited to two people? Twice Harris obstinately refused to answer.

It was an embarrassingly obvious and intellectually dishonest dodge. Harris tried to use the language of the current bill to deflect the question saying in essence that the bill’s language says nothing about plural unions. This is the same embarrassing dodge ACLU spokesman Ed Yohnka used in a program on which both he and I were guests. Three times I asked him why marriage should be limited to two people, as he claimed it should be. Three times he awkwardly refused to answer.

It doesn’t take much intellectual wattage to understand that once the ideas that marriage is just about love and has nothing to do with sexual complementarity or reproductive potential are embedded in law, there remains no reason to restrict marriage to two people. The legalization of plural unions becomes not merely possible but inevitable.

Harris also said, “All families should be created equal,” to which I would have asked, “Even polyamorous families?”

And he said marriage law should “expand to reflect the reality of society,” to which I would have said, “But there exist polyamorous families in society.”

A few additional thoughts on the debate:

There is no more critical legislation pending than SB 10. Despite what some lawmakers and pundits fecklessly claim, this issue is more important than even pension reform. The rights of children, parents, and people of faith are at risk.

Demonstrate that you care more about preserving marriage than the Left does in destroying it. Demonstrate your willingness to endure hardship and even persecution in the service of truth.

Please call your lawmaker, and please try to attend the Defend Marriage Rally in Springfield on Oct. 23. The Left will be marching on Oct. 22.

Chicago Trib Demagogue Who “Identifies” as Reporter, Goes After State Rep. Ives
b
a
x
r