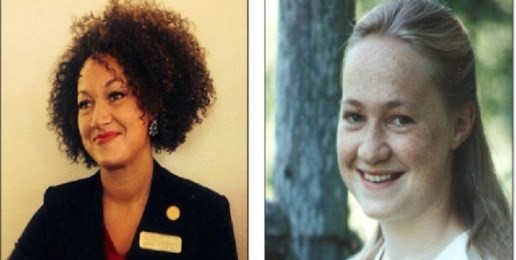 Once more for the hard of hearing or weak of understanding: The athlete formerly known as Bruce is not now nor ever can be a woman. Further, it is the apex of cruelty and ignorance to pretend along with him that he is.

If the cultural dictators continue to demand that everyone in society participate in this delusional, dishonest, destructive fiction, then intellectual consistency requires that they demand everyone in society to treat Africana Studies professor and race activist Rachel Dolezal—who is in reality of Central and Eastern European descent—as if she is African American.

Dolezal has been reverse-“passing” for years, falsely claiming to be African American. She has modified her physical appearance to align with her self-conception. She is “trans-raced.”

In addition, society needs to revisit the treatment protocols available to those who experience Body Integrity Identity Disorder (BIID), which causes sufferers to identify as amputees (Click here to read more on BIID). In order to alleviate the disturbing sense of discordance between their feelings and their bodies, they desire to have a limb amputated. Some even go so far as to mutilate themselves in order to force the medical community to amputate a limb. Society rightly views the disordered desire of the “trans-abled” to amputate healthy body parts as barbaric. Society largely believes, for now, that the compassionate, humane treatment protocol involves medication and counseling to encourage those who suffer from BIID to accept their bodies.

And finally, let’s not forget the “trans-specied” who identify as sloths. Surely an evolving society must adapt by changing its work-productivity expectations. Sloths can’t possibly produce at the frenetic pace of alpha humans or even alpha wolves.

The Chicago Tribune once again revealed how foolish smart people can be. In yesterday’s editorial on Jenner, the Trib editorial board employed the imbecilic and insulting comparison of opposition to interracial or interfaith marriage to disagreement with the ontological and moral assumptions of Leftist sexuality dogma:

There was a time when intermarriage between faiths and races was taboo….Then the culture shifted and what seemed wrong or abnormal became accepted, and normal….Now we’re in a moment of cultural discovery about another frontier in sexual politics. This moment will pass and transgenderism will seem different, but not so strange.

The board conveniently omitted any discussion of whether or how faith or race per se correspond to gender dysphoria, cross-dressing, elective amputations of healthy body parts, and cross-sex hormone-doping. Such a discussion may have revealed the speciousness of such comparisons.

It isn’t discomfort or bewilderment that impels opposition to “transgender politics.” It is intellectual reasoning and science. In contrast, the uncritical embrace of all things sexually deviant demonstrated by the Left is impelled by feelings and doctrinaire ideology, largely divorced from philosophical reasoning, common sense, and science.

The Left has embraced the moral solipsism of the “LGBTQQAP” movement, which denies that anything outside the self exists that can serve as an arbiter of moral truth. That’s why the movement is rife with intellectual and existential inconsistencies and incoherence. Of course, they then judge moral disapproval of homoerotic activity and “transgender politics” as inherently immoral.

The issue of whether to call gender dysphorics by opposite sex names is a peripheral distraction. In some contexts, their original name may be unknown, so their adopted opposite-sex name is all people will know. What is not peripheral, however, is the issue of pronoun-use. Referring to a man as “she” or a woman as “he” constitutes a denial of reality, otherwise known as lying. Gender dysphorics cannot become the other sex. That is a matter of science. Neither “LGBTQQAP” activists, nor their ideological “allies,” nor arms of the government (e.g., public schools) have the ethical right to compel others to lie. And facilitating a destructive fiction is the antithesis of love and compassion.

Oh what a tangled web…

Your support of our work and ministry is always much needed and greatly appreciated. Your promotion of our emails on Facebook, Twitter, your own email network, and prayer for financial support is a major part of our ability to be a strong voice for the pro-life, pro-marriage and pro-family message here in the Land of Lincoln.

Butchering Bodies of Suffering Young People
b
a
x
r