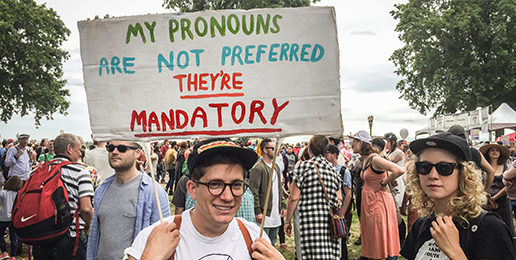 In a recent opinion piece in the New York Times, British writer “Juliet” Jacques, a 38-year-old man who pretends to be a woman, claims “Transphobia … is a respectable bigotry in Britain, shared by parts of the left as well as the right.”

Jacques claims that there are two virulent strains of “transphobia”: One strain “rejects … the idea that gender might not be determined only by biological traits identifiable at birth,” and the other strain, “argues that trans women’s [i.e., biological men’s] requests for gender recognition are incompatible with cis women’s [i.e., normal women’s] rights to single-sex spaces.” Jacques claims that both strains “rely on the conceit that trans and nonbinary people should not determine their own gender identities.”

Translated from “trans”-tortured Newspeak into plain English, Jacques is describing two groups of people still tethered to reality. The first group rejects the idea that biological sex is subordinate to subjective feelings about sex in importance and in how it’s treated in society. The second group believes women have a right to private spaces free from the presence of biological men.

For those not fluent in Newspeak, “gender identity” refers to the subjective internal (or is it infernal?) feelings of reality-untethered people about their maleness, femaleness, both, or neither. Jacques errs when claiming that both reality-tethered groups believe “trans” and “nonbinary” people should not determine their own “gender identities.”

The reality-untethered are demanding that in shared spaces, their subjective feelings about maleness and femaleness supersede biological sex. Those who believe that spaces like locker rooms and activities like sports should correspond to biological sex are being denied their right to determine their sex identities. And the reality-untethered bio-rejectors are demanding that others use language that denies biological reality. They’re demanding that others use language that affirms an imaginary worldview. They’re demanding that their “hurt feelings” determine how others must speak. While they demand that I respect their “reality,” they ignore that my reality includes not just me but everything in the world.

To advance a reality-untethered social and political universe requires the silencing of rational and moral arguments, and that, in turn, requires cultural oppression, known colloquially as bullying.

“Transphobe” is the term of bullying art used to shame and silence anyone who believes biological sex has meaning and that it is more important than subjective, internal feelings about one’s maleness, femaleness, both, or neither.

The chief tactic of sexual anarchists to crush their ideological opponents is to attach the word (or forms of the word) “phobe” to any moral claim they, in their ignorance, detest. They detest the moral claims that homoerotic acts are immoral; degrade those engaged in them; and harm children, families, and society. So, anyone who makes these claims is called a “homophobe.”  Even if these claims are expressed out of love for individuals, children, families and society,  the “LGB” community calls those who express them “homophobes,” haters, and bigots because bullying works.

“Trans” cultists detest the claims that biological sex is profoundly meaningful; that private space-usage should correspond to biological sex; and that cross-dressing, cross-sex hormone-doping, and elective amputations of healthy body parts to treat immaterial feelings is harmful, so anyone who expresses these claims is called a “transphobe,” because bullying works.

While “LGB” and “T” activists and their collaborators claim to worship at the altar of inclusion, tolerance, and non-judgmentalism, and claim to loathe all shaming, marginalization, and taboos, they don’t.

They seek to shame, marginalize, and exclude anyone who doesn’t affirm their sexuality dogma.  They judge theologically orthodox Christians as sinners for rejecting sexual insanity. And they justify their judgmentalism by asserting that they have no obligation to “tolerate intolerance.”

Soon all those ignorant, hateful, exclusionary bigots who don’t understand that “love is love” will be called polyphobes, kinphobes, pedophobes, and zoophobes. “Shaming” polys, kin-lovers, child-lovers, teen-lovers, and animal-lovers will be deemed analogous to racism.

Next to arrive on the already defiled cultural scene will be activists for other even fringier paraphilias. Those who identify as sadists, masochists, infantilists, and voyeurs will claim that to live authentically requires no one disapprove of their peculiar habits. Normal people who yet have a moral compass and spine will be called sadi-phobes, maso-phobes, infanti-phobes, and voyeur-phobes.

Likewise, social taboos—renamed “phobias” by “progressives” and pagans when they enjoy the taboo acts—are not intrinsically bad. Every society has and needs taboos. Taboos are nothing more than volitional acts that society deems wrong and harmful. Neither “progressives” nor pagans seek to eradicate taboos, shame, exclusion, or marginalization. Rather, they seek to impose and enforce their views on who should be excluded or marginalized, and what should be deemed taboo and stigmatized.

No society will or should eradicate all taboos, stigmas, shame, or marginalization. Therefore, the questions every civilized or primitive society has to answer are, 1. On what basis will some members of society be marginalized, 2. What will marginalization look like, and 3. What volitional acts will be taboo and stigmatized.

The “trans” cult is a solipsistic cult in which the self determines—or imagines—the world, and nothing outside of or in conflict with this self-imagined world matters. This self-determined, imaginary world is also an anti-Christian world in which evil is deemed good and good evil. In this world, expressing biblical truth about sexuality is taboo, and theologically orthodox Christians will increasingly and brazenly be shamed and pushed to the margins of society where they will be denied their right to speak freely, assemble freely, and exercise freely their religion.

Don’t surrender to the morality-phobic monster that prowls around like a roaring lion, seeking someone to devour.