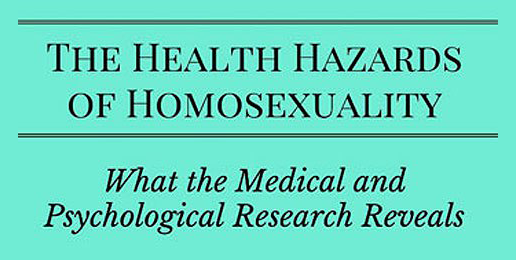 Last time I introduced the new and impressively researched book from MassResistance, which runs about 500 pages and adds another 100 pages of footnotes. These days when the meaning of the word “gay” has been radically changed by leftwing radicals, this book puts the lie to the idea that the word, as used, is a synonym of “happy.”

Social conservatives should buy a copy of this book so they can have the facts about “What the Medical and Psychological Research Reveals.”

In Tammy Bruce’s 2003 book The Death of Right and Wrong, Bruce, a self-described lesbian conservative, describes many of her fellow LGBTers with harsh language:

For people whose entire identity and reason to live is based in their sexuality, what do they need to do in order to fit comfortably into our society? They must work to sexualize every part of society…

From where does this madness spring? Why this compulsion to change our society’s culture to mirror the Left Elite’s own worldview? This pattern of the Left Elite’s projecting their issues onto society isn’t as odd as you may think.

It makes perfect sense, according to the most respected psychoanalysts of our age. Childhood trauma, stress disorders, and the resulting malignant narcissism all play a part in the Left’s victim mentality and in their effort, mostly subconscious, to shape our world to mirror their own damaged psyches.

In chapter 3 of the book, MassResistance surveys the mental health data and provides footnotes for the reader to learn more. “There is widespread agreement among researchers,” the chapter begins, “that the GLB population shows significantly higher incidence of mental health problems than heterosexuals.”

Those who read The Health Hazards of Homosexuality, may, like me, be surprised at the long list of physical ailments that are common in the GLB community — and yes, that includes lesbians. While the list is longer for men, bisexual men play the role of helping spread many of the diseases to women.

There were many other things I had been unaware of beforehand. Here are just a few of them:

“Bathhouses are accepted as ‘mainstream’ by homosexual organizations.” There is actually something called the North American Bathhouse Association. For some reason I was under the impression that their “disproportionate impact on the spread of disease” had led health organizations to shut them down.

If you’re still reading this article, I applaud your stamina. The good news is that we’re almost done. Just one more thing. From chapter 8:

Homosexuals would deny that any in their community engage in bestiality (intercourse with animals). If that is so, why is there a section discussing it at the pro-homosexual AIDS advice site, The Body? Why are bestiality videos sold at the International Mr. Leather event?

I’ll spare you the titles of the videos given as examples.

In this information age, it is astounding how much information remains mostly, and purposefully hidden. The politicized health organizations are as much to blame as the Leftist media and others advancing the LGBT agenda. This book can go a long way to helping solve this information problem — but only if social conservatives buy it and help spread the word.

People are “suffering unnecessarily,” as MassResistance’s executive director Brian Camenker writes in the Forward. The Introduction of the book states it clearly:

The mainstreaming of homosexuality is a serious threat to the public health and to the health of individuals caught up in the homosexual lifestyle.

The American public is not being told how dangerous homosexuality is to the physical and mental health of its practitioners, as well as to our larger society.

Click here to learn more about the book and to buy a copy.

The “LGB” and “T” Mobs Unleash the Morality-Phobic Monster

Identity Politics and Paraphilias: An Ugly Fight & Bestiality/Zoophilia
b
a
x
r