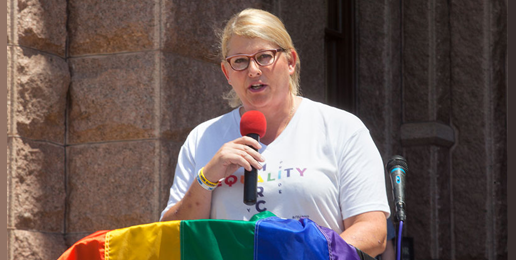 As many have heard, Planned Feticide (known euphemistically as Planned Parenthood) just gave the heave-ho to Dr. Leana Wen as its president. One of the reasons for the unceremonious dumping of Wen after only 8 months on the job is reportedly that she was disinclined to use politically correct language for people who pretend to be the sex they are not and never can be. Perhaps recently elected member of the Planned Parenthood National Board of Directors “Meghan” Stabler—who was elected six months after Wen’s appointment—had a little sumpin’ sumpin’ to do with that.

Stabler is, in reality, a man. He was born 56 years ago in England when his sex was correctly identified as male and he was named Mark. Stabler was once married to a woman and is the father of a 26-year-old daughter named Hannah (who is a lifestyle blogger in Austin, Texas). He and his former wife moved to the U.S. in 1990. In about 2002, he started cross-dressing and taking cross-sex hormones, after which he and his wife divorced. Then in 2007, he was castrated in an effort to masquerade convincingly as the woman he wishes he were.

Stabler’s professional life reflects his obsession with normalizing the science-denying “trans” ideology in which he lives and moves and has his being. According to the homosexual magazine The Advocate, Stabler, whom The Advocate named as one of the 2019 “Champions of Pride,” has spent “the last eight years on the Human Rights Campaign National Board of Directors.” The Human Rights Campaign is America’s leading homosexual and “trans” activist organization that in 2018 spent $910, 000 on lobbying.

And now Stabler sits on the board of directors of Planned Parenthood—a purported defender of women’s rights. Yep, nothing says “women’s rights” quite like a man invading their restrooms and locker rooms through an elaborate deception. I guess we shouldn’t be surprised that an organization that profits from the killing of thousands of girls every year would support the deception of girls and women in their private spaces.

But I thought men weren’t allowed to have an opinion on abortion. Weird.

Why might Planned Parenthood want a pretend-woman on its board? The answer might be that Planned Parenthood leaders have been watching those greenbacks fly out the door. Gotta replace lost lucre somehow. The “trans” cult came like an answer to unholy prayers offered to the gods of eros and mammon at just the right moment. Planned Parenthood now offers cross-sex hormones to anyone over 18—male or female—at 200 affiliates across the country, which represents a “150 percent increase from 2016.” Human sacrifice remains Planned Parenthood’s modus operandi.

The “trans” cult may do what “second wave” feminism couldn’t do: Turn me into a feminist.