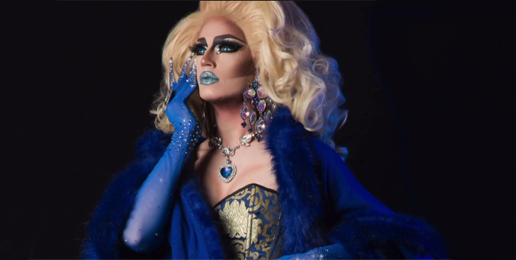 We’re foolish if we ignore what’s going on in schools in other states, because cancerous ideas metastasize especially among change-agents (aka ideological lemmings) who use their taxpayer-funded positions to indoctrinate children. And boy oh boy did change-agents in Rocky Top Middle School in Thornton, Colorado out-do themselves in mainlining cancer cells straight into the veins of other people’s children. On Friday, October 19, the school invited a homosexual man who makes a living as drag queen Jessica L’Whor (get it, Jessica the Whore) to come talk and read to children on career day. You remember career days, don’t you? That’s when schools used to bring in people to share details about their respectable careers in order to inform and perhaps inspire children to pursue a career about which they knew little or nothing.

On Monday, after the Friday event and after parents discovered what their children had been exposed to, principal Chelsea Behanna—who should lose her job—sent a remarkable letter home to parents in which she said the following:

Last Friday, Rocky Top hosted our 2nd Annual Rocky Top READS! event, and it was a great success because of so many people!… In addition to highlighting the connection between literacy and a successful career, this event reflected the diversity of our community. We had a broad range of careers represented—emergency responders, elected officials, clergy, research assistants, tradespeople, journalists, professional athletes and even a drag queen!… All families in our Grizzly community are receiving this letter because a handful of people have expressed concern over the presence of a drag queen in our middle school. Jessica, the drag queen, began her guest session with an explanation of her career—as did all other guests. She explained that she is a performer who, though a man, portrays a woman for her performances.  Students were completely engaged and asked lots of great questions.

I take responsibility for not notifying families ahead of time and apologize for any stress this has caused you and your child. This year we used the same process as last year, sharing the schedule of speakers with staff so they could prepare students and plan for questions, but realize we cannot make it the students’ responsibility to share that information at home. Moving forward, a prominent step in planning for next year will be to share the guest list for all families prior to the event. Should you feel like any of the sessions are not appropriate for your child, you’ll be welcome to notify us and we’ll make alternate arrangements for your child during that time.

Here are nine things to note in Behanna’s remarkable letter:

1.) In breathless excitement, Behanna included “drag queen” in a list of respectable careers, perhaps hoping their respectability would rub off on the “drag queen.”

2.) Behanna included the go-to jargon of Leftists everywhere: “diversity.” Just slap the word “diversity” on any immoral and disreputable activity, and voilà, it becomes immune from moral assessment. But rational people who know that diversity simply means difference or variety also know diversity is not intrinsically good. Not all ways of making a living are worthy of respect, and surely Behanna knows that. What her decision to invite the Whor reveals is that Behanna has concluded there’s nothing immoral about cross-dressing or homosexuality and that Behanna has chosen to make decisions about what other people’s children should be exposed to based on her personal moral code. Not very respectful of the diverse views of her diverse community.

3.) Next we come to the tactic used by public school administrators everywhere: isolate and marginalize those parents wise enough and brave enough to criticize the presumptuous decisions of change-agents. Behanna said, “All families” were receiving her letter because (and here it comes) “a handful of people expressed concern over the presence of a drag queen in our middle school.” You see that? “All families” had to be burdened with the letter because of the handful of community cranks. This is a slight modification of the expression often hissed at parents by fake-smiling, condescending administrators in mock shock: “Oh my, YOURS is the only complaint I’ve received!” It’s a common rhetorical trick used to ridicule critics into submission, but it’s an odd tactic for “progressives” who claim to care about minorities.

4.) Behanna said the Whor began her session by explaining her career—“as did all other guests.” Do parents really want to have their children educated by people who make no distinction between the career of drag queen and the career of emergency responder or pastor?

5.) Behanna highlights that children were “completely engaged and asked lots of great questions.” Is the degree of “engagement” of 12-year-olds the criterion Behanna uses to determine the soundness or appropriateness of a speaker? Yikes. And what constitutes a “great question” to Behanna?

7.) Behanna’s next statement is both infuriating and cunning. She said, “This year we used the same process as last year, sharing the schedule of speakers with staff so they could prepare students and plan for questions.” Here she implies that classroom discussions took place, discussions that prepared students for the speakers, but notice, she didn’t actually say such discussions took place. She said they shared the “schedule of speakers with staff so they could prepare students.” She did not say that any or all teachers shared anything with students or prepared them for a the appearance of a drag queen. If any teachers did “prepare” their students, Behanna didn’t share what specifically was they said. To make matters more outrageous, Behanna then tacitly passed the buck on to children for not sharing with their parents the content of any prep work about the drag queen that took place—prep work that Behanna never actually said took place.

8.) Throughout the letter, Behanna refers to the Whor by female pronouns even though Behanna acknowledged he is a man.

9.) Behanna did not commit to reevaluating the criteria she uses to determine the suitability of speakers, nor did she commit to not inviting drag queens in the future. Rather, she said that in the future she would “share the guest list” with parents in advance and allow them to opt their children out of any sessions they “feel” are inappropriate for their children. No recognition on Behanna’s part that openly homosexual drag queens are inappropriate speakers for all children.

WGN reported that the Whor “was invited by one of her fans, a Rocky Top student, to come to career day. All of the guests talked about their jobs and their connection to literacy.” This raises a number of questions: How does a middle school student become a fan of a drag queen? Did this student recommend the Whor or was it the student’s parents? To whom did the student or the student’s parental mouthpiece recommend the Whor as a speaker? Who specifically was involved in making the decision to invite the Whor and what criteria were used to evaluate his appropriateness? What is the connection between a career in cross-dressing in homosexual clubs and literacy? Oh, wait, silly me. Behanna said the Whor read a chapter in a book to kids.

Sexual anarchists are nothing if not tenacious. The Whor is no more daunted by the handful of critics than is Behanna. Fox News reported that, “[T]he negative feedback from some parents won’t stop her [sic] from speaking to kids, no matter the age.” The Whor said, “‘I want to go to more elementary schools because of this experience at Rocky Top.’”

Conservatives could learn a thing or two about tenacity in the face of opposition from these anarchists.