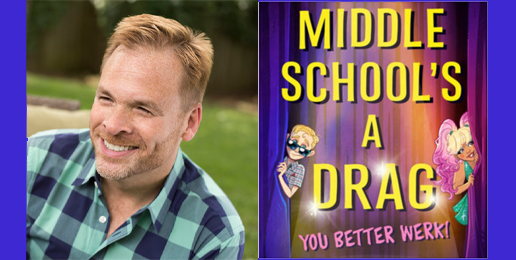 Still don’t believe sexual anarchists are coming for the hearts and minds of the nation’s children? Well, check out this just-released book published by G.P. Putnam’s Sons Books for Young Readers, an imprint of Penguin books, and geared toward children 10 and older: Middle School’s a Drag, You Better Werk Harder!, a book the publishers describe as a “hilarious, heartfelt story,” “full of laughs, sass, and hijinks” that “shows that with a little effort and a lot of love, anything is possible.”

Well, if you caught the allusion to “twerking” in the title, you may be a little less sanguine about children reading this hilarious, heartfelt story about love and possibility. For those who don’t know, “twerking”—as defined by the online Merriam-Webster Dictionary—is “sexually suggestive dancing characterized by rapid, repeated hip thrusts and shaking of the buttocks especially while squatting.”

Here’s more from the publisher:

In this heartfelt and hilarious new novel from Greg Howard, an enterprising boy starts his own junior talent agency and signs a thirteen-year-old aspiring drag queen as his first client.

Twelve-year-old Mikey Pruitt—president, founder, and CEO of Anything, Inc.–has always been an entrepreneur at heart. … Unfortunately, most of his ideas so far have failed. …  But Mikey is determined to keep at it.

It isn’t until kid drag queen Coco Caliente, Mistress of Madness and Mayhem (aka eighth grader Julian Vasquez) walks into his office … looking for an agent that Mikey thinks he’s finally found his million-dollar idea, and the Anything Talent and Pizzazz Agency is born!

Soon, Mikey has a whole roster of kid clients looking to hit it big or at least win the middle school talent show’s hundred-dollar prize. As newly out Mikey prepares Julian for the gig of a lifetime, he realizes there’s no rulebook for being gay—and if Julian can be openly gay at school, maybe Mikey can, too, and tell his crush, dreamy Colton Sanford, how he feels.

The author of this gut-busting novel about middle-school drag queens, Greg Howard, is a homosexual man in a pretend “marriage” to a third-grade teacher, who was inspired by the real-life child drag queen, the exploited “Desmond is Amazing” about whom I wrote over a year ago. Middle School’s a Drag, You Better Werk Harder! is being adapted for television by David Heyman, producer of all the Harry Potter films and Quentin Tarantino’s film Once Upon a Time … in Hollywood.

If this book isn’t obscene, then the word “obscene” is now meaningless.

The language is raunchy, the innuendo is frequent, and the energy is irrepressible. Hand this debut to readers tired of problem novels who are looking for a hilarious romp.

Author Greg Howard’s main characters are less like pitiable heroes who conquer evil and more like Mr. Hyde—the wicked side of Dr. Jekyll whose freely chosen actions resulted in his usurpation by Hyde:

I became, in my own person a creature eaten up and emptied by fever, languidly weak both in body and mind … a soul boiling with causeless hatreds, and a body that seemed not strong enough to contain the raging energies of life. …

The powers of Hyde seemed to have grown with the sickliness of Jekyll. … Jekyll … thought of Hyde, for all his energy of life, as of something not only hellish but inorganic. This was the shocking thing; that the slime of the pit seemed to utter cries and voices; that the amorphous dust gesticulated and sinned; that what was dead, and had no shape, should usurp the offices of life. And this again, that that insurgent horror was knit to him closer than a wife, closer than an eye; lay caged in his flesh, where he heard it mutter and felt it struggle to be born.

If we are going to allow homoeroticism to be depicted to children, then let the depiction reflect truth. If we love children—all children—then we will fight for truth.

In How to Read a Book, former University of Chicago professor, philosopher, author, and co-founder of the Great Books Foundation, Mortimer Adler warns,

The best protection against propaganda of any sort is the recognition of it for what it is. Only hidden and undetected oratory is really insidious. What reaches the heart without going through the mind is likely to bounce back and put the mind out of business. Propaganda taken in that way is like a drug you do not know you are swallowing. The effect is mysterious; you do not know afterwards why you feel or think the way you do.

In describing biblically Christian art, Calvin Seerveld offers a lens through which we should view all art, including literature that we serve to children on a faux-gilded plate:

Greg Howard produces anti-art for children—anti-art that the Devil loves.