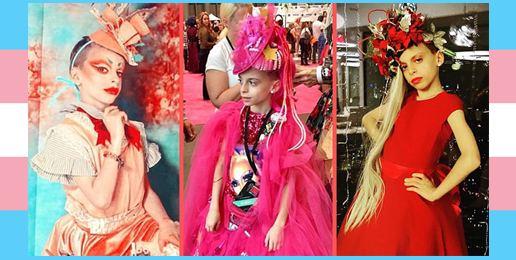 The Grotesque Indecency and Arrogance of the “Trans” Cult
Written By Laurie Higgins   |   01.02.19
PRINT

America has become a cesspool of fetid water in which we’re all boiling alive like those frogs we’ve heard so much about. How else to account for the silence of most Christian leaders on the “trans” ideology, including those who pontificate on social injustice while saying and doing virtually nothing as children are being chemically sterilized and surgically mutilated? How else to account for the absence of protests at the pestilent drag queen story hours for toddlers that pollute public libraries across the country? How else to account for an 11-year-old boy cavorting in drag on stage at “BROOKLYN’S PREMIER QUEER BAR” to the leers and cheers of adult homosexual men who threw dollar bills at him? And how else to account for the parents of this exploited child being allowed to retain custody of him?

Desmond Napoles, better known by his drag persona “Desmond is Amazing” appeared at the 3 Dollar Bill club in Brooklyn, sashaying about the homosexual/drag club stage all decked out like singer Gwen Stefani. I wrote this about Desmond a year ago:

Wendylou Napoles, another feckless perversion-facilitating mother, supports her 10-year-old son Desmond in his drag queen aspirations. His drag persona, “Desmond is Amazing,” first came to the public’s attention in 2015 when he marched—or rather “vogued” in the New York City “pride” parade to the cheers of the sick crowd. A video of his unfortunate performance went viral, and his career as an exploited child-transvestite took off.

Desmond now has an Instagram account on which he posts photos of himself in drag as well as a Facebook page that has no normal little boy photos. He recently announced his plans for a virtual club that will be a “positive, encouraging, and safe online community for all drag kids to connect with one another.” Does anyone believe a fifth-grader would on his own come up with such an idea?

In a June 2017 interview in Out Magazine about Desmond’s “premature fabulousness,” Desmond’s mom, who admits to taking him to the NYC pride parade every year since he was about “four or five” and to buying his drag outfits for him, said she has known for “a long time” that her 10-year-old son is homosexual.

In another Out Magazine interview in October 2017, Ms. Napoles claims Desmond had his first crush at age seven on Jinkx Monsoon, an adult drag queen he saw on RuPaul’s drag show….

Is that really what Desmond experienced? A crush on an adult? How many seven-year-old boys have crushes on adults?

Not quite a month ago, Desmond appeared on three episodes of the YouTube show called Pe-eew! which is described as a “stinky, sit-down comedy talk show satire” hosted by two homosexuals, one of whom is 51-year-old Michael Alig. Alig was the premier “club kid” in New York City in the 1980’s and 1990’s. In 2014, Alig was released from prison after serving 18 years for murdering his friend and drug dealer Andre “Angel” Melendez, leaving Melendez’ rotting body in his bathtub for 8 days, dismembering him, and throwing the dismembered body into the Hudson River….

In this Pe-eew! episode (click here), Alig and homosexual co-host Eric Glam ask Desmond about his pink lace and bejeweled hand mirror. Desmond describes it as his “Richie Rich” mirror, following which Alig and Glam start smirking and bantering about Richie Rich. No, not the Richie Rich a little boy should be talking about. They were talking about former club kid and fashion designer homosexual Richie Rich.

Wearing silver girl’s sandals and a tiara, Desmond appears in this video for Refinery 29, “a media and entertainment company that helps women see, feel, and claim their power,” to talk about his life philosophy and fashion.

Not so long ago, parents would likely have lost custody of their children for doing the things these mothers are doing. Today they’re celebrated by many on the Left. It’s hard to take seriously the moral outrage of Leftists over the abuse of adult women by adult men (#MeToo campaign) when they say nothing about this kind of egregious and very public abuse of children.

Many questions are raised but not explored by the explosion in the number of children who identify as “trans”:

In addition to devastating the hearts, minds, and bodies of children and adults, the “trans” toxin boiling us alive leaves a corrosive residue of overweening hubris. Those who identify as “trans” now feel entitled to bully others into submission. Like men who don evening gowns to conceal their sex, sexual anarchists conceal their tyrannical impulses beneath rhetoric about compassion, inclusivity, tolerance, equality, and justice. But make no mistake,  sexual revolutionaries are exploiting those appealing notions as weapons. Sexual revolutionaries use those noble ideals to confuse and intimidate the unpersuaded in order to silence the expression of views revolutionaries detest. And as conservatives acquiesce to every new initiative, capitulate to every rhetorical demand, and tolerate that which a decent society should oppose, the arrogance, intolerance, and sense of entitlement of “trans”-cultists grow.

Last week a grotesque display of arrogant entitlement took place in a GameStop store when a young clerk referred to a big burly man with a deep voice as “Sir,” following which the enraged burly-man set upon the young clerk with a volley of obscenities, issued a distinctly male taunt to “take it outside,” knocked down a store display, demanded the corporate number, and threatened to tattle on the young clerk to all “LGBTQ” organizations in the known world—all because of the clerk’s alleged offense of “misgendering” him.

But what the desperado furioso was really demanding was that the clerk mis-sex him. The enraged man in pink sneakers was demanding that the clerk use language that is appropriate only for a biological woman—which the brawny, brawling man clearly isn’t.

With cult-like fanaticism and tyrannical tactics, “trans”-cultists and their ideological allies now demand that all of society accept their arguable, subjective assumptions as gospel truth and kowtow to the real-world applications of those nonsensical assumptions:

The First Amendment is being dismantled bit by bit by men in dresses, aided and abetted by conservative cowardice.

Ironically, the temerity of “trans”-activists in exploiting and indoctrinating children, coercing speech, demanding entrée into opposite-sex private spaces, and shrieking obscenities at those who tacitly admit the emperor is wearing drag exposes the lie that the perverse “LGBTQQAP” ideology has anything to do with tolerance, autonomy, inclusivity, diversity, or choice.