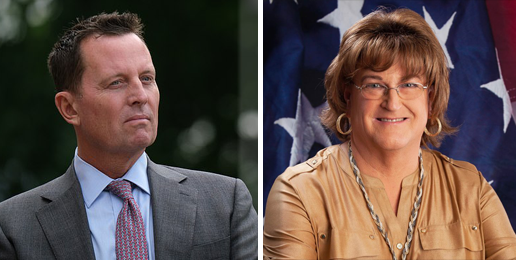 Last week I posted this on my personal Facebook page on which all posts are public:

Here’s why [homosexual] Richard Grenell is a disaster for the Republican Party. Republican cross-sex passer “Gina” Roberts—a biological man who tries to pass as a woman—tweeted about how “incredibly accepted” he felt at the Log Cabin Republican booth at CPAC. Richard Grenell retweeted Roberts’ tweet to which Lauren Witzke responded, “We’re celebrating mental illness now?”

Grenell than replied foolishly, “No. We are celebrating that God made everyone and people being respectful. Try it.”

We should treat all fellow humans with respect, but respect does not entail affirmation of delusional thinking, disordered desires, or immoral acts. And while God has made everyone, he does not make all of our desires and beliefs. The fall and Satan make us desire sinful things.

What the GOP doesn’t need are leaders like Grenell who don’t know truth.

To be clear, my post had nothing to do with the controversial Lauren Witzke who ran unsuccessfully against Chris Coons for a U.S. Senate seat in Delaware.

Rather, it was about Grenell’s unhelpful tweet that could be understood to mean, 1. that God created the desire of men to be women, or 2.  that we should celebrate cross-sex impersonation, or 3. that “being respectful” requires the GOP to affirm “trans”-cultic beliefs and practices.

Richard Grenell is seen here being sworn in as President Trump’s ambassador to Germany with his hand on a Bible held by his—Grenell’s—long-time romantic/erotic partner Matt Lashey.

Three days after my post, I received this Facebook message from “Gina” Roberts, the man about whom Grenell was tweeting. Roberts’ message to me kinda makes my point about the danger posed to the GOP by homosexuals and “trans”-cultists:

You are a piece of work. I love your obsession with the LGBT world. I think you need to expand your thinking. You have no idea what you are talking about. Hate is the pervue [sic] of our opponents, Republican [sic]are the party of freedom and acceptance. You might try it.

Now, on to my thoughts on Roberts’ feelings.

First, my alleged “obsession” with the “LGBT world” is a reaction to the obsession of homosexual activists and “trans”-cultists, of which Roberts is a member, to proselytize their ontological, teleological, epistemological, moral, and political views to children using government schools and public libraries, while trying to censor all dissenting views.

Second, Roberts engages in the same epithet-hurling that leftists and sexual libertines of all stripes engage in: He falsely accuses me of hating him. Having conservative beliefs on the nature and morality of biological sex-rejection or homosexuality does not constitute hatred of those who believe differently. Perhaps Mr. Roberts hates everyone who believes differently from him, but he ought not impute to others his modus operandi or habits of mind. Many people are fully capable of loving those who hold different beliefs. Most people in this wildly diverse world do it every day.

All people should love their neighbors, and they should hate sin. We should hate acts and ideas that harm children, adults, families, and societies. C.S. Lewis wrote that,

The little human animal will not at first have the right responses. It must be trained to feel pleasure, liking, disgust, and hatred at those things which really are pleasant, likeable, disgusting and hateful.

Third, even in a free country, “freedom” is not absolute. That’s why homosexual brothers who are in love are not free to marry legally. That’s why plural marriages are illegal. A healthy society constrains liberty when acts harm the public good.

Finally, as near as I can tell, Roberts’ claim that I “have no idea what” I’m talking about is based on the fact that I disagree with his beliefs—which as near as I can tell are based on his subjective feelings. If so, is it his argument that all behaviors impelled by powerful, unchosen, seemingly intractable feelings are always and necessarily moral and should be “accepted” by society? If so, yikes.

The GOP should no more welcome leaders who affirm homosexual acts, same-sex faux marriage, adoption by homosexuals, and cross-sex impersonation than it would welcome those who support open borders, higher taxes, Critical Race Theory, and reparations for non-slaves. What our leaders hold to be true about homosexuality and biological sex will eventually affect policies on those issues. And policies and laws related to homosexuality and cross-sex impersonation are not peripheral to the public good. They are central. In fact, they are far more important than, for example, tax rates. Our First Amendment protections are eroding because of the “LGB” and “T” ideologies—not because of tax rates.

As for Richard Grenell, he is now the Senior Advisor for National Security and Foreign Policy with Jay Sekulow’s American Center for Law and Justice.

Your support makes a difference!