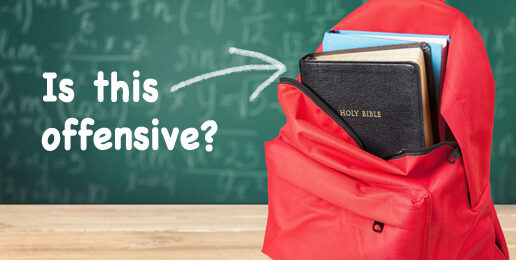 As incomprehensible to average Americans as it may seem, three stories about government school students facing disciplinary actions for expressing their Christian faith were featured in Christian media publications over the past few months:

Those are only three instances made public by legal groups representing the students who, their lawyers say, have had their First Amendment rights restricted in government schools.

The First Amendment of the U.S. Constitution says, “Congress shall make no law respecting an establishment of religion, or prohibiting the free exercise thereof; or abridging the freedom of speech, or of the press; or the right of the people peaceably to assemble, and to petition the government for a redress of grievances.”

While the First Amendment focuses on the U.S. Congress and what they cannot do, it asserts that public policies restricting religious practice or expression at lower levels are not acceptable, either.

The 14-year-old Florida student whose teacher ridiculed him for his faith experienced something no American should ever have to experience, his attorney Harmeet K. Dhillon said in a statement.

“It’s bad enough that the school has done nothing to stop the bullying from his peers, but have gone as far as joining in on targeting [the student] for simply practicing his faith. This blatant violation of his First Amendment rights is another example of how extreme so many in our education system have become,” Dhillon said, and why her law firm took on his case.

The American Center for Law and Justice (ACLJ), which took on the 14-year-old drama student’s case, described a similar legal scenario.

“This is what ‘wokeness’ has come to—shaming middle school students for expressing their joy in their personal relationship with Jesus Christ because it is considered ‘offensive,’” Christina Compagnone (Stierhoff) of the ACLJ wrote in April 2021. “This was a clear violation of this student’s First Amendment rights and an affront to the religious liberties rooted deeply in the history and culture of the United States.”

The U.S. Supreme Court dealt with the First Amendment rights of students five decades ago, in Tinker v. Des Moines Independent Community School District, 393 U.S. 503 (1969). In their ruling favoring the plaintiffs, the highest court in the land wrote:

In our system, state-operated schools may not be enclaves of totalitarianism. School officials do not possess absolute authority over their students. Students in school, as well as out of school, are “persons” under our Constitution. They are possessed of fundamental rights which the State must respect, just as they themselves must respect their obligations to the State. In our system, students may not be regarded as closed-circuit recipients of only that which the State chooses to communicate. They may not be confined to the expression of those sentiments that are officially approved. In the absence of a specific showing of constitutionally valid reasons to regulate their speech, students are entitled to freedom of expression of their views.

And while that’s a strong statement in favor of students’ rights to express their opinions, the question is whether the Court would hold a similar position in 2022, or would the Court decide that maintaining peace in a politically- and religiously-divided setting is the “greater good?”

A growing number of Christian parents are choosing home schools and private Christian schools rather than dealing with antagonistic settings and curriculum offered in state-operated schools.

As more and more cases like those hit Christian media headlines and eventually make it to dominant media, the more intense the issue will become and all the more urgent for American freedom-loving parents to defend future generations from anti-Christian sentiments within government schools.

Illinois Family Institute offers an array of resources on their website at illinoisfamily.org to help parents make crucial decisions about their children’s education.

Fran Eaton
Fran Eaton is a freelance writer living in DuPage County. She and her late husband Joe homeschooled their three children for 15 years, and she is now the proud grandmother of ten. Fran attends Village Bible Church in Naperville....
Full bio and more from Fran Eaton
Related Articles