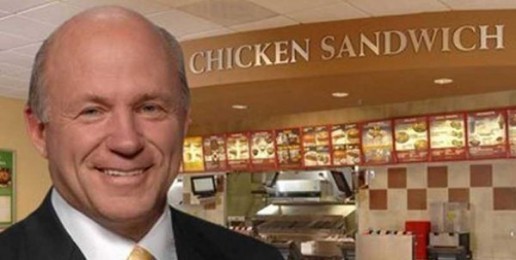 “Seems like not much has changed in the world of Chick-fil-A,” declared a Huffington Post article after Chick-fil-A President Dan Cathy, perhaps predictably, tweeted his opinion about the Supreme Court’s ruling on DOMA and Proposition 8. The ruling will extend federal recognition to same-sex marriages in the states where they are legal.

“Sad day for our nation; founding fathers would be ashamed of our gen. to abandon wisdom of the ages re: cornerstone of strong societies,” Cathy wrote on Wednesday, according to The Atlanta Journal-Constitution.

Apparently not much has changed in the social media world either, where anything short of full support of gay marriage is still “homophobic.” Huffington Post contrasted the “anti-gay” post with those who were “celebrating equality.” The response on Twitter was less forgiving, calling Cathy a bigot and hateful, with renewed decisions to avoid Chick-fil-A.

Cathy later deleted the tweet. In a statement, Chick-fil-A said, “Dan recognizes his views do not necessarily represent the views of all Chick-fil-A customers, restaurant owners, and employees, so he removed the tweet to eliminate any confusion.”

Cathy has become infamous for his public stance on gay marriage, which has caused controversy for the company in the past. Last year, Cathy told the Baptist Press that the company was “guilty as charged” for backing “the biblical definition of a family.” He drew even more fire for his comment that the nation was “inviting God’s judgment … when we shake our fist at him and say, ‘We know better than you as to what constitutes a marriage.’”

In response, public officials in Boston, Philadelphia, and Chicago told the company it was not welcome to open restaurants in their cities. But it didn’t hurt the company too badly—it apparently set a one-day sales record after its supporters held a “Chick-fil-A Appreciation Day” last year. Gay marriage supporters held a “Kiss In” at the restaurants to protest Cathy’s views.

Perhaps one tweet put it best: “Looks like Dan Cathy CEO of Chickfila didn’t learn his lesson the first time about putting his opinions out as a public business figure.”

It seems Cathy still can’t accept that if you’re a public figure, it’s best to support the agenda or keep your mouth shut.

Fomenting Racism in the 21st Century