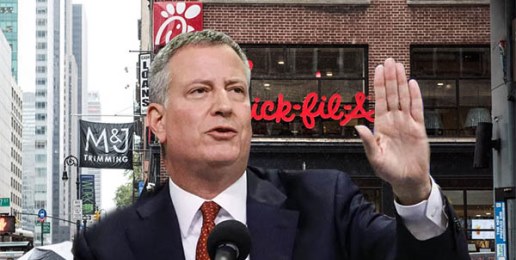 New York City Mayor Bill de Blasio is urging New Yorkers not to eat at Chick-fil-A because owner Dan Cathy believes that homoerotic acts are not moral and has donated money to organizations that share that belief. Although Mr. Cathy has donated money to charitable organizations that espouse the view that homoerotic acts are immoral and that marriage is an intrinsically male-female union, his beliefs affect neither whom Chick-fil-A franchises hire nor whom they serve.

Mr. Cathy’s beliefs on the moral status of homoerotic activity and the nature of marriage derive from his Christian faith. Both the Old and New Testaments teach clearly that homoerotic acts are immoral and that marriage is a male-female union, as does, by the way, the Quran. Therefore, it’s not just Mr. Cathy who holds those beliefs. It’s all theologically orthodox Christians, Orthodox Jews, and Muslims.

Does de Blasio seek to shut down every business in America whose owners are theologically orthodox Christians, Orthodox Jews, and Muslims? If so, would this goal comport with the free exercise of religion? Are these groups allowed to freely exercise their religion so long as they don’t own businesses?

What if a Christian believes that the only path to eternal life is through Jesus Christ? That would mean Christians think non-believers are destined for eternal damnation. Many Leftists erroneously think such a belief represents the desires of Christians. As a Leftist, de Blasio may think this Christian belief about salvation is downright hateful. Should those who believe that Jesus is the way, the truth and the life be allowed to own a business in America?

Do tell, Mayor de Blasio, which religious beliefs may people of faith hold and still own a business in America?

If you would like to send a message to the New York City mayor, fill out the webform on this website.  And above all, please vote with your wallets and continue to patronize Chick-fil-A restaurants.