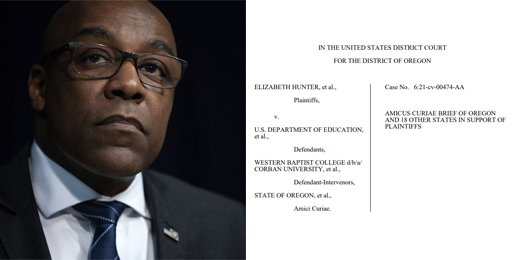 As Al Mohler, President of Southern Baptist Theological Seminary, put it, this lawsuit “is a deliberate effort by a major means of coercion to bring an end to institutions of Christian conviction, that operate as colleges and universities and seminaries.”

Although the case focuses on Christian colleges and universities, initially, the only defendant in the case was the Department of Education. By suing the Department of Education, the lawsuit would have been able to target religious institutions without giving them an opportunity to speak in their own defense. This was especially concerning given the federal government’s reluctance to come to the defense of religious freedom.

In June, the Department of Justice initially promised to defend the religious freedom of the schools in question but quickly walked that back when LGBT activists complained. Within 24-hours, the Department of Justice amended their filing to say that they would offer an “adequate” defense of religious freedom, in contrast with their earlier statement promising a “vigorous” defense. It also removed its initial statement that the Department of Education and religious colleges and universities “share the same ultimate objective, … namely, to uphold the Religious Exemption as it is currently applied.” Given the Justice Department’s unwillingness to commit to meaningful religious freedom protections, the importance of allowing the schools to step in and come to their own defense was clear.

Thankfully, the Council for Christian Colleges and Universities, as well as three Christian colleges represented by Alliance Defending Freedom have been allowed to intervene and will be representing the concerns of religious colleges and universities in the case.

For religious freedom to truly exist, there must be freedom not simply to believe something, but to live and act in accordance with those beliefs. That includes the freedom of religious people to establish educational institutions that teach and practice in accordance with their beliefs. Raoul and the other attorneys general filing this brief have a thin view of religious freedom that offers very little real protection to people of faith who want to live out what they believe.

Religious organizations have a right to maintain policies and teach in a manner that is consistent with their beliefs, and students have a right to pursue a religious education. If successful, this lawsuit would threaten that by forcing any college or seminary that accepts tuition grants, student loans, or any other federal financial assistance to embrace the LGBT agenda, regardless of their religious beliefs.

It is not pro-religious freedom to force religious beliefs to the margins of society and insist that people and organizations have a right to believe certain things only if they keep quiet and do not allow their beliefs to turn into practice. By joining this amicus brief, Rauol is pitting himself against the religious freedoms of Illinoisans and Americans.

A similar article was originally published by Minnesota Family Council.