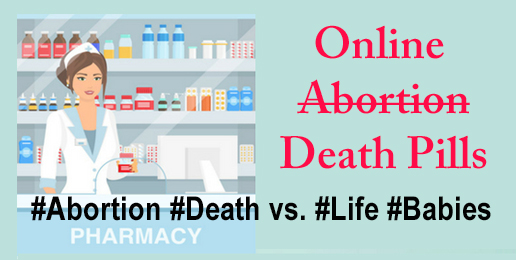 Abortion pills are becoming more common among women seeking to abort their offspring, and the availability of these pills online is growing, allowing women to avoid going to an abortion clinic entirely.

Numerous news outlets have reported on the efforts of Dutch physician Rebecca Gomperts to expand her 13-year-old internet abortion-pill business Women on Web into the U.S. Gomperts, who launched her U.S. push in April, has received awards from Planned Parenthood and various feminist groups and is also known for her environmental activism.

Reports in the mainstream media have portrayed Gomperts’ efforts as heroic or at least worthwhile, while the perspective of pro-life groups has been given only minimal attention. A story in the Atlantic noted that,

For American women who’ve wanted pills, though, there’s been one major problem: Women on Web wouldn’t ship to the United States. American women could (and do) instead search online for abortion pills, but some of the medicines and pharmacies they’ve found have been less than reliable. Now Women on Web’s founder, a doctor named Rebecca Gomperts, has launched a new service that she says is just as safe as Women on Web, and it does ship to the United States. The cost is $95, but the website says the service will try to help women who can’t pay.

Just like Women on Web, the new service, Aid Access, will screen women for their eligibility to take the pills—they should not be more than nine weeks pregnant—through an online process. (If the pills are taken later, they are less likely to work.) Gomperts will herself fill each woman’s prescription for misoprostol and mifepristone, which together are about 97 percent effective in causing an abortion within the first trimester and already account for a third of all abortions in the United States. She then sends the prescriptions to an Indian pharmacy she trusts, and it ships the pills to women at their homes in the United States.

The market for abortion pills and for buying them online is growing in the U.S. because of their low cost and convenience, because of tightening state restrictions on surgical abortions, and because of the belief that a Trump-era U.S. Supreme Court could overturn Roe v. Wade.

Gomperts was previously hesitant to sell the pills to women in the U.S. because of the strong pro-life movement here. She has established the new, separate service Aid Access so as not to jeopardize Women on Web. In an interview with Mother Jones, Gomperts characterized what she is doing as “humanitarian aid.”

The Food and Drug Administration (FDA) approved the use of abortion pills in 2000, but selling them over the internet through unregulated channels might violate U.S. laws and the FDA has said it is evaluating whether any laws are being broken. Americans United for Life told CNN that Gomperts’ push to sell pills in the U.S. is “reckless and irresponsible.”

Abortion clinics have been providing pills for women up to 10 weeks along in their pregnancies, so they can have what’s called a medical, or chemical, abortion. Mifepristone, also known as RU-486 or Mifeprex, cuts off nutrition to the baby growing in a mother’s womb. The mother then takes misoprostol, typically within 48 hours, which causes intense contractions. Abortion activists misleadingly characterize what happens next as a miscarriage to mask the deliberate taking of a life.

Many women now prefer the idea of having an abortion in the comfort of their own homes as opposed to undergoing a procedure at a clinic, which they consider more invasive and less private. But pro-life groups say a growing number of women are emotionally traumatized by the process, especially if they are not prepared for the possibility of seeing what is clearly a developing baby get expelled from their bodies.

According to LifeSiteNews, chemical abortions put women at a greater risk of being traumatized: “At home, a woman may actually see the remains of her baby, sometimes while alone and in great physical pain…. ‘Those who do see more [by using the abortion pill] have more nightmares, more trauma symptoms.’”

Al Mohler, president of the Southern Baptist Theological Seminary, said earlier this month, “It’s hard to imagine a society any more dangerous and any more deadly than a society that will kill unborn life in the womb by a pill.”

Mohler said Gomperts’ efforts to sell abortion pills online to women in the U.S. reflects “the desperation of the pro-abortion movement, so determined to make abortion available to as many as possible, as quickly as possible, in as uncomplicated a manner as possible, whether or not the law is on their side.”

Women having second thoughts after taking the first abortion pill, RU-486, can potentially get the effects reversed and continue their pregnancies, according to Heartbeat International. The success rate is 64 to 68 percent, according to the group’s Abortion Pill Reversal website. The website can be found at abortionpillreversal.com. There’s also a 24/7 helpline number, 877-558-0333.