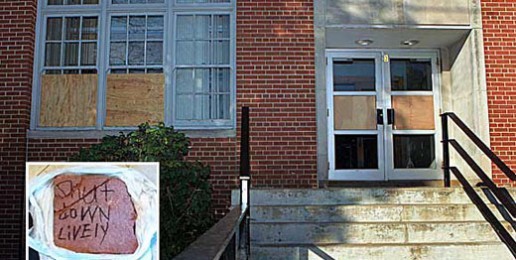 Pro-homosexual vandals recently attacked an Illinois Christian academy where Americans for Truth About Homosexuality (AFTAH) was holding a banquet to honor an evangelical Christian leader.

Anonymous activists have taken credit for throwing concrete bricks through windows and doors at Christian Liberty Academy in Arlington Heights to protest the banquet for the “homophobic hate group” and guest speaker Scott Lively, co-author of The Pink Swastika and founder of Watchmen on the Walls.

“I’m not surprised that they did this,” admits Liberty Counsel Action vice president Matt Barber. “This really amounts to an act of terrorism in that they threatened more violence if Dr. Lively and his speech went forward and if the Christian Liberty Academy did not disassociate from Americans for Truth About Homosexuality.”

But in the face of all opposition, AFTAH has remained steadfast in exposing the homosexual agenda throughout the country. Barber contends the attack should trigger an investigation on the basis of hate crimes laws. He also points out that homosexuals who demand tolerance are not willing to repay the favor to opponents as they try to shut down the Christian message about their lifestyle.

“We are going to speak God’s truth in love without fear of reprisal, or even in this case, without fear of violence,” the attorney assures. “So I have a message to the gay terrorists that perpetrated this crime: Your terrorist tactics have failed, and you will not succeed in silencing God’s truth.”

Meanwhile, the Christian Liberty Academy vandals stand by their actions and claim they threw concrete through the windows and doors to “show that there is a consequence for hatred and homophobia” in the community and to directly cause the October 15 event to be shut down. And since the event was not called off, the academy has been warned that it “will continue to be under constant attack.”

Even so, the incident is not being treated as a hate crime because Lively was apparently targeted for his views, not for any characteristic cited in the Illinois hate crime law, such as race, color, religion, gender, or sexual orientation.