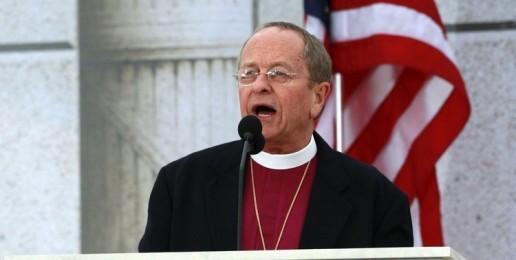 Obama’s Choice of Homosexual Bishop Gene Robinson to Pray at Inaugural Event is a Slap in the Face to Christians
01.12.09
PRINT

“President-elect Obama has signaled a tragic departure from America’s godly, Judeo-Christian heritage with his choice of a defiant homosexual activist, (Vicki) Gene Robinson, to recite a prayer at an official Inaugural event Sunday. Choosing Robinson — who supports homosexual ‘marriage’ and compares his agenda to mainstream sinful and changeable homosexual behavior to the noble Black civil rights struggle — is a sop to ‘gay’ activists who blasted Obama for picking evangelical pastor Rick Warren to say an Inauguration Day prayer.

“By choosing Robinson, who left his wife and family to embrace homosexuality – and who claims to revere the Bible as ‘holy and sacred’ while defying its clear teachings on sex and marriage – Barack Obama has given his first indication of how he could use the bully pulpit to undermine biblical values. (Obama promised homosexual activists that he would work to repeal the federal Defense of Marriage Act, which prevents states from being forced to recognize out-of-state same- sex ‘marriages.’ He pledged that as President he would advocate for homosexual adoption, and has distorted the Bible to justify his support for homosexual relationships.)

“Bishop Robinson is a radical sexual activist masquerading as a man of God. He is an affront to faithful Christians and religious defenders of morality everywhere. His selfish defense of sin literally has helped destroy and divide a denomination. Robinson – who was given the female name ‘Vicki’ at birth because his parents were hoping for a girl — has become a ‘gay’ celebrity: last year he gave a keynote speech praising the National Gay and Lesbian Task Force, a far-left, anti-Christian organization that annually honors sadomasochists with its ‘Leather Leadership Award.’

“Robinson personifies the prophet Isaiah’s admonition to Israel (Is. 5:20): “Woe to those who call evil good and good evil.” Christians and traditionalists – especially those who helped elect Obama – should urge him not to use his bully pulpit to undermine marriage and the biblical morals that helped build this blessed nation.”