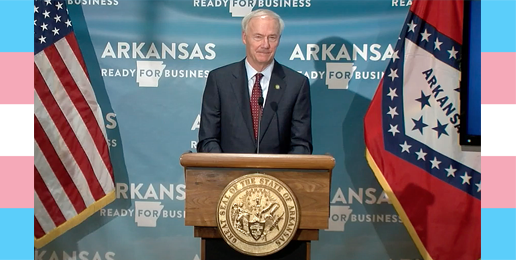 We learned this week that the love of money is the root of all evil. Well, we learned that in Scripture. This week purportedly conservative Christian governor of Arkansas Asa Hutchinson just reminded us of it when he sold out children to corporate interests.

For those still basking blithely in the afterglow of America’s once shining light or are socially distancing under a rock, the Arkansas legislature sent a bill to Hutchinson that would 1. prohibit doctors from the risky and experimental use of puberty-blockers and cross-sex hormones—some of the effects of which are permanent—for the treatment of gender dysphoria in minors, 2. prohibit surgeons from performing mutilating, irreversible cosmetic procedures on minors. and 3. prohibit the use of public funds, including Medicaid, for any of those barbaric, snake oil “treatments.”

Hutchinson might reflect for a moment on who exactly is cheering his decision. Hint: It’s not conservatives. Oh, no, it’s the “trans”-cult; the “entertainment” industry; the medical industrial complex; the propaganda arm of the Democrat Party (i.e., CNN, NBC, MSNBC, NYTimes, and Washington Post); soulless corporate America; BLM; the ACLU; and the Human Rights Campaign.

Word to Hutchinson: If all the good guys are criticizing you and all the bad guys are cheering you, maybe you made a disastrous decision.

On Tucker Carlson’s Fox News program, Hutchinson defended his decision by appealing to conservative small government commitments—the last refuge of conservative scoundrels who want to embrace “progressive” positions on “social issues.” He also said, the bill “goes too far” because it would stop minors who are already being experimented on from continuing with dangerous “treatments” to conceal their biological sex.

Of course, small or limited government doesn’t mean no government. Nor does it mean abandoning children to the “trans”-cult and the godless profiteers who line their pockets with the lucre gained by chemically sterilizing children and lopping off parts of their sexual anatomy.

Many people, stunned by Hutchinson’s decision and not duped by his small government rationalization, look to corporate pressure as the real reason for Hutchinson’s alignment with the dark side.

In March Hutchinson appeared on another Fox News show and was asked about corporate “pushback” against legislation that promotes sexual sanity. Hutchinson responded,

We’re the home of some major global corporations here in Arkansas, they’re certainly worried about the image of our state.

We are alarmed by the string of policy targeting LGBTQ people in Arkansas. This trend is harmful and sends the wrong message to those willing to invest in or visit our state. We support Gov. Asa Hutchinson’s recent veto of discriminatory policy and implore government, business and community leaders to consider the impact of existing and future policy that limits basic freedoms and does not promote inclusiveness in our communities and economy.

Our Founding Fathers would be surprised to learn that our “basic freedoms” include the freedom of children to stop puberty, take cross-sex hormones, and have healthy body parts cut off.

According to the Institute of Southern Studies,

Steuart Walton has been a generous donor to the Arkansas Republican Party as well as to Hutchinson’s campaign.

And Tucker Carlson reported that he “spoke with a source” who said that when the term-limited Hutchinson leaves office in 2022, “he would very much like a board seat” at Walmart.

There are some curious omissions in Hutchinson’s public statements on Fox News about the bill he vetoed.

Hutchinson didn’t address the shocking increase in the number of adolescent girls now identifying as boys. Before the “trans”-cult stopped its slow titration of their ideological poison into the body politic, gender dysphoria affected a minuscule portion of the population and affected mostly boys, beginning between the ages of 3-5. Upwards of 80 percent of those boys eventually desisted from identifying as girls.

Now with the secular world promoting opposite-sex impersonation, particularly via social media, there is an explosion in the number of adolescent girls and young women suddenly identifying as male. As psychologists and sociologists know, girls are much more vulnerable to social contagions, like anorexia, bulimia, cutting, and now cross-sex identification.

Hutchinson didn’t mention the politicization of the professional medical and mental health communities. For example, while “trans”-cultists and their ideological allies like to tout the American Academy of Pediatrics’ endorsement of the medical “transing” of children, they don’t like to mention that the pro-“transing” policy was created and voted on by fewer than 50 members of the now-67,000-member academy.

Hutchinson didn’t mention the increasing number of young women who “detransition” and deeply regret having taken testosterone and/or having had their healthy breasts cut off. These young women with permanently male voices and scarred chests that will never nurse a baby feel betrayed by the medical and mental health communities.

Hutchinson didn’t talk about the health risks from the experimental use of puberty blockers and hormones never tested for long-term cross-sex use, risks that include infertility; liver dysfunction; coronary artery disease; cancer; strokes; osteoporosis; and the development of gallstones, blood clots, hypertension, and pituitary gland tumors.

Hutchinson never talked about the ethics of turning healthy children into lifelong medical patients (You know who likes that? Endocrinologists and pharmaceutical companies, that’s who).

Someone should ask Hutchinson whether his limited government principles would lead him to oppose bans on limb amputations for those with Body Integrity Identity Disorder—a condition in which the sufferer experiences a mismatch between his bodily wholeness and his internal sense of himself as an amputee.

And what about Female Genital Mutilation (FGM), which was banned by the Stop FGM Act of 2020 and signed into law by former President Donald Trump? Would small government Hutchinson oppose a ban on the excision of female genitalia from a 14-year-old girl who, for religious or cultural reasons, wants her genitalia mutilated?

Since girls as young as 13 are having double mastectomies, a 2015 article by Derrick Diaz and published in the DePaul University Journal of Healthcare Law about cosmetic surgery for minors may offer some helpful insights:

Minors should not have access to cosmetic surgery unless found by a court to be medically necessary. … [I]f medical necessity has not been shown, then the service should be prohibited the same as any regulated service or product prohibited to minors.

[A] medical necessity determination can be made through a four-pronged analysis. First, does the impairment hinder a minor’s normal physical function; and, is the proposed surgery intended to treat a present or future clinically verifiable disease, deformity, or injury? Second, is the physical anomaly (1) objectively tangible, and (2) unusual or relatively common? Third, what is the state of the minor applicant’s psychological health? Fourth, would a reasonable minor in the applicant’s position be hindered from normal functioning by the condition (e.g., avoiding normal childhood/adolescent activities)?

[R]egardless of whether continued [legislative] noninterference is sound policy generally speaking, it is absolutely not so with regard to minors, as states have statutory mandates to protect their health and welfare. When it comes to cosmetic surgery on minors, states must have an intervening hand in preventing the potentially harmful effects of caveat emptor.

“Trans”-cultists and their allies try to get around this position by arguing that amputating the healthy, natural breasts of gender-dysphoric minor girls is “medically necessary.” But it’s not, and leftists have no conclusive, researched-based proof that it is.

On March 30, just days before his surprising veto, Hutchinson met with two “trans”-cultists—both men who pretend to be women, including “Evelyn” Rios Stafford, a justice of the peace in Arkansas, who pleaded with Hutchinson to veto the bill.

Did Hutchinson talk to any parents of teen daughters who suddenly started identifying as boys?

Did he talk to any young “detransitioned” women who grieve over their damaged bodies and the betrayal of adults who didn’t stop them?

Did he talk to any of the members of the American College of Pediatricians who oppose experimentation on the healthy bodies of children?

Did he consult with Abigail Shrier, the Wall Street Journal writer who wrote the book Irreversible Damage about the harm being done to adolescent girls?

Has he read any of the articles by historically leftist Jennifer Bilek who has been exposing the “money behind the rapidly growing juggernaut of transgenderism in American culture and beyond,” which she argues, “all leads back to the pharmaceutical and tech giants that now interface with LGBT NGOs which are driving the normalization of a biology-denying ideology.”

There is some good news emerging from Arkansas. The Arkansas legislature overrode Hutchinson’s unconscionable veto.

If Hutchinson’s relationship with God and truth are his first priorities—which they should be—then he should publicly confess his sinful decision and repent. Something tells me, however, that confession and repentance aren’t on his agenda.

Take ACTION: Click HERE to send a message to Gov. Hutchinson via his official webpage. You can also call the governor’s office during normal business hours to give him and his administration feedback: (501) 682-2345

If Leftists Ran the Zoo, Dr. Seuss Would Be Caged