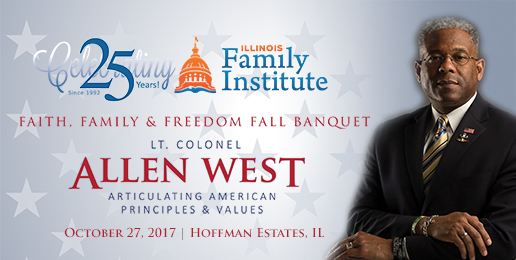 In an interview posted at the Accuracy in Media website, Lt. Colonel Allen West delivers what conservatives have come to expect from him since his arrival on the national political scene back in 2010 when he was elected to Congress from Florida.

We are thrilled to announce that Lt. Colonel Allen West (Ret.) will be giving the keynote address at IFI’s 2017 Family and Freedom Fall Banquet. As an outspoken advocate for the family and freedom, West is becoming known as one of the great conservative spokespersons of our time, and for good reason.

West firmly believes inspiring hope for this generation and those to come is critical to our nation’s future. He is an author and was a conservative leader in Congress. Currently he contributes to Fox News, works with the London Center for Policy Research, writes for various media outlets and is the president of the National Center for Policy Analysis, a public policy research organization.

Whether the topic is military readiness (“people sittin’ around at a desk pushin’ pencils don’t protect the nation”), or education (“the money should follow the child”), or the political swamp that is Washington, D.C. (“they chase the news cycle…sooner or later you gotta have an adult in the room that does not chase the news cycle”), Colonel West’s delivery is that of a decorated military veteran impatient with those who are “worried about political gimmicks.”

Earlier this year in an op ed titled, “The Grand Delusion of the Progressive Left,” West wrote that one “case of delusion was to try and make the American people believe that Keynesian economic policy, tax and spend, was still viable.”

Obama in his eight years focused more on wealth redistribution, you know, we all do better when we “spread the wealth around.” Furthermore, Obama made the seminal statement which presented a window into the mindset of the progressive left when he stated, “if you own a business, you didn’t build that.” There could be no more disrespectful, delusional, assertion directed towards the hard working American and their indomitable entrepreneurial spirit.

Obama and his disciples of economic disaster failed to grasp the concept that economic growth emanates not from Washington DC, but rather from the policies that unleash American investment, ingenuity, and innovation…along with production and manufacturing.

Days before Donald Trump was inaugurated, West wrote about “The Future of Conservatism in America.” He emphasized the need to get capital investment into economically depressed urban areas. Also needed are policies that will strengthen the traditional two parent home, especially in the black community which has fallen from almost 77%, prior to Johnson’s policies, to now 24%”:

What policies will give parents better educational opportunities, choice, for their children, not relegating them to failing government schools? Interesting, Barack Obama canceled the DC school voucher program, yet dispatched his kids to the prestigious Sidwell Friends School. For progressive socialism, it is about do as we say, not as we do.

What policies will create a safe environment for all Americans reestablishing the rule of law and order in our communities? The travesty that is Chicago must end, and sadly it is a cancer that has metastasized all over our Nation.

Conservatism is the answer, whereby progressive socialism, totally emotional based, has only served to exacerbate these issues and make them worse. And in response to the failures, it becomes a game of seeking blame, not one of self-reflection, you know, it is the fault of Fox News and the Russians.

“I was born and raised in the historic inner city Atlanta neighborhood called the Old Fourth Ward,” West writes, and notes that his parents were registered Democrats, but that they “inculcated in me these foundational conservative values — faith, family, individual responsibility, advancement through education, and service to the Nation.”

“I was not just blessed to have two superb parents,” West writes, “but parents who were American Patriots.”

SAVE THE DATE: Friday, October 27, 2017 at The Stonegate in Hoffman Estates.

Our Private Reception begins at 6:00 PM and costs $150.00 per person; which includes hors d’oeuvres, your picture with Col. West, a signed book and the main banquet.

Reserve your tickets online today or call the IFI office (708) 781-9328 to or click HERE to make your reservations.