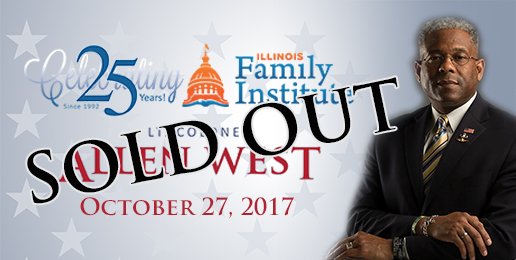 Join hundreds of pro-family warriors for the Annual Illinois Family Institute Faith, Family and Freedom Fall Banquet with Lt. Col. Allen West —  one of the great conservative spokespersons of our time.

He firmly believes inspiring hope for this generation and those to come is critical to our nation’s future. He is a decorated veteran, an author, and was a conservative leader in Congress. Currently he contributes to Fox News, works with the London Center for Policy Research, writes for various media outlets and is the President of the National Center for Policy Analysis, a public policy research organization.

Lt. Col. Allen West served 22 year career in the United States Army, and was deployed in several combat zones: in Operation Desert Storm, in Operation Iraqi Freedom, where he was a Battalion Commander in the Army’s 4th Infantry Division, and later in Afghanistan. He received many honors including a Bronze Star, three Meritorious Service Medals, three Army Commendation Medals and a Valorous Unit Award. In 2010, Allen was honored to continue his oath of service to his country when he was elected to the United States Congress, representing Florida’s 22nd District. He remains an outspoken advocate for the family and freedom.

Tickets Are Sold Out!