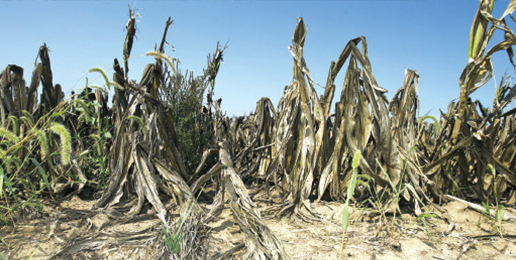 Global warming alarmists and their media allies launched a new scare last week, claiming that global warming is causing crop failures and food shortages around the globe.  In one of their biggest whoppers ever, the media are claiming that global warming has displaced “millions” of farmers in India and is causing – or will soon cause – similar devastation to farmers and crops in Bangladesh, Syria, and Honduras.  Objective evidence, however, decimates the assertion and shows that crop yields continue to set annual records as growing seasons lengthen, frost events become less frequent, soil moisture improves, and more atmospheric carbon dioxide fertilizes crops and plant life.

A January 10 Google News search for “global warming” listed near the top of its search results an article titled “How soon will climate change force you to move?” by an outlet called Fast Company.  Among other sensationalist climate claims, the article makes the claims listed above about global warming, crop failures, and resulting forced migration.  Fast Company, as it turns out, is trying to pull a fast one on you.

It is true that waxing and waning food production has been one of the most powerful components in the rise and fall of civilizations.  At Katowice, Poland, during the United Nations COP24 climate meetings in November 2018, Heartland Institute senior fellow Dennis Avery powerfully showed that throughout history, periods of increased crop yields have led to rising civilizations and expanding human populations.  Conversely, periods of declining crop yields triggered the fall of civilizations and led to famine, death, and contracting human populations.

Importantly, Avery showed that periods of global warmth stimulated the increased crop yields that led to expanding human populations.  Periods of global cooling repressed crop yields and led to misery, death, and contracting human populations.  The question is, has anything changed such that our modest present warming is causing declining crop production and resulting catastrophes?

Let’s first examine the claims regarding India.  Fast Company claims that “drought in some areas has forced millions of farmers to move.” For support, the article cites a Reuters article from July 2018 that interviews a failed farmer from India’s Madhya Pradesh state claiming that global warming and poor rainfall caused his failure as a farmer and his relocation to metropolitan New Delhi.  Poor rainfall “has caused repeated and widespread crop failures,” Reuters claims.  In summary, Fast Company cites another news organization’s profile of a failed farmer to support its alarmist climate assertions.

However, crop data from India eviscerate the claim that global warming, through drought or any other mechanism, is causing rampant crop failure in India.  The Indian government reports that Indian farmers produced a record amount of food grains in 2017-2018, topping the previous record that was set in 2016-2017.  “The year 2017-18 had, in fact, witnessed record production of all major crops like Rice (112.91 MT), wheat (99.70 MT), coarse cereals (46.99 MT) and pulses (25.23 MT),” the Times of India reported, citing official government data.

The Fast Company and Reuters articles are not outliers.  Global warming activists in the establishment media are always looking to find and interview somebody who blames his own personal shortcomings and misfortune on global warming.  But if you are a farmer in India, and you are a failure at your craft, you are the exception rather than the rule.  The objective data show, without any room for debate, that crop production continues to improve and set records nearly every year as our modest global warming continues.

Perhaps Fast Company’s discredited claims about global warming, drought, and crop failures in India are an isolated error, and the article is correct about its claims regarding other countries and regions.  Actually, no.

According to agricultural economists at the World Bank, as reported by CEIC Data, Bangladesh enjoyed record crop production in 2016, the last year for which data are available.  The 2016 record beat out the previous record year, 2014, and was preceded by the third highest production year, 2015.  Do you see a pattern here?  Crop production in Bangladesh is 33 percent higher than it was merely a decade ago.  According to a World Bank report accompanying the 2016 data, “Bangladesh’s rural economy, and specifically agriculture, have been powerful drivers of poverty reduction in Bangladesh since 2000.”

How about Honduras?  The International Food Policy Research Institute, citing official government data, documents that in 2016 – the most recent year for which there are data – Honduras achieved record production for each of its three staple food crops.  Honduran farmers produce record amounts of rice, wheat, and maize.  The 2016 record beat the previous record, set in 2015.  The next most productive crop year was 2014, followed by 2013.  Moreover, Coffee Bureau Intelligence reports that coffee-drinkers and coffee farmers also have reason to rejoice – as Honduran coffee production is believed to have set new records in 2018.  “Since 2014-2015, Honduras coffee production has increased by more than 12% per year,” Coffee Bureau Intelligence reports.

Fast Company cites four specific nations in support of its narrative that global warming is causing rampant crop failures, which in turn is causing mass migration.  Objective data show, beyond dispute, that Fast Company’s claims are flat-out wrong.  But in today’s agenda-driven media climate, don’t expect Fast Company, other media outlets, or Google News to post any corrections to the false reporting.

This article was originally presented on americanthinker.com