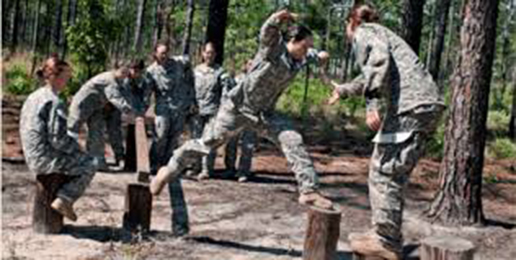 Modern people have a penchant for denying obvious things. Dysfunctional politics and political correctness have brought us to the point of potentially approving women’s inclusion in a military draft. The Senate Armed Services Committee recently entertained arguments in favor of requiring women to register for the selective service, and three candidates endorsed the plan in New Hampshire’s Republican debate. The trickle is turning into a stampede. Suddenly political correctness requires that we all agree that girls can fight just as well as boys.

The problem is that it’s just not true. We need to return to some basic Aristotelian principles in order to explain why drafting women would be both imprudent and unjust.

From a political standpoint, it’s easy to understand why Marco Rubio, Jeb Bush, and Chris Christie were all prepared to agree that women should register for the selective service. (U.S. Senator Mike Lee is pushing legislation to block the drafting of women, which has won support from Rubio and from Ted Cruz.) Somewhat farcically, all three candidates treated selective service registration as a wonderful new “opportunity” for women. That’s silly; the system exists to enable conscription in a time of extreme need. Women already have the opportunity to enlist in the military if they meet the relevant requirements.

Rubio specified that most likely a draft would apply only to women who met the physical requirements. But this would be a foolish policy in an emergency scenario. If you desperately need a large number of soldiers in a hurry, is it sensible to start screening populations of people that will mostly be unfit for the job? Should children and retirees also be included, in case a few turn out to be suitable for active service? This is nonsense. Every society in history has built its armies primarily of young men, for an excellent reason: They are overwhelmingly the most fit for the job.

If the Republican candidates were thinking clearly, they would be racing to specify that they support drafting women only to non-combat roles. This is a more sane position, modeled on the example of other nations (such as Israel) that use female conscripts primarily in supporting roles (as medics, logistical support, etc.). Considering that a draft would only be implemented in a time of extreme need, asking unattached young women to serve their country in these capacities could be reasonable. Demanding that they serve as infantry would not be.

The Collapse of Gender Sanity

It’s disconcerting to see even Republicans sanctioning this kind of foolishness, but there may be a silver lining here. There is value to discussing this issue at a moment when we desperately need a starting point for a more reasonable conversation about sex and gender. Sending thousands of young women to die in battle would be morally monstrous, but luckily, we are not currently threatened with a draft. Instead we are facing a near-total collapse of gender sanity.

With schools banning the concepts of “boyhood” and “girlhood,” single-sex restrooms being treated as an affront, and even the Olympics allowing anatomical males to compete in women’s events, American gender politics has reached freakish levels of absurdity. If there is any chance of returning to sanity, our understanding of gender will need to be rooted in reflections on something objective and measurable: the body.

Americans have been suspicious of stark gender claims for a long time, and in some cases this is actually reasonable. Do boys really excel in math and science? Are girls really more nurturing or “emotionally intelligent”? These stereotypes are not groundless, but it may not be appropriate or necessary to assert them too forcefully. Boys and girls are indeed different in certain respects, including in how their brains develop. Nevertheless some boys are well attuned to emotion, while some girls may be assertive, independent, or analytical. Gender skeptics may reasonably ask: Isn’t it time we stopped defining people by dated stereotypes and allowed them to prove for themselves what they can do?

Much of the public finds these arguments persuasive, which is why politicians are happy to echo them—even on the political right. Most of us don’t mind when increased gender-role flexibility means a girl can become a sportswriter or an electrical engineer. In our time, however, the lines of reasonableness clearly have been crossed. Given that so many of our compatriots have rejected tradition as offensive and anachronistic, what other grounds are there to restore some sort of natural order?

The case of women in the draft may fit this purpose, because the objections are so obvious and so rooted in physiology. One can understandably argue that stereotypes play a role in holding women back from, say, achievements in the STEM fields. But military service is an entirely different animal. By significant margins, women are physically weaker and slower and have poorer reflexes than men. On the battlefield, these shortcomings make a literally life-or-death difference.

The Marine Corps commissioned a study that found that their strongest female recruits (top 25%) were about on par with the weakest male recruits (bottom 25%). Women undergoing entry-level marine training were an appalling six times more likely to suffer injury, including especially high rates of musculoskeletal injuries due to movement with heavy loads. (Even women who seem spectacularly fit may still sustain pelvic fractures from long marches with a standard military pack.) Mixed-gender units were slower and less lethal, and sustained more casualties.

In short, women don’t make very good soldiers. The exceptions are few and don’t stand out much by elite military standards. Women can certainly be courageous, patriotic, and self-sacrificing, but the female body was not built for combat.

Suppose you consider chivalry outdated or even sexist. Perhaps you scoff at the idea that all-male units will have a stronger sense of fraternity, and you’re unworried about the possibility of romantic entanglement. But have you considered the strong evidence that female conscripts would be less effective in achieving military objectives, but far more likely to die trying? Are you moved by the consideration that under-qualified soldiers are a danger to everyone in their unit? Drafting women to combat roles just doesn’t make sense.

You may reply, won’t girls feel bad if we tell them they are weak, slow, and generally unimposing in combat? Isn’t this tantamount to saying that women are physically inferior?

Not at all, if you put the claims in a larger context. Women have bodies of amazing power: Nothing can compare to holding a newborn and realizing with awe, “My body built that.” It’s a remarkable feat that men can never simulate.

Women are physiologically awe-inspiring, but not in a way suited for soldiering. Their energies go towards something else; indeed, the female reproductive system is far more “expensive” in terms of invested energy, whether or not a woman ever bears a child.

Might these physiological differences tell us anything about what a flourishing life should look like, for men or women? Modern feminists would say “no”; that kind of reasoning is angrily rejected as “biological determinism.” Gloria Steinem famously declared, “Everybody with a womb doesn’t have to have a child any more than everybody with vocal cords has to be an opera singer.”

Steinem’s comment is a good illustration of how far feminist thinking is removed from reality. Singing opera is a highly rarified use of a part of the anatomy that most of us use all the time, whereas wombs are useful for gestating babies and really nothing else. Still, feminists are right to object against any claim that a person who is physically suited to X must be restrictively mandated against doing anything besides X. But does anyone make this claim? It is possible to find moral significance in the body without engaging in hackneyed reductionism.

Women should not be commodified as baby-builders, any more than men should be commodified as body-builders. It turns out, though, that a flight from “biological determinism” sometimes ends in a kind of biological escapism. If we insist that our physiology has no moral significance, we may find ourselves desperately trying to hide from the obvious consequences of refusing to be what, in fact, we are.

We see manifold evidence of this escapism in modern life. Schools tie themselves into knots trying to prevent boys from doing what boys of virtually every culture like to do: wrestle, compete, and play warlike games. Boys are not suited to sitting in chairs all day long: The lack of movement in school is a huge problem for them that seems to be undercutting their scholastic achievement. Later in life, if they enlist in the military, the physical standards they are expected to meet will probably have been lowered to make it more possible for women to compete. Let’s have no overt expressions of masculinity in the military, please! It makes the ladies feel bad.

In a different way, girls are taught to suppress their most uniquely feminine characteristics. Progressive liberals have poured enormous energy into ensuring that girls can suppress their reproductive potentialities without cost, without judgment, and preferably as early as possible. Obsessed with lifting the “burden” of reproduction, these liberals lose any sense of healthy respect for motherhood or new life. They regularly reveal their disdain for pregnancy, children, and families, as we saw when NARAL activists threw themselves into a frenzy of indignation over a Super Bowl commercial that presented unborn children as humans.

Virtually no one would argue that either men or women should be enslaved to their physiology. But should we see it as an awkward physiological accident that men have (larger) biceps, and women the power to bring forth new life? Surely it’s more reasonable to incorporate these features into a complete and fully humane understanding of manhood and womanhood, in a way that gives meaning and social purpose to both.

What this means is that both boys and girls should be raised to embrace the unique potentialities of their bodies. Not every boy will grow up to be a soldier, but every boy can be taught to channel his natural competitiveness and aggression towards good. Young men should view themselves as protectors,ready to do what is needed to prevent the wicked from victimizing the innocent.

In a similar vein, not every girl will become a mother. Most will, but a woman who is unafraid of her physiology will find a healthy outlet for her life-giving impulses whether or not she literally bears a child. That doesn’t mean she can’t also (if she wants) learn to write software, but it does mean that she should expect her contribution to society to take the form of giving life, not taking it.

Again and again, the progressive left has proven that prudent living, once neglected, is soon spurned. Drafting women would be a particularly tragic illustration of this point: Even women who don’t want to serve could be forced to throw their lives away in a desperate effort to act like men. Might we use this moment to walk the conversation back in the other direction? Our military needs at the moment are happily not so dire, but in the war against nature and common sense, the enemy seems to be winning. Let’s step up our recruitment efforts.

Rachel Lu teaches philosophy at the University of St. Thomas in St. Paul, Minnesota where she lives with her husband and three boys. Dr. Lu earned her Ph.D. in philosophy at Cornell University.

This article was originally posted on ThePublicDiscourse.com.

Is the GOP Suicidal?
b
a
x
r