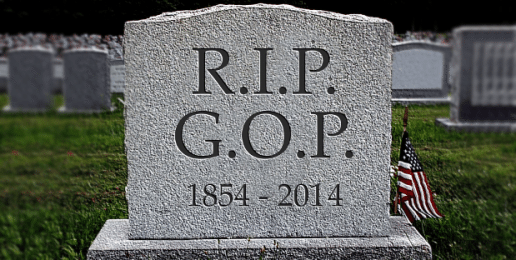 Leave it to the Republican Party to snatch defeat from the jaws of victory.

While nearly every poll definitively affirms that Democrats are in deep doo-doo come November, and as leftist talking heads like Chris Matthews have already conceded a likelihood that Republicans will take the U.S. Senate in the 2014 mid-term elections, many of the GOP’s highest profile personalities obtusely refuse to take yes for an answer. They’re evidently hell-bent on disenfranchising the party’s pejoratively tagged “social issues” majority.

From mealy mouthed moderate establishment-types like Chris Christie, to dovish libertine libertarians like Rand Paul, it seems a majority of the GOP rock stars are scared gutless to set a single yellow-nailed pinky toe on the fevered culture war battlefield. They say it’s time to raise the white flag on traditional values.

Guys, I’m here to tell you, the “social issues” aren’t going away. But keep up this fatalistic nonsense and the GOP’s Christian-conservative base just might. Morality-minded Americans are sick of it, and we will choose fidelity to principle over surrender to ill-perceived “pragmatism” every time.

Take presidential wannabe Rand Paul. This guy, who, by all appearances, was shaping up to be a thoroughbred in the 2016 primary horserace, may have just snapped a leg before the gates have even chimed open.

In a recent interview with the uber-liberal online rag, Vocative.com, Paul could hardly wait to take a matchstick to the official Republican Party “social issues” platform (i.e., the sanctity of marriage, natural human sexuality and morality, ending the abortion holocaust, religious liberty, the Second Amendment and the like.)

In other words, the Republican Party must become a wussified version of the Democratic Party.

Rand, Rand, Rand. This is the same failed, tired, reach-out-to-the-needy-independents strategy that brought us Presidents Dole, McCain and Romney. What is it about the GOP that has it constantly biting the hand that feeds it, while begging for a little scratch-behind-the-ear action from the fickle fingers of “independent” indifference?

There’s an interesting aside to Paul’s Vocative.com interview. My friend and nationally syndicated talk radio host Steve Deace made an interesting point in a recent email.

Can you imagine if Obama, or any national Democrat figure for that matter, gave an interview on public policy to a website that produces such content? Every conservative group in the country would be decrying how this is more evidence of America’s moral decline.

It’s also evidence, frankly, of the GOP’s moral decline and loss of its historical moorings, courage and resolve to stand firm on the transcendent, non-negotiable issues of life, liberty and the natural family, marriage and human sexuality.

If the big ol’ dumb elephant continues on this ill-fated trajectory, I can guarantee that the Christian-conservative base will abandon it, as it has abandoned us. Although we’d rather take the Ronald Reagan approach and reform the party from within, I can promise you that we will, if that becomes a lost cause, form a new, principled, conservative “values voters” third party.

If that happens, Democrats will rule the roost indefinitely.

Now that is scary.

In his email, Deace offered some wise counsel to Rand Paul and others who are squeamish on the “social issues.”

“Here’s what a libertarian like Rand Paul could say,” he advised. “Until somebody can prove their definition of ‘rights’ doesn’t cost somebody they’re already God-ordained rights, the burden of proof remains. And right now we’re seeing these new ‘rights’ costing people their free speech and religious freedom rights that were established at the founding of this republic. And that’s something Americans of all persuasions on the marriage issue should be opposed to.”

As I’ve noted before, Ronald Reagan often spoke of a “three-legged stool” that undergirds what I call “complete conservatism.” The legs symbolize a strong national defense, strong free-market principles and strong traditional social values. For the stool to remain upright, it must be supported by all three legs. If you snap off even one leg, the stool collapses under its own weight.

Back in January I praised Republican National Committee Chairman Reince Priebus for making several public pronouncements in defense of the “social issues”-conservative Republican Party platform in general and the unalienable rights to both life and religious liberty in particular.

Reince, you may want to have a sit-down with your party leadership and tell them to get their head in the game. If they don’t, we, the GOP base, may just decide to take our ball and go home.

Understand this: We “social issues” conservatives (read: complete conservatives) will never stop playing the game. But if the Republican Party doesn’t quit moving the goalposts, we may just have to go stake out a new playing field.

The Collapse of Gender Sanity
b
a
x
r